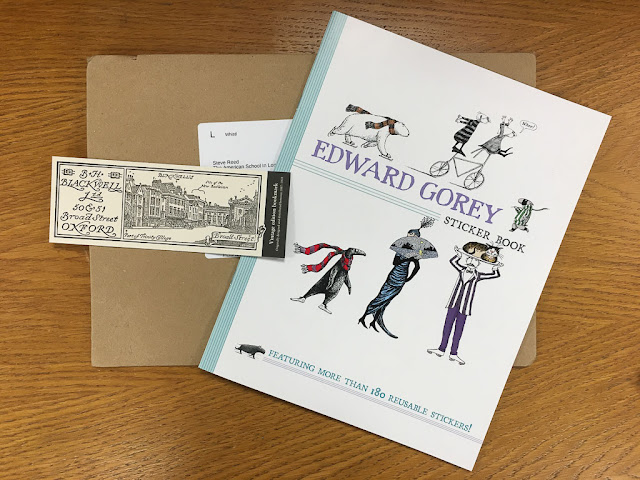 The most interesting thing happened yesterday. I checked my mailbox at work and found a slim parcel. This was inside -- a book of fascinating and curious little stickers that I never ordered. There was no note.

It came from Blackwell's, a book shop in Oxford. So I called Blackwell's, thinking there had been some sort of mistake. They confirmed it was ordered for me, but would not reveal the sender -- they said only that it was someone with a Gmail address (like half the planet). 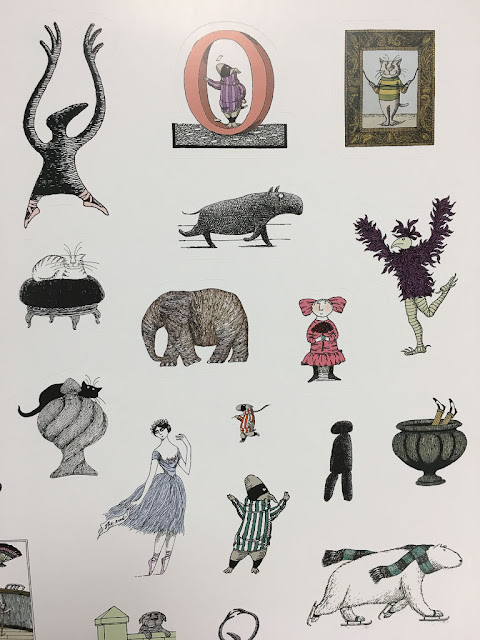 I have no earthly idea who might have sent me this or why. I love the little drawings, but I've never expressed an affinity for Edward Gorey, who was an American author and book illustrator. If you'd asked me before yesterday, I could have told you he was an artist, but that's about it.

Turns out he's known for his whimsical, vaguely unsettling depictions of Victorian and Edwardian characters and fantastic creatures, like someone's nightmare "Downton Abbey."

So I'm thinking there are a couple of possibilities here. One, it's a mistake -- someone ordered it and accidentally had it shipped to me rather than its rightful recipient. Somehow I think this is most probable.

Two, it's an anonymous gift -- in which case it's AWESOME but I wish the sender had given me a hint who sent it! I would love to thank that person for an interesting present that has made me learn more about an intriguing artist. (If it's someone out there in Blogland, THANK YOU!) 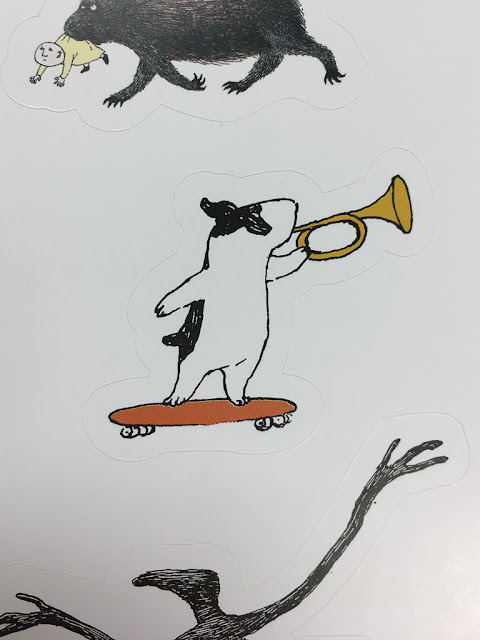 One of the stickers, by the way, does look a bit like Olga. And Olga does love her skateboards -- though she prefers chasing them to riding them. I'm not sure she appreciates bugling, though.
Posted by Steve Reed at 7:06 AM

What an intriguing mystery to keep you lying awake at night as you try to work out the secret penpal! And I love the pictures/stickers! Never heard of Edward Gorey before, but you have broadened my artistic appreciation all of a sudden.

And the annoying "pick the pictures" to prove I am not a robot has gone, thanks be!

I have visited Blackwells in Oxford...it has a huge basement .....it is like The Tardis !
Where will you stick the stickers ?

A wonderful if mysterious gift...

I swear I did not send you the Edward Gorey sticker book. If I was going to send you anything it would be a tube of ceramic glue so that you could stick together all those shards of pottery you keep finding.

how fun! I love Edward Gorey. we had three of his little books laying around when the grandkids were little. They liked me to read the Gashlycrumb Tinies which is an alphabet book of children's names and the gruesome ways they died.

Well , that's an interesting puzzle. Funny they wouldn't give you more info. That's why I think you're right that it's an anonymous gift from someone.

Odd, but fun. Like Gorey himself.
I've visited his house on Cape Cod; it was as whimsical as the man himself.
Maybe I like him because he reminds me of Charles Adams, who used to have the BEST cartoons in the New Yorker when I was a kid.

That's a very cool gift and a fine little mystery.

What an interesting mystery. I know Edward Gorey from the animated lead-in to Masterpiece Theater on PBS. I always enjoy seeing those drawings. I wonder if the mystery will eventually resolve itself.
I love Frances' description of Blackwells. Sounds like a bookstore worth visiting.

You can thank me, Steve. I didn't order the book but I'm always happy to be thanked regardless.

I learned of the work of Gorey from my daughter who took a course on children's literature and bought the Gashlycrumb Tinies and loved it. I've read Gorey described as a modern Tim Burton, which seems a good comparison to me.

And how do you KNOW Olga doesn't like bugling?? Have you ever given her the chance to try?? Get Dave right on it; he must have access to a bugle or two! lol

When the New York City Ballet was at Lincoln Center Ed Gorey went every night and held court in the lobby during intermission. He was easy to spot. looked like you would expect from his drawings, tall with full grey beard wearing a racoon coat and high top sneakers. I have an autographed City Ballet poster he did for them as a fund raiser.

What a wonderful gift! I love stickers (the child in me), although I'm not familiar with this artist. He's wonderful. Enjoy your gift. Hugs, Edna B.

What fun! And I love Catalyst's comment. I, too, like to be thanked even when I don't deserve it :)