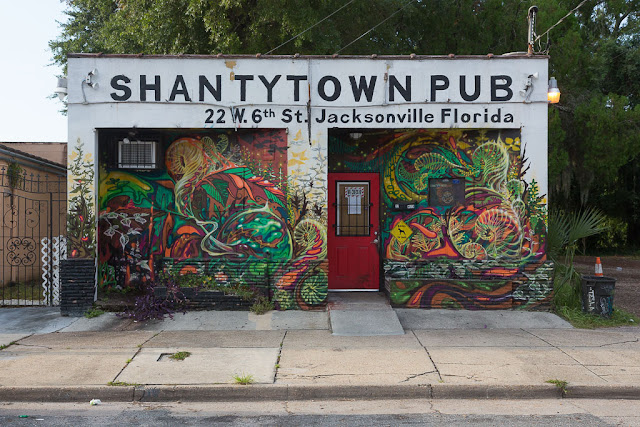 My brother takes my niece, Jane, to school every morning. She goes to school in downtown Jacksonville at a magnet school, so getting her there is no small feat. They usually stop at a neighborhood cafe for coffee (my brother) and a cookie (Jane) along the way.

On Tuesday, as they drove toward school with me along for the ride, I spotted this incredible shopfront. We went back yesterday morning for photos after dropping off Jane. Isn't that awesome?

And right behind it, parked in a grove of trees... 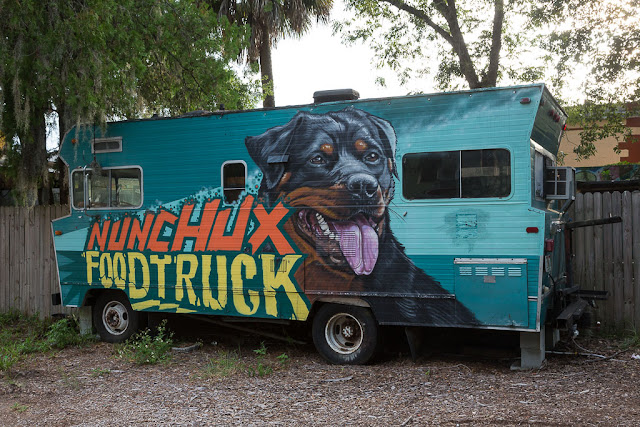 ...is this amazing food truck!

Mom continues to do well. Today she has an appointment at the beauty salon in her retirement center. She is in dire need of a mani/pedi. I think she basically stopped filing her nails at some point, and they're like talons now -- and my mom has never in her life had long fingernails. I keep teasing her about her Tina Turner nails. I told her she either needed to get them painted bright red or we were trimming them back!

Coincidentally, we've taken her to a local diner a couple of times on this trip and both times we've heard a Tina Turner song playing in the background over the restaurant's sound system. I told her, "It's those nails!"

My brother and I spent yesterday continuing to deal with some of Mom's remaining possessions. I make it sound like she has a lot of stuff but she really doesn't. It's just that it requires sorting and the task can be time-consuming. We took some stuff to Goodwill and my brother brought a lot of it to his house. He's painstakingly restoring a lot of Mom's cookware -- which is caked with lime from the terrible water at her retirement center -- by soaking it in vinegar. I had no idea this would work but the pots and pans do come out looking shiny. Like I said yesterday, he's going to store them, maybe for eventual use by Jane when she gets her own apartment in years to come. (She's in eighth grade now so that won't be for a while yet.)

I went to dinner with Mom last night at the little dining room on her memory care unit. I wanted to get a sense of what the other patients are like. They do chat and they seem to interact pretty well, so that was good to see. The food was hardly inspired (gray chicken chow mein and canned spinach, in my case) but it's the same as at the big cafeteria where Mom routinely ate before, so she's fine with it. At least it's easily accessible and nutritious.

I've been so immersed in all this I haven't had time to think about much else. I've barely been in touch with Dave, but he tells me London has had immense amounts of rain. I was shocked to come upon a picture in the Guardian of street flooding right around the corner from our flat! Fortunately our place is up on a hill so I think we've been fine but Dave tells me Olga hasn't wanted to go on her walks in that sorry weather.
Posted by Steve Reed at 11:45 AM

I am dying to know how the martinis are at the Shantytown Pub.

Beautiful pub! From a quick google it looks like a really fun place.
I'm so glad that your mom is settling in. When you go home you can at least be at peace about that.
Flooding in London? Oh Lord.

I can't even get Minnie to go outside and pee when it rains. glad to hear your mother is adjusting with no problems. but ick, institutional food.

I am reading Being Mortal by Atul Gawande. The book, on aging and the care of the aging, calls for a different way of treating the older, frail members of our society.

Interestingly, one of the doctors interviewed spoke of the importance of looking at the patient's feet. When an older person can no longer care for their feet they are far more likely to have falls. He uses that as one of the signs that the patient might need more help than they are getting.

Obviously, there are a lot more factors that are considered in the overall health of the person but I thought that was interesting.

Beautiful pub photo! Good you went back to get a shot of it. Really glad that your mom is settling in. I hope she makes lots of friends there so that it really feels like home.

Nice photos though it id s shame Jane could not go with you to take them. Is she still interested in your camera and lenses? Give my best to your mother/

I'm one of those weird people who always liked cafeteria food. Ha!

Love all the bright colors on that pub!

That's a bloody big dog on the side of the Nunchucx Foodtruck! I wonder if the picture was painted to scale. "There's a good boy and I am not a bone!"

Oh my, such beautiful artwork on the Pub. And that food truck is AWESOME! Nice doggie! My little Pogo is only five pounds but he thinks he's a big doberman. I'm glad your mom is getting along so well in her new place. Enjoy your time with her. It's precious. Have a wonderful day, hugs, Edna B.

I love the Shantytown Pub and the food truck. It makes me wonder if that pub is just as colorful on the inside.
Sounds like your mom is settling in well. The cafeteria food sounds a bit daunting but, if she seems okay with it I guess that's okay.
When I read your comment about rain in London, I went to the Abbey Road site to see if it was still raining. It seems to be but there is also something big happening at the studios right now. They've had to set up barriers to hold back the crowd and a news crew just showed up. I wonder who's in there!

Oh I do remember the toe nails in assisted living. When my MIL was in her facility they had a fleet of women who would come in, and do everybody's toe nails for $20. The assisted living place had out sourced it to these ladies. They were good and very fast. News is reporting that yesterday's session of Parliament was the most contentious ever. Boris is not universally loved, it seems. I'm glad that the move has gone as well as it has.

I was expecting YP to accuse Dave of just making up excuses to avoid walking Olga, but he didn't :)

I'm glad everything is continuing to go well with your mom. You and your brother are going to be tired out by the time the week is over. But it sounds like your mom is in a good place to get the care she needs.

My Mum always kept her nails looking nice, but that was one of the things to go when she got older. I often had to tell her to cut her nails!
(Just off to cut my toenails!! )
Yes, we did have a lot of rain. I drove to Luton on the " lower" road the day after the torrential rain, and it was flooded in quite a lot of places, though strangely the river wasn't " up". It passes through a lake at Luton Hoo and I believe they have sluices that are opened when the lake is full. I guess it needed filling up after all the dry weather!
Alexi won't go in the garden if it is raining......he made a mistake the other day....dashed halfway down the garden, realised, and dashed straight back in!

Great artwork! Glad your mum is settling in well.

Vivian: I'm not sure it's a martini kind of place!

Ms Moon: Apparently it has a bathroom with a dirt floor, or so my brother said.

Ellen: Sometimes the food is better. Yesterday's lunch, for example, was fine. I think I just didn't make a good dinner choice!

Linda: That IS interesting! I think my mom could still reach her feet if she had to, but she just doesn't think to do it. I could see how poorly maintained feet could destabilize a person.

Robin: I'm not sure Mom is super-social, but yeah, I hope she at least gets increased interaction, which I think will help her mind remain more limber.

E: We haven't done much with the camera on this trip because Jane's been in school!

Bug: I'm with you, actually! I love a good cafeteria! And as I told Ellen above, sometimes it's much better than other times.

YP: If that's the case, maybe the dog pulls the truck? It might not even have an engine!

Edna: Small dogs always think they're much larger than they are!

Sharon: I wonder what's up? It might have something to do with the 50th anniversary of the Abbey Road album.

Allison: I'm watching the Parliament situation from afar. It all looks like a real mess.

Catalyst: Yeah, it might be! I think it's quite a hipsterish place.

Jenny-O: Ha! I'm sure that's part of it. Dave will never argue if he can avoid walking the dog!

Red: Actually, Mom herself did much of the planning. She laid the groundwork for all of this years ago. We were very lucky in that respect.

Frances: I'm glad you didn't get severe flooding where you are! I think it sometimes takes dogs a moment or two to feel rain through their furry coats!