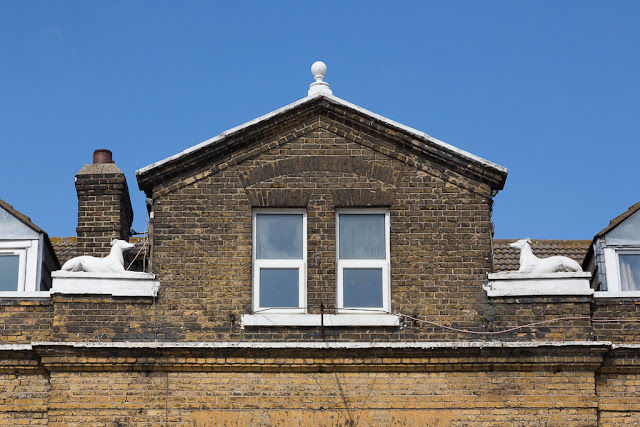 This is the top of a building on Lea Bridge Road in Leyton, which I noticed when I was visiting the Magic Fish on Sunday. That entire area was familiar -- I walked through there when I was shooting pictures for Bleeding London years ago -- and indeed the greyhounds at the top of this structure were familiar, too. Turns out I photographed them back then, in September 2015.

They haven't changed much. I wondered why they were up there. The building is used for car sales now, but I suspected it used to be a pub -- The Greyhound is a fairly common pub name. Sure enough, Googling tells me it was a pub that closed in 1997, after about 150 years at the site. (Apparently in its later years it was a nightclub with a "dodgy" reputation.)

There's pub history at every turn in this town.

I don't have much news from yesterday. I spent most of my spare time reading "Lethal White," the latest Robert Galbraith book. It was good, but dear God, it was long, too -- about 650 pages. I finally had to just sit down and focus on finishing it because I was sick to death of carrying it around! And job done. Now I can move on to something else -- hopefully something more compact.
Posted by Steve Reed at 6:51 AM