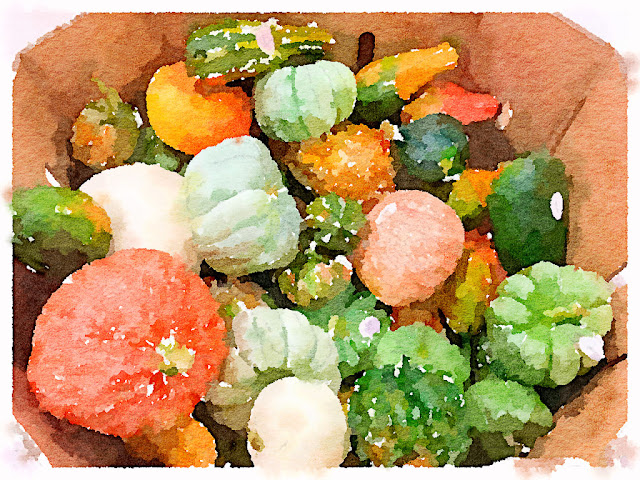 I've done nothing in the last 24 hours but clean the house and get myself organized. It always takes at least a day to recover from the chaos of traveling -- to unpack and do the laundry and pick up the cleaning and go grocery shopping. (Although, truth be told, Dave did the shopping. I just made room in the fridge by discarding some now-inedible leftovers from before my trip, as well as some creme fraiche that had become a biology experiment.)

Olga cut her paw on one of her walks in my absence (did I mention that already?) and left little blood spatters all over our floors. Dave cleaned it up -- he said when he got home on the day it happened, the house looked like an episode of "Law & Order" -- but I was still seeing blood yesterday so I gave everything another mopping. I think we're blood-free now, but I suppose if the cops showed up with one of those ultraviolet crime-scene devices things might still look pretty scary.

Anyway, because I barely went out yesterday, I don't have any pictures yet -- so here's a photo of some autumnal "heirloom pumpkins" on display at a Publix back in Florida. I would have called them gourds, but maybe they're edible. 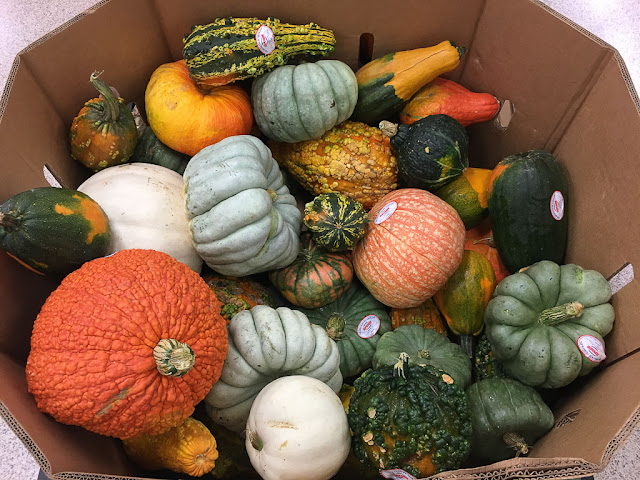 Here's the original, pre-Waterlogue shot. They are pretty, aren't they? I love that big orange warty one.

I felt awful yesterday, with jet lag and all that, but hopefully I'll be back on schedule fairly quickly. I always get so cold when I don't get any sleep -- it's like my body can't regulate its own temperature. I took a quick nap after lunch, which I usually try not to do, but that helped and thank goodness it didn't inhibit my ability to sleep last night. I feel fine this morning. Onward!
Posted by Steve Reed at 6:55 AM

If you have any tips for my upcoming trip so that I can avoid the jet lag thing, let me know!

If there were two orange warty ones you could wear them upon your chest and you'd look just like Lady Gaga. A pink beehive wig might also be required.

Love the gourds. I remember growing a variety of these on the allotment years ago. We varnished them and had them in a bowl, until they went mouldy, lol
Briony
x

Poor Olga! I hope her cut is all healed.
It's funny how when Dave goes out of town, cleaning out the refrigerator is one of your priorities and when you go out of town he probably doesn't give it a thought.

Traveling talks effort but it's worth it.

nice selection of gourds. gourds are weird things. are they edible for any creature? you are far too energetic for just getting home after a trip.

Love that waterlogue version. I can see it on a calendar for the month of October. I just saw huge pile of those orange, warty ones outside the Whole Foods store here. They were the size of pumpkins. I wonder what they are.

Poor Olga. I do hope that her foot is better now. It hurts my heart when my little Pogo is not feeling so good. Those gourds are beautiful. I really like the watercolor version best. It would look nice hanging on the wall. You have a wonderful day, hugs, Edna B.

Yes, I'd call most of them gourds. They make a pretty display at this time of year.

Those gourds are gourdgeous! Seriously, I love the variety of colours and shapes and textures.

Poor Olga - I hope her paw is healing okay. I know how much I hate having a cut on my hands, and it's got to be the same for animals.

Funny thing - both my husband and I have been finding the last year or so that when we get tired we are FREEZING. We never used to be like that. Have you always been this way?

Elizabeth: Sadly, I am no expert when it comes to avoiding jet lag. It's just a fact of travel. My only advice would be to get yourself on a schedule as quickly as possible and stick to it -- in other words, don't go to sleep when it's not bedtime, and DO go to sleep when it is, even if you're not tired.

YP: You have the strangest sense of humor, Mr. P.

Briony: Yeah, we had some on our coffee table one fall when I was a kid -- same thing happened!

Ms Moon: Ha! That's true! Dave completely ignores the refrigerator when he's here by himself. I think he had takeaway every night.

Red: That's true! I would never want to give it up.

Ellen: I'm sure something must eat them! Nature is like that!

Sharon: I don't know! The gourds I've seen in the past tend to be much smaller, but they have that same skin and color variation. Maybe size is what makes these pumpkins as opposed to gourds.

Edna: Olga seems fine now, but she's had a crazy couple of days, from her cut foot to her bee sting! (See next post.)

Catalyst: I think I'd have bought some if I were local to that store.

Jenny-O: LOL! "Gourdgeous" is a Poetry Monday word if ever I heard one! I don't remember making that connection between temperature and fatigue in the past, but yeah, I'm definitely like that now. Weird, huh?!