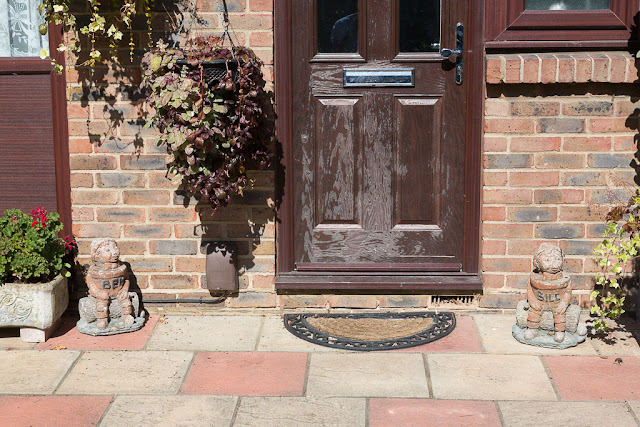 Last spring, when I posted about walking the Capital Ring through South London, I included a picture of some curious home decorations. Some of you immediately identified them as Bill and Ben the Flowerpot Men, who were the subjects of an old children's TV show on the BBC.

Well, when I was walking the last segment through East London over the weekend, I found these two figures on someone's patio. More Bill and Ben! Now at least I understand what they mean!

I just finished a book called "Red, White & Royal Blue." A co-worker bought it at an airport while traveling, and after reading it was conflicted about putting it in the school library collection -- she offered it to me for a second opinion. It's about a college-aged son of a fictional female U.S. president. The son falls in love with a British prince, and the two carry on a clandestine relationship that (of course) is eventually revealed to the public. At the end, as the president fights for re-election despite this revelation, and the prince and first son try to navigate their lives together, I actually got misty-eyed! On one level, it's completely silly, but on another, I found it quite entertaining and optimistic -- and in her afterword the author, Casey McQuiston, says she was motivated to write the book partly to give progressives some hope after the disastrous U.S. election of 2016.

As Booklist said in its review, "In between sweet and steamy love scenes, 'Red, White & Royal Blue' allows readers to imagine a world where coming out involves no self-loathing; where fan fiction and activist Twitter do actual good; and a diverse, liberal White House wins elections. This Blue Wave fantasy could be the feel-good book of the summer."

We added it, despite those steamy love scenes. I think it's fine for an older high school student, particularly at our school, which emphasizes tolerance and inclusion. I wouldn't check it out to anyone under tenth grade, though, and we'll have to be a bit careful because the cover is bright and cartoony and suggests a book for younger readers. The perils of the school librarian!
Posted by Steve Reed at 6:50 AM

SCHOOL LIBRARIAN ARRESTED
A librarian at a wealthy London school
was arrested yesterday afternoon by officers
from The Metropolitan Police Service.

It is understood that the man, in his early fifties,
has been accused of moral corruption, having
deliberately and with malice aforethought, added
a number of racy and pornographic novels to the
library shelves.

The perils of being a school librarian indeed! Although I do believe that Mr. P. is going a bit overboard with his fantasies.

Choosing books for a school library must be tricky at times. Happy you don't have to make those choices for some less progressive school in the southern US.

reminds me of the time I snuck Lolita off my parent's bookshelf. I don't remember how old I was, young enough that my mother thought it inappropriate when she discovered I was reading it and took it away. I waited a couple of weeks and snuck it back off the bookshelf and finished it. for all the hoopla surrounding it, I thought it pretty tame for its reputation.

Librarians aren't given enough credit for having a very good library.

When I was a young girl, Peyton Place was the racy book that we all wanted to read. I think you are right though. The book does belong in your library. I think that door entrance is very inviting. You have a wonderful day, hugs, Edna B.

YP made me laugh out loud. Yes, the book belongs in the library. Good call.

I vote for putting that book in the library too. I like the author's motives for writing. We certainly could use something to makes us forget the current mess we are in. I had to smile at Ellen's story about reading Lolita because I had the same reaction when I read it. I couldn't figure out why people thought is was so bad.
Bill and Ben the flowerpot men....how cute.

I'm with the others who applaud you for putting the book in the library. But if YP is correct, good luck in the gaol, Steve! :D

Sounds tame compared to what kids can access on the internet!!

Mary: Happily, we almost always err on the side of inclusion here. It would be trying in a more conservative environment.

Ellen: I had the same experience when I read Lolita. The language of the novel itself isn't provoctive -- it's just the idea that a much older man would develop an infatuation with a young girl. Kind of like "Death in Venice" -- same thing.

Red: Actually, people DO compliment the library all the time. Perhaps they're not aware of the level of deliberation that some books get, though!

Edna: Yes! I read Peyton Place back in the early '80s when I was a teenager. By that time it was fairly tame!

Sharon: "Red, White & Royal Blue" really IS a feel-good book. By the end I was thinking, "Oh, if ONLY the world worked this way!"

Catalyst: Hopefully it won't come to that! LOL

Jenny-O: Exactly -- I thought that too. Kids nowadays have access to so much mature content. This is NOTHING compared to a lot of the stuff they see!