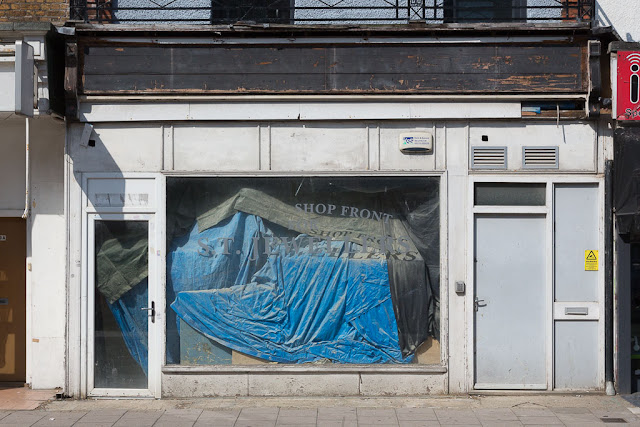 I shot this shopfront when I was in Margate early last month. To hear some people tell it, the whole country is going to look like this after Brexit -- shuttered and dusty, shops devoid of food and drugs, factories stymied by lack of supplies and markets to sell their products. Fun times!

Seriously, some of you have asked about Brexit -- how it will work (or not work), what its effects will be. I haven't immediately addressed these questions because I'm no expert, and to be honest, nobody seems to know! There is no consensus. Leavers seem to believe that when the UK gets out of Europe we'll be newly invigorated and any ill-effects will be mere inconveniences; remainers say people will literally die. You couldn't have two more extreme responses.

Here's the situation as it stands now: Britain is scheduled to leave the European Union on Oct. 31. We do not yet have an agreed-upon deal that governs issues like trade and, crucially, the Irish border. (Ireland is an EU state; Northern Ireland, after the end of October, will not be.) Boris Johnson, our fluffy new prime minister, wants us to leave on Oct. 31, whether we have a deal or not, and sort out the consequences afterwards. Parliament says we cannot leave before we have a deal. Thus, the government is deadlocked, with the next option being to call new elections and bring in a whole new government. (This summary relies on my somewhat foggy comprehension of British politics, but I'm pretty sure that's all correct.)

What's scary at the moment is how thoroughly the British political system is mired. I've never seen a government so bogged down. I am no fan of Brexit -- it was a huge mistake to start this ball rolling with that 2016 referendum, and as I've said from the beginning, that vote was a disaster. But I do think we have to move ahead. To mix my metaphors, we're stuck in a washing machine, going around and around, getting more faded and battered and tired on a wash cycle that never ends. We have to get out of the darn machine.

It's no wonder Russia has been implicated in manipulating voters both here and in the United States. It's Vladimir Putin's dream, to see western Democracies churning and preoccupied in this fashion. He couldn't ask for more.

To that end, I think Boris Johnson may be right in saying we should leave on Oct. 31, deal or no deal. We have to put a stop to this. Sadly, I think it's probably too late to go back and readdress the Brexit question. We're not going to see a second referendum, and frankly, many voters are so insanely stubborn about it that I'm not convinced the results would be much different anyway. So let's just make this horrible, misguided exercise happen, and live with the consequences. It's going to cost jobs and cause misery, and I truly fear for continued peace in Northern Ireland and the future of the UK itself -- Scotland may demand independence -- but those cats are out of the bag.

On a selfish personal level, I don't think it's going to affect me or Dave a great deal, at least not initially. The school will continue to operate. Dave takes some medications for his Crohn's, but even in a worst-case scenario where they become unobtainable -- which is hard to imagine -- I don't think he would suffer in the short term. We can live without certain kinds of fresh produce and whatnot, again in the short term. (This all assumes the British government can renegotiate trade agreements in fairly short order -- but given the recent paralysis that may be a pipe dream. I don't know squat about international trade, really. That is above my pay grade.)

So, the short answer to all your Brexit questions is...who the hell knows?! 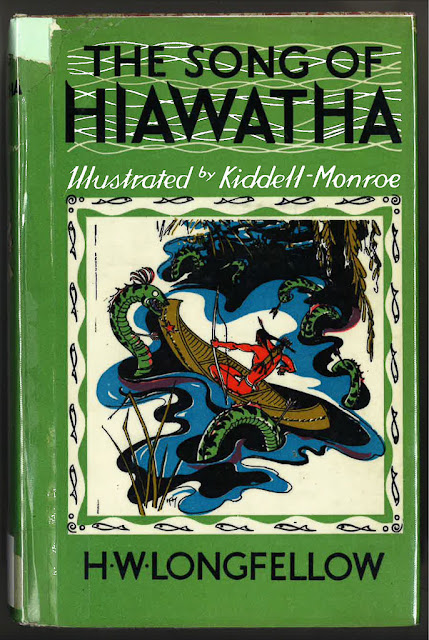 I can't believe I forgot to include this book cover in yesterday's post. This is a 1960 edition of "Hiawatha" with a fabulous cover (and equally fabulous inside artwork) by British illustrator Joan Kiddell-Monroe. I love this book. I've never read "Hiawatha" (it's incredibly long); all I know are these few lines:

By the shores of Gitche Gumee,
By the shining Big-Sea-Water,
Stood the wigwam of Nokomis,
Daughter of the Moon, Nokomis.

And blah blah blah, it goes on from there. Weirdly, I used to live near a town in Florida called Nokomis. Maybe if Brexit is even more of a disaster than I imagine, Dave and I will move back there -- if Hiawatha will have us.
Posted by Steve Reed at 6:42 AM