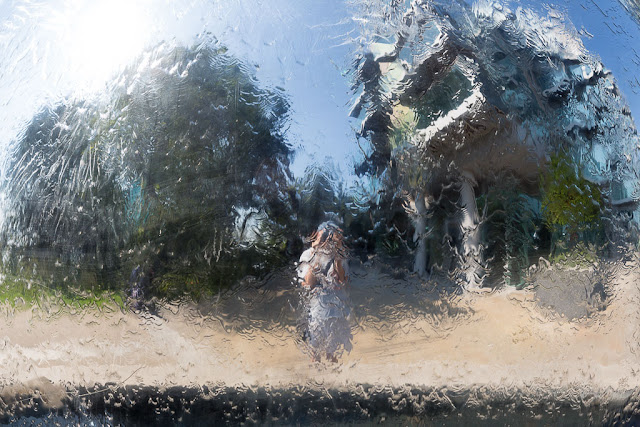 When I was a kid, I lived with my mom but I stayed with my dad and stepmother on Friday nights and Saturdays. Every Saturday morning we'd go grocery shopping, which could be a pretty complicated affair because my stepmother was adventurous and skilled in the kitchen and a member of a gourmet cooking club. While Dad and June shopped, me, my brother, my stepbrother and stepsister were turned loose in the shopping center and allowed to explore.

We shopped at Food World, which doesn't exist anymore, located in a strip mall off Florida Avenue in north Tampa. There was also an Eckerd Drugs, a Hallmark card shop, a laundromat, a Radio Shack. We'd go to the Danish Bakery in Food World and get a free cookie. We'd sit in Eckerds and read comic books and magazines with our sticky fingers until the employees kicked us out. We'd go to Sherry's Hallmark and admire the ceramic animals and glassware and whatever else glittered on the shelves. We'd go to Radio Shack and dream about stereos and video games.

One day, when we were about 11, my stepbrother and I got especially adventurous and went through the laundromat and out the back door, to the back of the shopping center. I suppose we just wanted to know what was behind the building. Nothing but a strip of asphalt and a swamp, as it turned out, but there was a big trash dumpster. Of course we looked inside it, and what did we see? A woman's purse, lying on top of the debris.

One of us climbed in and retrieved the purse, and we carried it over to the curb, sat down, and started going through it. There was a blue leatherette case containing a pack of cigarettes and a lighter, a pair of sunglasses, and some other stuff -- but no cash. If there was a wallet, it was empty. It seemed strange that someone would throw all this in the trash, but we figured it was ours now. Finders keepers, right?

Suddenly a very angry woman stormed out of the laundromat and began yelling at us. Of course it was her purse, which someone had taken from the counter in the laundromat -- and of course she thought we were the thieves! We tried to explain we'd found it in the trash, but she was hearing none of it. She said she was calling the police. My stepbrother and I had our standard default reactions -- he got angry, and I cried.

Finally she let me run to Food World to get our father. I remember running up to him in the store, blubbering away in a state of panic. He came back to the laundromat and calmly defused the situation. I don't remember what he said to the woman, but he must have been convincing because eventually she collected her plundered purse, the cigarette case, her sunglasses and whatever else we'd found, and she let us go.

It's funny how it never occurred to us that purse might be stolen. We thought someone had simply thrown it away!

It wasn't the first time we found suspicious stuff at the shopping center, either. A few years later we were exploring some adjacent woods when we found a photo album full of nude pictures -- and we recognized the guy in the pictures as a neighbor! (Dad burned the album.)

Who said suburbia was boring?

(Photo: A self-portrait in a reflective globe on a fountain, a couple of weeks ago.)
Posted by Steve Reed at 6:34 AM

I love this whole post. It's so evocative of a particular time and place.

Wow, I remember that shopping center though I did not go there more than twice...I love how you could wander around worry-free.

Your photo looks like a painting. What a good eye you have for capturing a moment. Very cool.

Childhood can be a very strange and confusing country.

I see your career as a finder and bringer home of trash began early.

I can understand the woman's thinking. You guys were lucky to get out of that one.

Your photo is Inspiring!
What a great story, I could FEEL the entire adventure, especially the awkward and terrifying woman finding you. Oh dear. Glad you did not pocket the lighter and the glasses, that would have given her reason to throw you in the slammer! So glad you stayed out of juvie, that could have damaged your sweet soul

I totally enjoyed this tale of Boys Gone Wild (or would that be feral?). I don't remember ever being left to run around anywhere like that alone - I wonder if I was just too timid to stray from my mother?

I see where your adventurism comes from. You and my brother would have gotten along just fine. He loved to go dumpster diving. You'd be surprised at the things he would find. I just love that self photo. It is so very interesting. I studied it awhile trying to figure it out before seeing your explanation. You have a super day, hugs, Edna B.

That is such a wild story. What an experience it is to be accused of stealing something when you are totally innocent, and to be confronted by the victim. One of those unforgettable life moments. Beautiful photo.

What a fun childhood story and you told it very well. I was getting a bit tense after you plucked the purse from the trash because I just knew that wouldn't end well. I'm glad it finally did after a little adult intervention.
I love your artistic photo. At first I thought it might be a photo of a painting.

Wow, this is a short story! I knew at once the purse was stolen, but then, I'm grown. I wonder what the photo album was doing in the woods, and I wonder if "nude pictures" is a euphemism? Fascinating post.

How sad that your father burnt the album. He should have gone right up to the neighbour's door, knocked on it and returned the album - pointing out which pictures he most admired and why.

Wow! What a childhood!

I love that photo - very cool.

How awful to not be believed by an adult, when you're innocent. I'm glad your father was able to settle things.

My niece had her purse stolen from right next to her while she ate at a McDonald's - it was found within the hour in the dumpster behind the restaurant. Minus her cash, of course. I guess a dumpster is a logical place for a thief to dispose of the recognizable part of their ill-gotten gains.

Elizabeth: It's very '70s, isn't it? To let your kids run around a shopping center on their own!

E: Well, not entirely worry-free -- we did get into a little bit of trouble! LOL

Mary: Thanks! Reflective surfaces of all kinds always intrigue me.

Ms Moon: Absolutely. We didn't realize we were doing anything that could be construed as wrong or bad.

Ellen: And I didn't learn my lesson! LOL

Red: Oh, definitely. I'd have thought the same thing. I don't blame her at all!

Linda Sue: I think we intended to keep some of her stuff, but we never got far enough into our plunder to sort it all out!

Bug: I think because we were all together our parents thought it was pretty safe. Which it was, given the time and place.

Edna: I still love a good bit of dumpster diving, as readers of this blog know!

Robin: Definitely unforgettable. I still remember what she looked like.

37P: Yeah, it seems obvious now that it would be stolen, but what do kids know? Nude is a little bit of a euphemism, yes -- there were other people in the photos, and a variety of activities, LOL! I remember we couldn't figure out how he'd even get those pictures processed.

YP: I remember arguing that Dad should return the album! I didn't fully appreciate how embarrassing that would be for everyone involved.

Jenny-O: Yeah, I guess it's SOP for petty thieves. Who knew? Certainly not us!