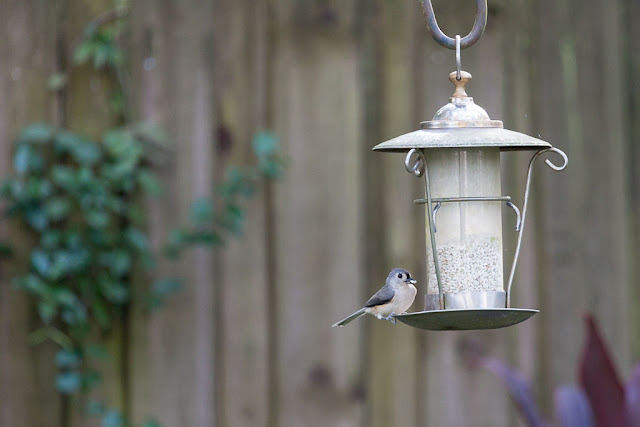 My brother and I spent part of yesterday watching birds on his backyard feeder. There were chickadees in the morning and tufted titmice (above) in the afternoon. 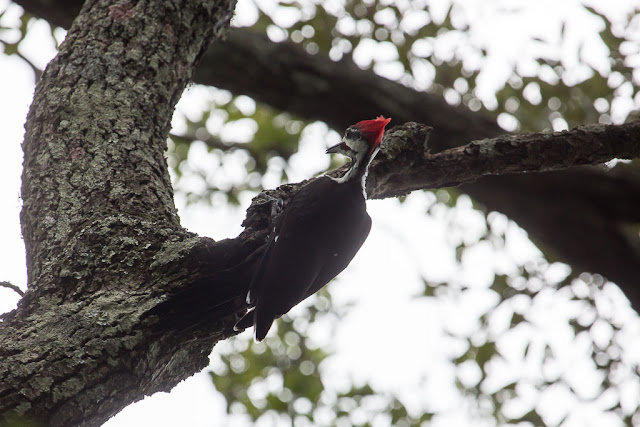 We also saw a big ol' pileated woodpecker in a tree above his driveway -- its forceful pounding dislodged a dead branch that fell on my brother's recycling bin and scared us. (We were afraid it hit the car.) Doesn't that bird look very punk-rock, with a red mohawk? Or maybe kind of Bowie, with streaky eye makeup. 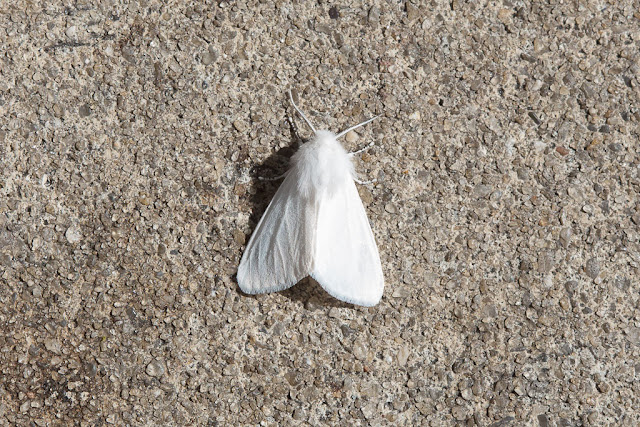 At my mom's retirement community we saw this white moth on the sidewalk. I think it's either an agreeable tiger moth (Spilosoma congrua) or a fall webworm moth (Hyphantria cunea). I'll be darned if I can tell the difference, especially since I didn't get a good look at its underside. We gingerly moved it off the path and onto some nearby grass.

We took Mom to lunch at Five Guys, where I had a hamburger and fries and a vanilla shake and then felt like I didn't need to eat for the rest of the day! (It was a good burger, though.) Today we'll go back and while I take her out for breakfast and maybe a visit to a park, my brother will supervise her move. We hope to have it all done by the time I bring her back in the afternoon. Fortunately she doesn't have a lot of stuff.

I haven't really blogged about why she's moving. I want to protect my mom's privacy and not go into it too much, but suffice to say that her memory, cognition and communication skills have been failing for a couple of years now. She was fine living on her own until fairly recently, but it's getting to the point where she loses track of time, forgets (or refuses) to take her few medicines, doesn't eat well and shuts herself inside alone. So she's moving to an apartment where she will have some assistance in staying on a schedule and hopefully interacting a little more with people (while maintaining a private residence).

The new unit is smaller than the one she's in now and she won't have a kitchen -- but honestly, she doesn't cook anymore (and shouldn't be cooking) so I'm not sure that will matter. We're going to set it up as similarly to her current place as we can. She's not going to like this change, as I said, but I'm planning to stay with her the rest of the week and I'm hoping that will help her settle in a bit. 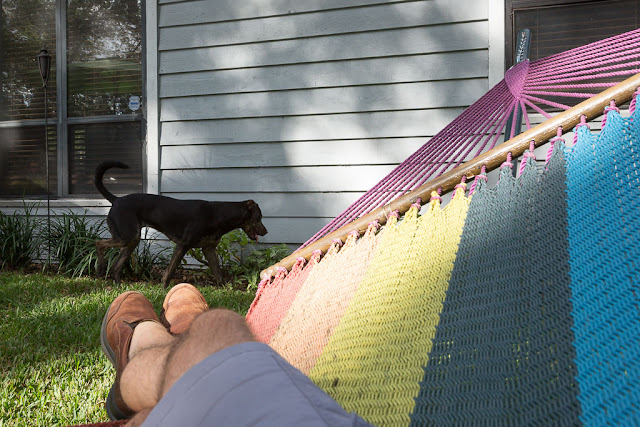 As I lay in the hammock in my brother's yard last night, decompressing from yesterday and dreading today, his dog Queens stalked lizards in the bushes. She's obsessed!
Posted by Steve Reed at 10:40 AM

Your mom is so fortunate to have two good sons looking out for her. Good luck to her and the two of you during the move and through the changes.

It ways a lot about the wonderful sons she has, and what a fine mother she is, that her sons would take time out of their busy lives and travel so many miles to take such good care of her when she needs it (even though she might object to "needing" help).

And that moth is so regal looking, with its fur shrug and pure white robe. Isn't it a white ermine?

This brings up a lot of stuff for me concerning my mother. Hard to talk about sometimes.
But what can you do? Her safety and ongoing health have to be the priority.
Life is hard, isn't it? I hope this is a gentle landing for her. I am so glad she has you and your brother.

I agree with Vivian - what a regal looking moth! I also like the picture of you kicked back in the hammock (well of your legs). I like the color and the determined dog :)

Your mum is lucky to have two caring sons - one of whom will literally fly across an ocean to assist her - when he is not lounging in a hammock like a sultan of swing!

so this leaves me wondering if you and your brother have told her she's being moved to a new apartment or if you're just going to spring it on her when you get back from your outing with her. if it was me I wouldn't like that so I hope y'all have discussed this with her and why it's necessary. sad to hear your mom's cognisant abilities are failing. it's the future that awaits all of us.

when cognition and memory are compromised , it becomes essential to get help and to live in an altered more controlled environment, and that can be difficult for those who have been independent all their lives. You are doing the absolute right thing for her and I admire you guys.
That moth is the loveliest thing I have seen all month! I may try to make one.
Thank you for taking such good care of your MOM, My sons would not be quite so thoughtful I am afraid.

Your mom has two very loving and thoughtful sons. What you are doing for her can really make a huge difference in her life. I hope the move goes well and smoothly for all of you. Love seeing that Pileated Woodpecker. What a beautiful bird in every way.

That pileated woodpecker is a sight to see. We don't have that variety here in the southwest. They are such unique looking birds.
I hope the move scenario is going well today. And, I hope your mother finds it beneficial to have the help and the company. She's lucky she has you two to help and to make sure she's safe.

With Queens stalking lizards and Olga pursuing squirrels the world would be a happy place.

I hope your mother adapts well to her new apartment and her new life. Moving and change, quite frankly, is a bitch.

Your presence will definitely help your mom get settled. It must be gratifying to have raised sons who are so fully there for her.

My siblings and I went through a similar thing with our mother, who struggled with end-stage Parkinson's. She was dead set against moving to assisted living, but there was no alternative. She ended up living there for a number of years and LOVED it. No guarantees that will be the same for your mom, but if they have a good dining plan and she makes a few good friends, she might very well thrive for the last years of her life.

Some good! Some bad!The elderly have a bad time of it. they become irrational and it's hard to get them to do the right thing. On the other hand to sit in a back yard and watch birds aint bad!

The day is over now and I hope it went well for all of you. I'm thinking what a good idea for you to stay with her for the first week to ease the change. Good luck.

Great photos. That moth! Reminds me of a princess or an angel or a fancy ice skater, with the all-white colour scheme and the fringe of ostrich feathers!

This is such a hard time -- dealing with aging parents and all that comes with it. Your mother is blessed to have you. I hope it all goes well for her.

I do hope that your Mum will be happy in her new place. As it has been said before ,she is blessed to have 2 sons who care and are able to help her move. I hope that at least one of my 3 boys will keep an eye on me if the time comes when I need it!
My Mum managed to stay in her own home ( with carers coming in ).........until she passed away aged 98. She would have absolutely refused to leave had it been necessary!
You are missing torrential rain here...set in for most of the day I believe. Alexi will have to wear his raincoat ( which he hates) when we go out for him to do his " business" !! We are going to get soaked!

I'm glad she has you two looking out for her best interest although this is an extremely difficult situation. I hope your plan to help her settle following this move will be successful and that you have the chance to enjoy your time together.

I think you and your brother are wonderful for caring so for your mother. I'm old, and if my kids try moving me I'll most likely give them a hard time. Us old gals can be cantankerous when we have to be. hahaha. I hope your mom will be happy with her new place. Have a super day, hugs, Edna B.