Our Own Little River 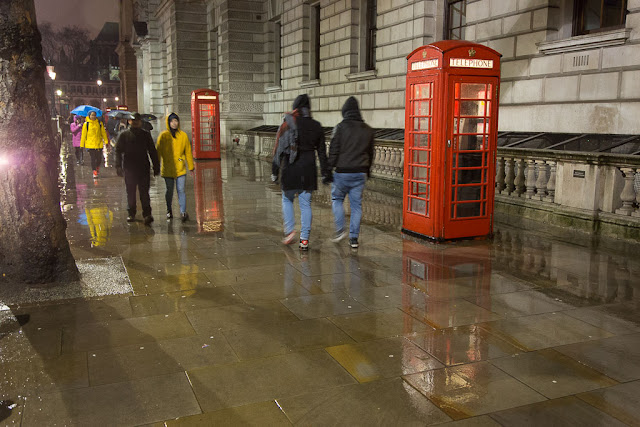 There's a river flowing past our front door.

Yesterday, when I took Olga out early in the morning, I noticed a fairly substantial amount of water running down the gutter -- definitely more than the trickle that would come with a rainstorm. Plus, there was no rain to speak of. So I walked about five houses up the street and found the water bubbling up from a seam between the concrete gutter and the asphalt roadway.

I called our local water supplier, and the woman on the phone said no one had yet reported the leak. She said they'd send a crew "within the next 24 hours," which seemed like a rather blasé response. "It's a fair amount of water," I reiterated to her.

Sure enough, when I got home yesterday evening, it was still flowing. But -- progress! A couple of guys were at the site of the leak, sitting in a truck in their yellow work uniforms, waiting for the authorities to come and close the road. This morning, barricades have been erected, the site of the leak has been excavated and there's more water flowing than ever:


I can even hear it while standing in the front room of the house.

Our own water pressure is down, but the water doesn't seem to be off entirely. I could make coffee, thank God. I wonder why they didn't turn off the main overnight? Maybe they can't, for some reason.

Anyway, it makes me wonder about the state of our pipes. Remember when I was in Florida a couple of years ago, and we had a broken main right in front of our house?

We had another named storm yesterday, too -- Georgina, I think -- but she wasn't of much consequence here. Rain and a bit of wind but nothing scary.

And last night, Dave tried a new vegetarian dish -- a kind of vegetable stew with mushrooms served over riced celeriac. Dave didn't much care for the celeriac -- he called it "baby teeth," and after he said that, that's all I could see in my bowl. Baby teeth. Disturbing! Maybe next time we'll stick with plain old rice.

(Top photo: Phone booths on Whitehall near Parliament Square.)
Posted by Steve Reed at 6:33 AM