The Hole and the Grammys 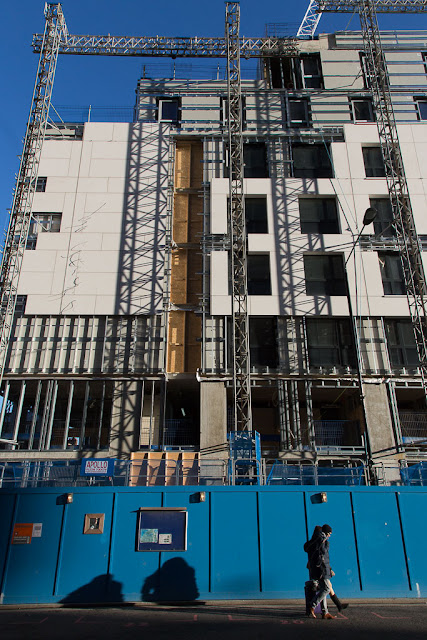 We have a little storage closet beneath the stairs off our entrance hall -- a sort of triangular space with a slanted roof, way too small to step into but large enough to hold boxes and shelves. My Dad's house in Florida has one just like it, which we've always called "the hole" -- so it's not surprising that I call our London version by the same name.

The hole tends to gather empty boxes from Amazon and plastic bags from those shopping trips when we don't have our reusable bags handy. Plus gift bags, tote bags, wine bags, used bubble wrap and all manner of small household repair items, like extra pieces of tile and painting supplies from the last time this flat was painted (which, trust me, must have been a long time ago).

This heap of stuff -- some of which pre-exists our tenancy -- had grown to mountainous proportions by the time I opened the hole last week and finally realized it had to be cleaned out. So Sunday night I pulled all the bags, boxes and packaging out into the foyer, and separated it into piles for recycling. I took whatever bags could be reused to work, where we sometimes give them to library patrons who check out a lot of books. I saved a few for us, but only a few.

Somewhat disturbingly, I found evidence of past rodent activity at the bottom of the heap -- scattered droppings (or what I think were droppings) on the lowest layer of bags and floor. But I don't think it's a sign of any current infestation. Nowadays, there's nothing to eat in "the hole." We used to keep bags of bird seed in there but we stopped specifically because I was afraid we'd get mice. I guess we didn't stop early enough, though I never saw any chew marks on the bird-seed bags or anything like that.

Anyway, I threw away the bottom-most bags and vacuumed it all out and now the hole is bare and tidy. And we have a mountain of stuff for the recycling pickup on Friday. You're welcome, Ms. Landlord.

In other news, I've been reading about the Grammy awards. I must say I know virtually none of the artists who won the top trophies -- I've vaguely heard of Bruno Mars but I couldn't tell you what he sings or even what he looks like, really. (I do know Kraftwerk and Leonard Cohen, for what it's worth.) I've listened to some of the nominated stuff on iTunes but it's mostly not my bag. A Times critic seems to feel that the awards still haven't fully acknowledged the power of hip-hop and, because of forces like subtle racism and ageism, the show remains "unimaginative and risk-averse." I just think that, at 51, I am officially too old for the Grammys.

(Photo: Near Aldwych, east London, last month.)
Posted by Steve Reed at 6:34 AM