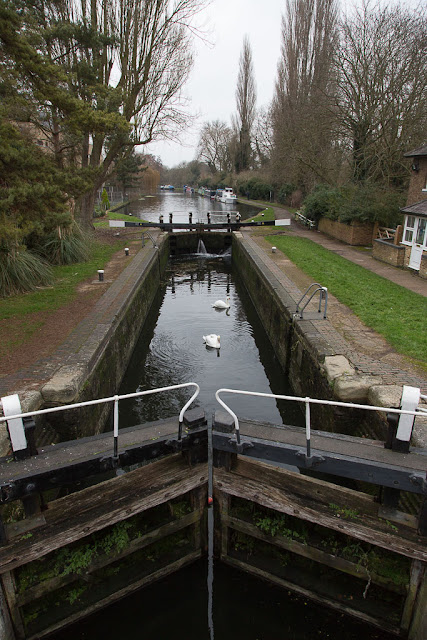 I tackled two more segments of the LOOP yesterday, walking about ten miles from Uxbridge to Moor Park in Northwest London. (I did this partly to take my mind off my dentistry -- as I told a friend, "Hopefully achy legs and back will distract from achy tooth!")

Above is Uxbridge Lock, near the beginning of my walk along the Grand Union Canal. The locks allow for changes in elevation along the canal's route. 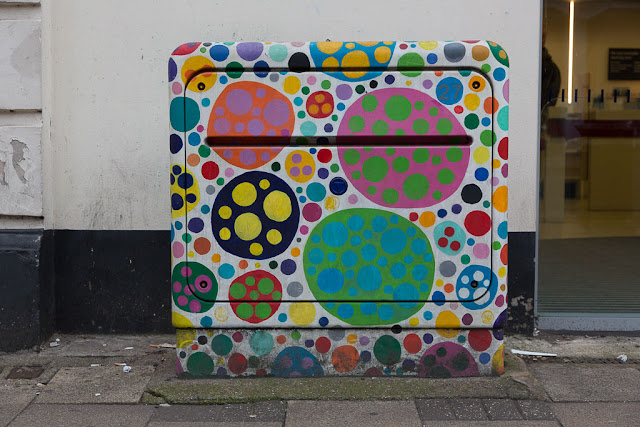 In Uxbridge, before I started, I came across this incredibly groovy utility box. If only they all looked like this, rather than just olive drab! 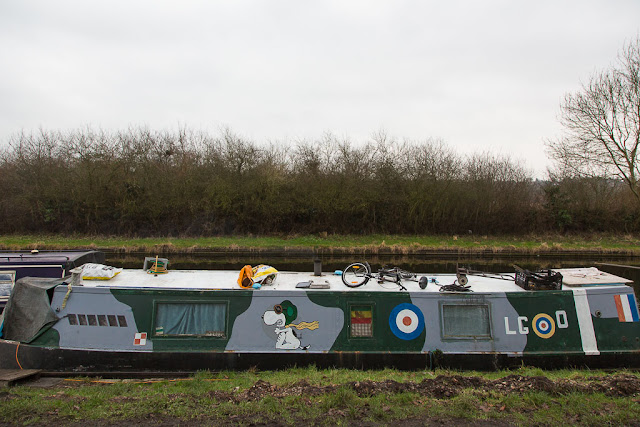 The first half of the walk followed the canal. The map called it the "bluest" section of the LOOP, because of all the water -- but there was nothing particularly blue about it yesterday. I enjoyed looking at all the boats, as usual, with names like Firefly, Tiger and Hedgehog, and this apparently nameless craft with a Snoopy theme. 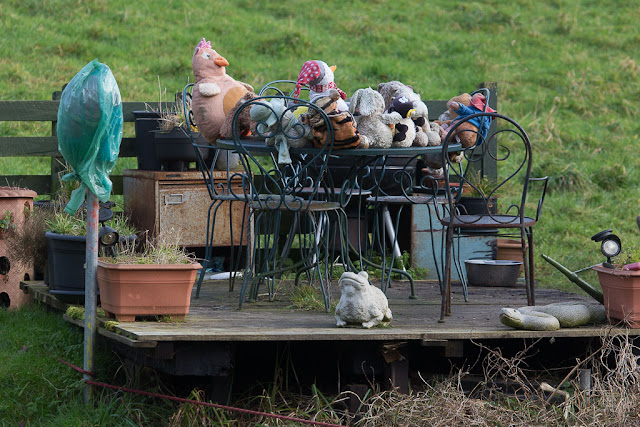 Next to one boat, someone had set out what looked like a tea party for weathered stuffed animals. 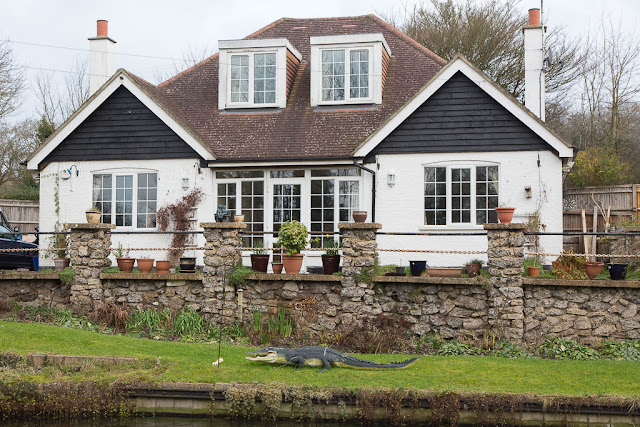 And as a Florida boy, I had to appreciate this house, with its big fake gator sitting on the canal bank. (There's a disembodied mannequin arm lying next to the gator's mouth --  someone has a sense of humor.) 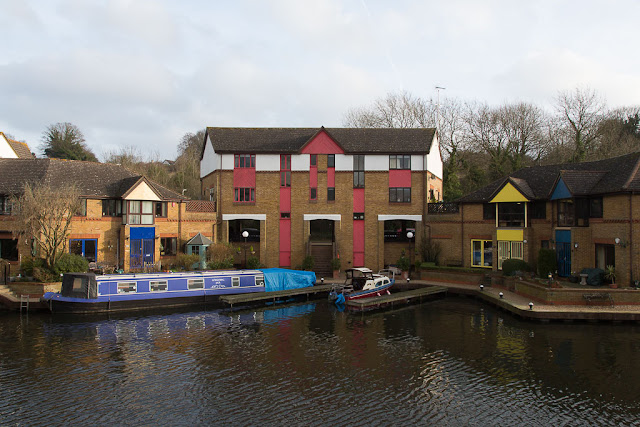 Just before I left the canal, I passed these colorful flats near Harefield.

And then my route turned eastward and I found myself walking across farmland and through a conifer forest. 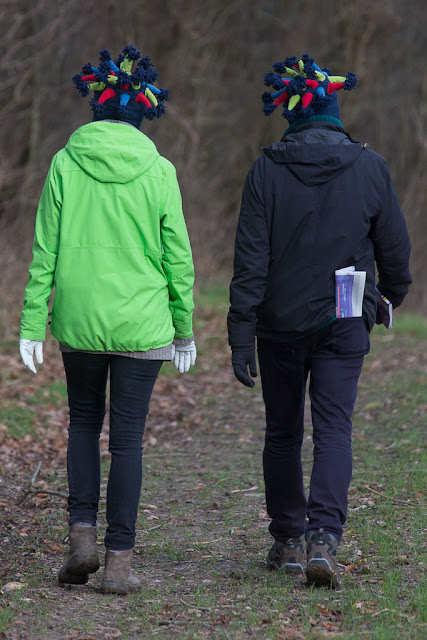 These two passed me along the way -- which surprised me a bit, because I walk pretty fast and usually I'm the one passing other people! Clearly they are seasoned trekkers. I loved their matching headgear. 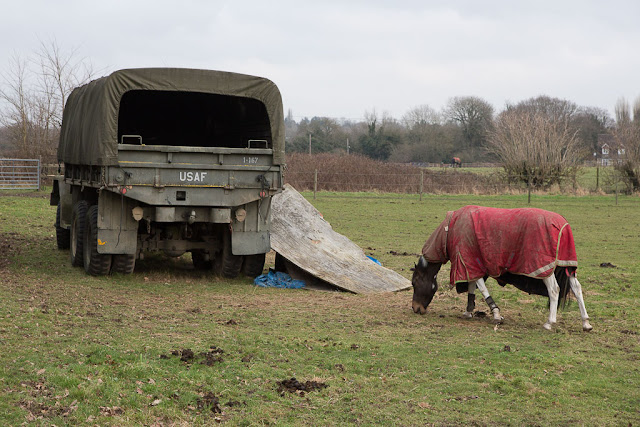 I found this old U.S. Air Force truck in a horse pasture. The USAF used to have a base somewhere near Ruislip in West London, I believe, as well as other bases around England -- so who knows where it came from. It looked pretty old. 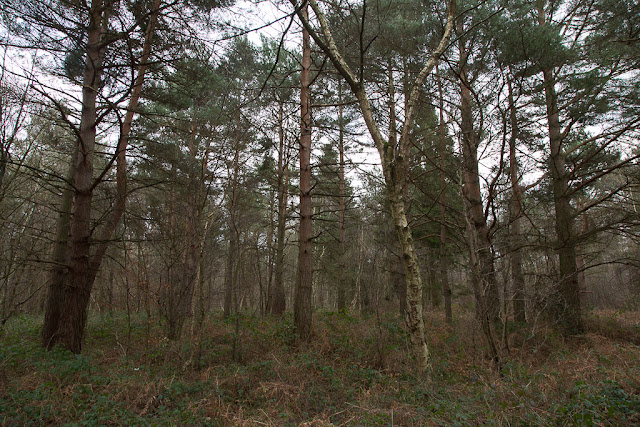 Here are the conifers in Bishop's Wood, near Moor Park. The pathway on this section of the walk was a nightmare -- very churned up and muddy. It bore the telltale imprint of horseshoes, but it seemed like it would have been treacherous going for a horse.

I stopped at a pub called Ye Olde Greene Manne for a hamburger and a pint of London Pride, before ending amid the well-groomed suburbia of Moor Park. And the walk did distract me from my tooth!
Posted by Steve Reed at 5:39 AM