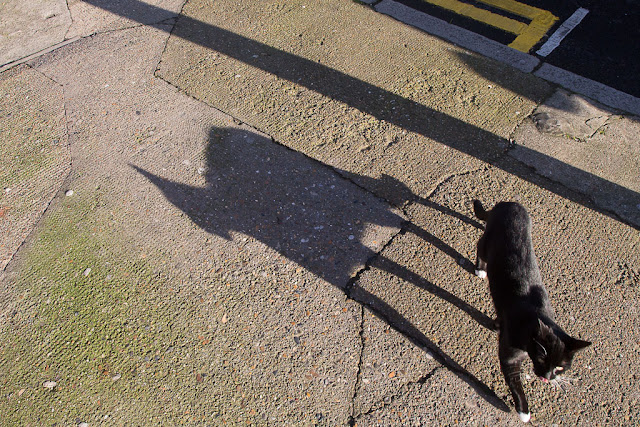 I learned a few interesting things about our river.

For one thing, and most importantly, it is no longer flowing. The workers were out on Thursday and seem to have wrapped up the problem, though there was still a torrent in the gutter on Thursday evening. Later that night it stopped and yesterday, from what I saw, the street was dry -- but there's still a big barricaded hole.

Apparently the crew had been prepared to entirely repair the pipe on Wednesday night, but one of the neighbors complained about noise. So they had to pack up and let the water flow all night before re-attacking the problem the next day. Several of my other neighbors were incensed at this wasteful delay, as I found out at an informal riverside gathering on Thursday morning, and I have to admit I don't know why the water company didn't simply tell the complainers this is an emergency and to suck it up.

Also, Dave said the workers told him that while repairing the broken pipe, another section broke -- so they had to enlarge the hole and fix that too.

We're just happy because we have water again -- we always had it, through this whole ordeal, but sometimes the pressure was incredibly low. Now we're back to normal, the street is dry, and hopefully (cross fingers) we'll stay that way!

(Photo: A friendly street cat in Shoreditch, late last month.)
Posted by Steve Reed at 7:51 AM