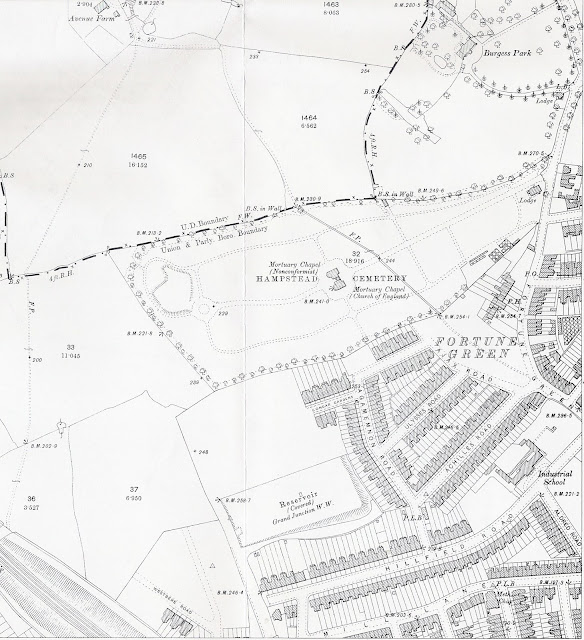 A few days ago, someone donated some odds and ends to the library where I work. The papers included reproductions of old survey maps from 1894 depicting various parts of North London, including the areas around West Hampstead. I got a kick out of looking at these maps and since they show areas I often mention in this blog, I thought you might like them too.

Above you'll see what the region around Fortune Green and Hampstead Cemetery, where I often walk Olga, looked like 124 years ago. To the left of Fortune Green are the so-called "Greek streets," named after heroes like Agamemnon and Ajax. North of the cemetery, it's all just farmland. 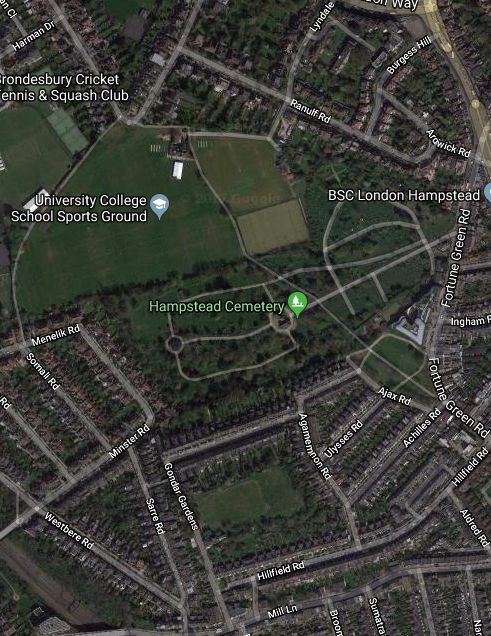 This is what the same area looks like today. As you can see, west of the "Greek streets" and surrounding the former reservoir, more neighborhoods were built -- including Gondar Gardens, where I also frequently walk with Olga. And north of the cemetery there are now athletic fields and more neighborhoods.

That reservoir, incidentally, is still open space, but it's the subject of occasional development schemes. The most current, I believe, is a plan to turn it into an upmarket retirement community. Unfortunately the property is fenced off and inaccessible, so I don't walk Olga there.

Even more pertinent, at least to me, is this area -- which is where Dave and I now live. You can see West End Lane, which is West Hampstead's main street, running north-south about a third of the way from the left side of the map. To the left (west) of West End Lane are lots of houses on streets like Pandora and Sumatra roads (where, yes, I also walk Olga). You can also see, at the upper right, a short segment of Finchley Road.

In between West End Lane and Finchley Road, and to the west of the Hampstead Cricket Ground, there was just open land with three large houses -- Canterbury House, Treherne House and West End Hall.

This is what that same area looks like today. The neighborhoods west of West End Lane haven't changed much, but between West End Lane and the cricket ground, a whole "new" neighborhood has been built. That's where Dave and I live. (I hasten to add that it's not really new -- it's probably 100 years old at this point!) Those three large houses are gone entirely.

It's also interesting to see how much has been built just north of the railroad tracks, such as the relatively modern housing estate between Lymington Road and Dresden Close where, yes, I walk Olga.

It's even more surprising to look at the whole map, because lots of the land beyond what I've shown here was empty in 1894. Nowadays it's just houses and houses and houses -- West Hampstead runs into Cricklewood which runs into Willesden Green and Dollis Hill. In the late Victorian and Edwardian years, London's growth mushroomed and much of the city's housing stock was built. We're all still living in it today!
Posted by Steve Reed at 6:48 AM