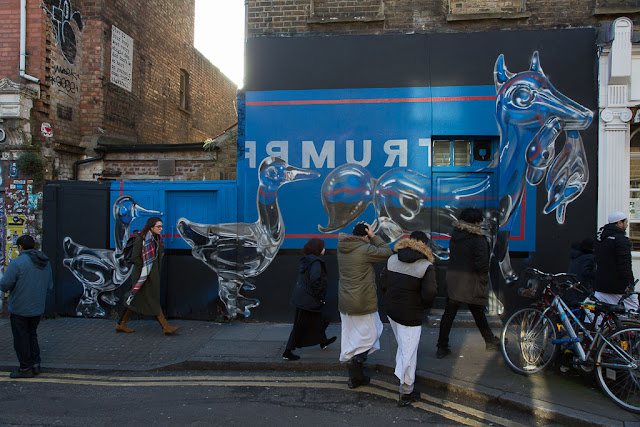 This mural in Shoreditch, by street artist Fanakapan, is called "Follow the Leader." I love the skillful way he rendered the glass fox and the gullible ducks. I have other shots showing the mural without people, but I prefer this one, with all the street activity. I'm not sure why there are two P's in "Trump," unless Fanakapan was trying to avoid a lawsuit over use of the name. Surely the fact that it's backwards is a message, though.

I'm still plugging away, popping my antibiotics and painkillers on regular 6- and 4-hour rotations. I keep thinking it's about time I turn the corner on this tooth problem, but it hasn't happened yet. At least I'm able to go to work and keep up my daily routines. Dave and I talked about how lucky I am to live now, when antibiotic therapy is an option. Imagine having this condition 200 years ago! I suppose it would not only be incredibly painful, but perhaps ultimately fatal.

In other news, I've been getting very peculiar e-mails from Match.com, of all places, trying to draw me back to the site with new potential matches. I haven't been active on Match for at least 11 years, if not longer, and why they've started contacting me now I'm not sure. But I can't unsubscribe from the e-mails without signing in to the site, which annoys me to death. I have no idea what my login is, and frankly, I don't want to sign in to Match.com at all. I have found my match, thank you very much! (And doesn't it seem a bit cynical on their part to assume I'm still single, 11 years later?!) They recently tried to hook me up with someone called "newbountyhunter," which, just based on the name itself, seems an unlikely match for me.

Dave and I finished "The Sopranos" on Monday night. I have to say the critics are right -- it was excellent television. And as I've said before, I am generally not a fan of mafia-related productions. I'm sorry to see it  come to an end. I can understand the furor over the ending, which at first seems ambiguous -- but I tend to agree with this guy that the more one ponders it, the less ambiguous it becomes.
Posted by Steve Reed at 6:01 AM