The Return of the Goldfinches 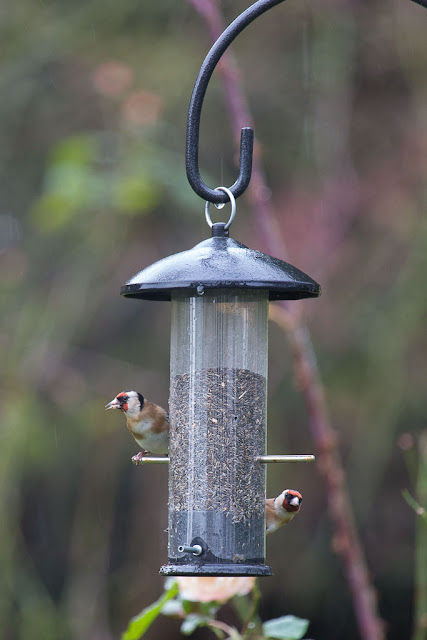 Dave and I were surprised to see at least four European goldfinches on our feeder yesterday morning. I wouldn't have thought it was the time of year to see them -- goldfinches supposedly migrate as far south as Spain during the winter -- but there they were, chowing down on our thistle seed. 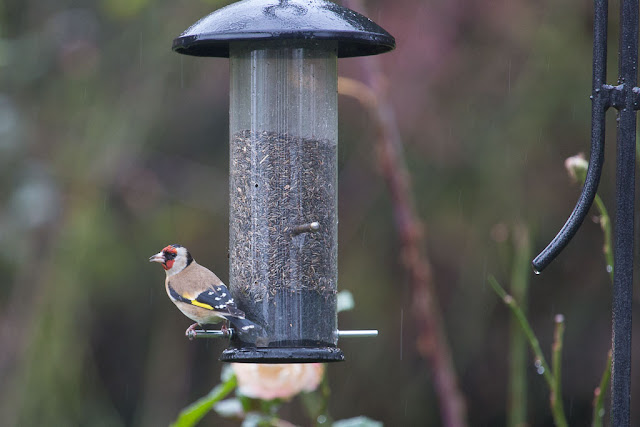 As you can probably tell from those pictures, it was pretty rainy yesterday. The forecast initially said it would rain only in the morning, so -- being stupidly trusting -- I took Olga for a walk in the afternoon. We got to Fortune Green and had enough time to play fetch with the Kong five or six times, and then went to the cemetery, where we got caught in a drizzly rain of steadily increasing intensity. Pretty soon Olga was huddled under a tree, looking at me imploringly -- and when the dog throws in the towel, I know it's time to go home.

Last night Dave and I went to see "All the Money in the World," which we liked. Christopher Plummer is so terrific as John Paul Getty that it's hard to imagine Kevin Spacey ever had the part. Afterwards we went to dinner in St. John's Wood -- we had a gift card to a restaurant there from one of Dave's students, but by the time we arrived the restaurant was closing. So we went somewhere else. We'll have to save the gift card for another day!
Posted by Steve Reed at 7:09 AM