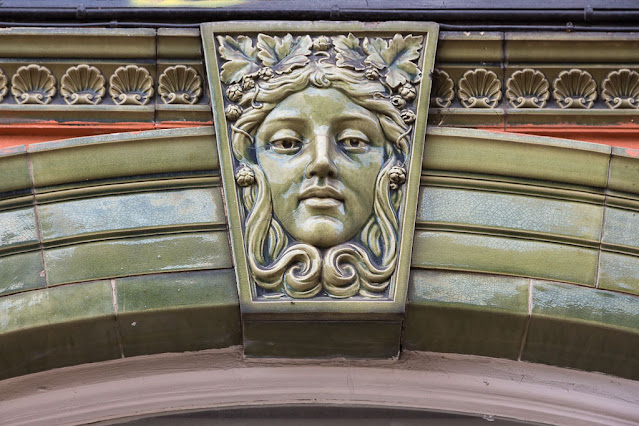 Remember Dionysus, whose portrait I posted a couple of weeks ago? Well, when I walked past the same pub in Cricklewood on Monday, I took a photo of his female counterpart. I have no idea who she could be -- when I look up goddesses of beer or alcohol I don't get any obvious answers -- but she's depicted with hops vines, if that's any indication. There's an Egyptian goddess of beer called Nephthys, a Sumerian goddess of beer called Ninkasi, and a Mesopotamian goddess of beer named Siris. I don't know of any specific equivalents in the Greek or Roman pantheons.

Then again, she may not be a goddess at all, and Dionysus may not, in fact, be Dionysus. Maybe they're just allegorical figures or generic faces. Who knows.

Yesterday was pretty low-key. After my marathon walk on Monday I rested my tired dogs and spent a lot of time reading. I finished "Hitty: Her First Hundred Years," which I really enjoyed. It was much better than I expected and I can see why it's a favorite for many people. Some of those older Newbery winners are so stale they're barely readable, but Hitty still pulls her weight. Next up: "Island of the Blue Dolphins," which was one of my personal favorites as a child.

Dave and I worked in the garden -- he cut down all the buddleias, and quite dramatically, too. I'm actually a little afraid for them, but they're tough as nails so I suspect they'll be fine. Pruning always makes me queasy. The last big cleanup job will be trimming the hydrangeas, and I'm going to leave that to Dave as well, because he's the hydrangea expert. 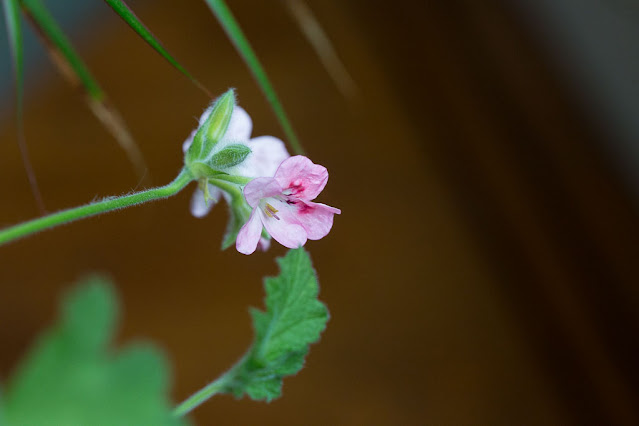 One of our geraniums, overwintering in the bedroom, has already started putting out flowers. It's obviously a bit confused.
Oh! I buried the lede again. We're having plumbing issues -- our bathtub and one of our toilets feed into an underground drain at the side of the house that seems to have become clogged. When we flush the toilet, water (to employ an obvious euphemism) comes up in the bathtub, and the shower is unusable. (We have a second toilet that still works fine, thank goodness, and the kitchen is unaffected.)

We called our management company and they put me on the defensive right away, warning us that we might be charged if they found evidence we've been flushing inappropriate stuff (latex gloves or wet wipes were their examples) down the toilet. I assured them we have not -- we never even buy wet wipes -- but I believe our upstairs neighbors also feed into the same drain, and God only knows what they might be doing.
Anyway, the management company sent a plumber yesterday, and he took the access cover off the drain and plunged away with a rod-like device, trying to release the clog. From the living room I could hear him grunting and sighing with the effort, and when I went out to ask him how it was going, he said, "Not good, mate." Turns out he was unable to solve the problem, so now someone is coming tomorrow to "jet" the drains clean. I have no idea what this involves. 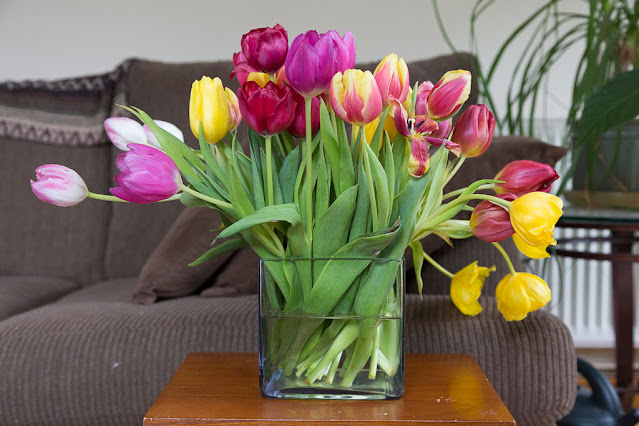 Here's the state of our tulip bouquet. As some of you promised, they are indeed flopping picturesquely. I never knew that tulips continue to grow in the vase, but here's the evidence!
Posted by Steve Reed at 7:11 AM