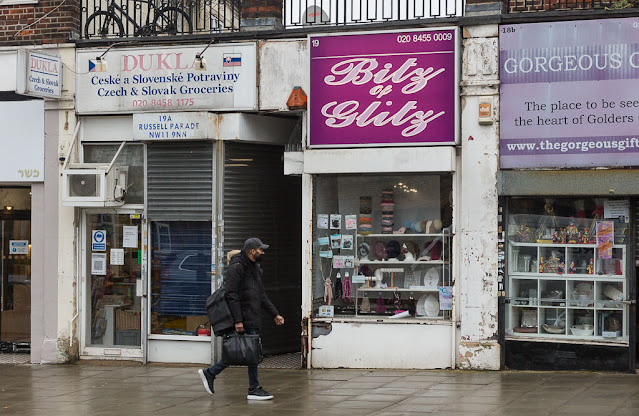 Yesterday I finally, finally took myself on a long-overdue photo walk. How long have I been moaning about not feeling motivated and being sick of my neighborhood blah blah blah? It's been a while! It felt so good to get out and see some new sights.

I didn't want to use public transport, given our lockdown, so I was somewhat constrained in my choice of destinations. I decided to walk to Sunny Hill Park, a pleasant-sounding place north of Hendon that I found on a map.

I started out in the morning and walked up to Golders Green, where I took some street shots of the interesting shops (above). 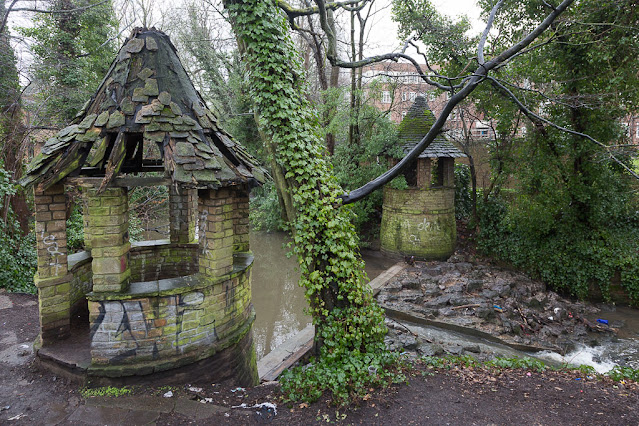 I revisited Brent Park, on Dollis Brook, to see if the deteriorating pavilions look any better in winter than they did last August. Answer: no. 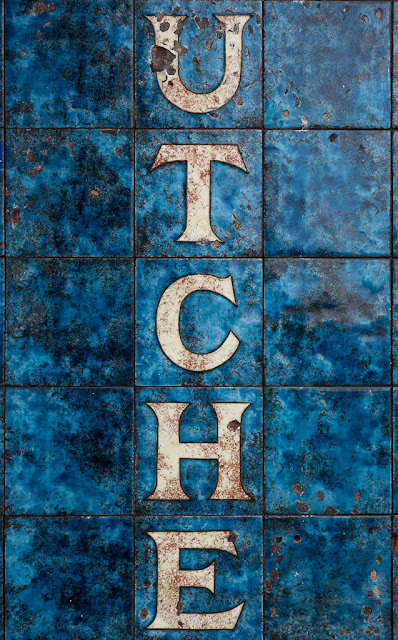 As I moved up into Hendon, I found an old tiled butcher's sign on a shopfront. There was no butcher nearby, so I assume this is an old sign -- which read Lavender Butcher -- from a bygone era. It doesn't look that old, but it's hard to tell with tile. 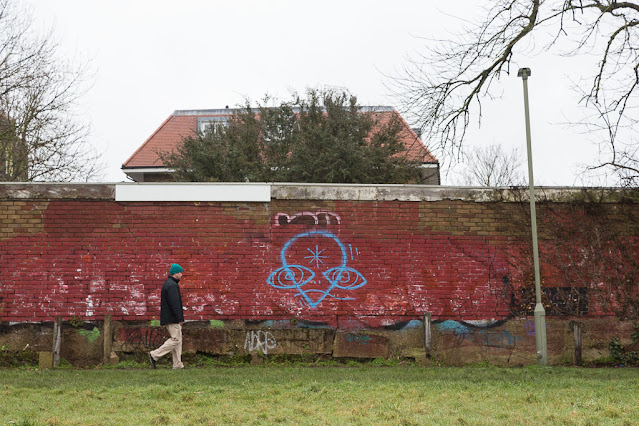 Sunny Hill Park, it turns out, is quite hilly. I guess I shouldn't be surprised. It's located in an area with cheerful street names like Sunny Gardens, Sunningfields Crescent and Greyhound Hill. It wasn't very sunny, which in England in February isn't surprising, but it had some intriguing graffiti. 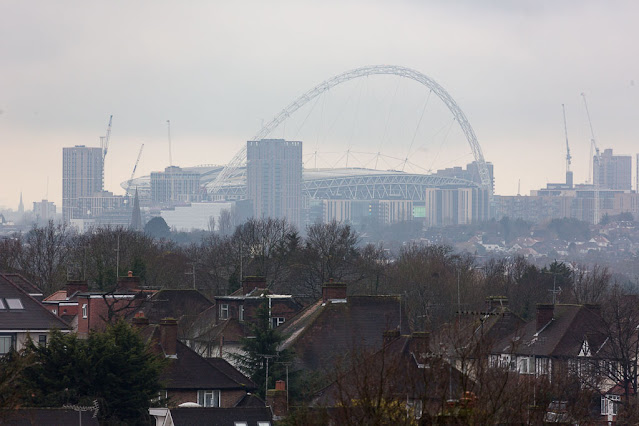 It also offered some impressive views. This is Wembley Stadium, 3.5 miles away as the crow flies. (People have complained about the architecture of Wembley, but it is the most immediately identifiable landmark on the skyline of Northwest London.) 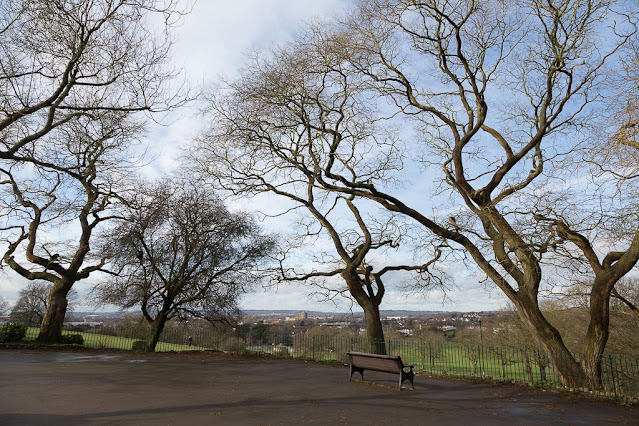 I decided to keep walking north, up into the Mill Hill area, seen here from a terrace in Sunny Hill Park. I got as far as the Arrandene Open Space, and I thought a quick walk through the woods might be fun before I retook to the city streets and headed home. But the paths were a sludge of mud and I turned around quickly. It was a day better suited to paved surfaces. 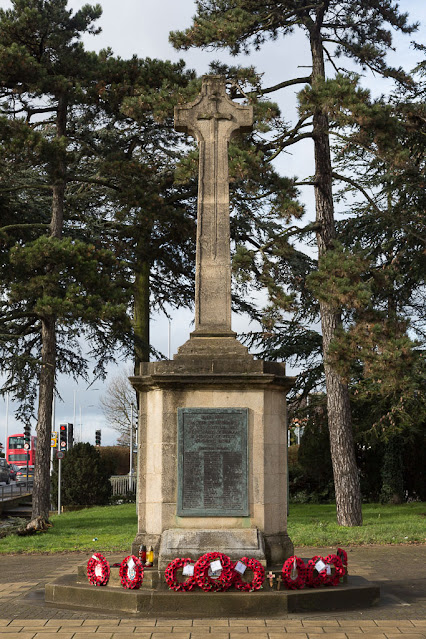 I walked back down through Hendon, where the monument to the local war dead sits on a traffic island in the middle of busy Watford Way. I walked south through Hendon Park and cut over to the Clitterhouse Playing Fields, where I sometimes walk Olga. The crocuses were blooming away, having just emerged from our recent winter snowfall. 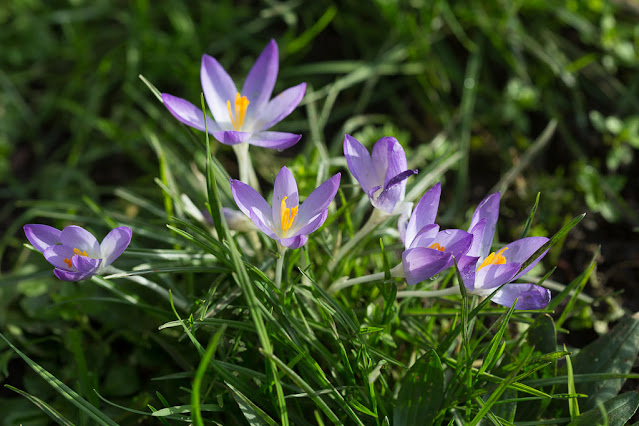 Altogether I walked 13 miles (or 26,000 steps according to my iPhone health app). So much time had passed since I'd had a long walk that I'd begun to doubt whether I could do it again, so I'm glad to see I can. I've still got all this week off work, so I'm already planning my next one!

Sad to see those little pavilions rotting away. Love the picture of the bare trees.
Briony

Terribly interesting shops, yep.
Just call the pavilions, follies.
I am unsure that I would want to get a piece of meat at Lavender Utche.
The thingie over Wimberly Stadium looks ok. I didn't know it was north west. Probably the only reason really to go north west.
The tree silhouette is great.
Thirteen miles, like 21 kilometres! I'm impressed at your fitness.

Thirteen miles? Well done Steve! I am glad to hear that you have shaken off some of that winter lethargy. In spite of the gloominess you returned with a fascinating bunch of photographs. Looking forward to your next walk already.

Wow, good for you. Thanks for the photos.

Such a wide variety of images from your walk. It is incredible to see the variations in styles and structures within just a few miles of each other.

The pavilions look very sad. Will nobody save them? And, we have to admit that we find graffiti of all kinds singularly depressing. Still, it is incredible how, even though you are in the middle of the city, there are wide open spaces to enjoy giving amazing views across the city skyline.

I need to check out Bitz of Glitz!
I love the old architecture--the pavilions--and the newish--Wembley. Very cool.

Great photos. 13 miles! What a walk! Good for you for being able to get yourself out. Brent Park is very sad to see. I wondered what the UTCHE sign was for. An uche is an amazingly cool person in urban slang. An ucha is a piggy bank slot (or ass crack) in Spain.

Thirteen miles! And I was proud of myself for walking three yesterday! You put me to shame. Thanks for taking us along and sharing your pictures. Excellent! I hope you slept well.

The photo of the trees in the Mill Hill Area is beautiful. I think it's wonderful that you can get out and do all this walking. Enjoy your early Spring. Hugs, Edna B.

Bitz of Glitz sounds like an interesting little shop. Thirteen miles is quite a long walk. I love that alien looking graffiti. I went to see Torvill & Dean at Wembley stadium back in 1985 on my very first trip to London. I love following along on your walks.

Thirteen miles! That's a really long walk. Must have felt great to get out there. Love the views, most especially the Sunny Park Hill view.

Great job on the long walk and the variety of interesting photos! That must have felt so good! I cannot wait for the snow and cold to lighten up here so I can get out and about for a walk again. I never go as far as you but...better than nothing (and I am much older!)

Outstanding!! And Your Lymphatic System Loves You For It!! Thanx For Sharing All The Photos As Well. Stay Motivated And Keep On Keeping On. Well Done Brother

the pavilions look better in their decay, green , mossy in a puddle. That is quite a walk, sir, i guess those legs of yours have memory. Wembley stadium does not look offensive to my eye- could just be your shot of it that makes it look appealing. Interesting walk- well done! Avoiding the crowd! Stay well, you guys!

I love walks, and joining someone else on a virtual one in a different city is fun. 13 miles, wow! I usually walk for 5 and then I'm ready for a bathroom. That's been an issue during the pandemic. Open bathrooms.

Whoa - that's a half marathon! (Right? Not being a runner I could be wrong). Anyway, great job getting out of the house. I actually like the pavilions looking all crumbly. But then I like to leave dead flowers in a vase on the mantle. Just call me Morticia!

13 MILES? Good Grief! But you did get some good views. The one of Wembley is impressive but I much prefer the next one with it's serenity.

and there are those poppy wreaths! that is a long walk. when you go on one of these it always makes me think of growing up on the beach. long walks on the beach are easy and people forget that as far as you walk, you have to walk just that far again to get back where you started.

The pavilions would be a good place for trolls to live--internet trolls.

I know! I wish someone would invest a little money in that park to clean it up and repair it. But I suppose Brent Council (or is it Barnet?) has other more pressing obligations.

Lavender Utche sounds like the name of a character in a novel.

It felt really good to get out there and move around!

You are welcome! More to come!

I don't mind some graffiti, if it's quirky or fun or has some artistic merit. The alien (I assume it's an alien?) gave me a smile.

I used to make books using Blurb, and they turned out well, but they were expensive and never sold. I haven't made one in about five years now.

I have a feeling the best thing about Bitz of Glitz is its name.

Ha! I definitely did NOT know that when I chose that bit of the sign to photograph! LOL

I did sleep well! I needed some exertion.

Isn't that a nice view? I wish I lived nearer that park -- I'd go there more often!

I've only been to Wembley once, to see Sigur Ros several years ago. All I remember is that it's big.

It DID feel good!

I don't usually go that far either. I just had a lot of pent-up walking energy to burn, I guess!

I always aim to keep my lymphatic system happy! LOL

They are very mossy, but that park is sadly neglected.

Indeed! I hope you're able to walk soon where you are! (Probably too cold and snowy now, I'm guessing?)

I've found that if I'm careful about how much I drink and when, I can avoid the bathroom situation. That IS a problem now with so many public places closed.

Yes, it IS a half-marathon. Which really drives home for me how FAR a marathon is! I would never do that to myself.

It was interesting to see some new sights!

Yes, the ubiquitous poppy wreaths. Beach walking is a challenge because of the sand -- it's tiring for the legs!

Ha! They do look like little troll-huts, but I think Internet trolls mostly live in basements.

Here's the latest one, just FYI:

Glad you're enjoying the photos, in any case. :)

There is a lot of construction going on in London! All those cranes! Those little pavilions are darling. I'd want to do something with them.