Hendon in the Heat 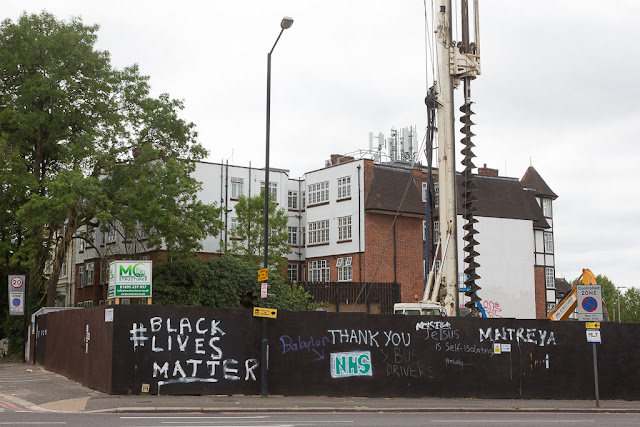 It was very warm yesterday. I couldn't even bring myself to eat much lunch -- I had some crackers and hummus and some leftover cold vegetables. Today it's supposed to hit 97º F (36º C).

Despite the heat, once again needing to get out of the house, I took a walk up to Hendon and Golders Green. I really need to take local walks more regularly, at least until work begins when I'll be walking to and from school every day. I haven't gained much weight during lockdown but I just feel less fit in general. So, yes, exercise! 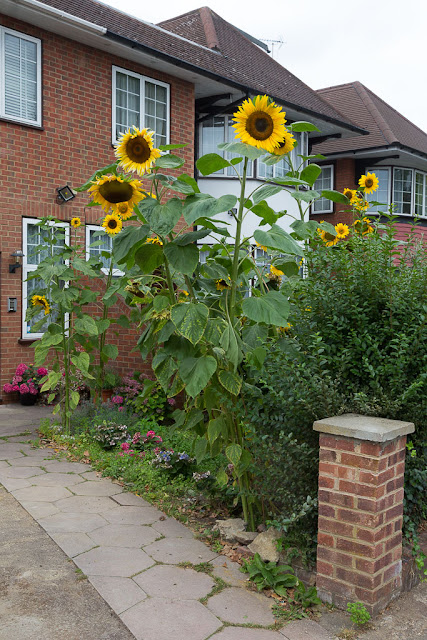 It's a good time of year for a walk through residential areas, where everyone's gardens are blooming -- some in a big way. I would love to grow sunflowers like this but I don't think any spot in our garden is sunny enough. 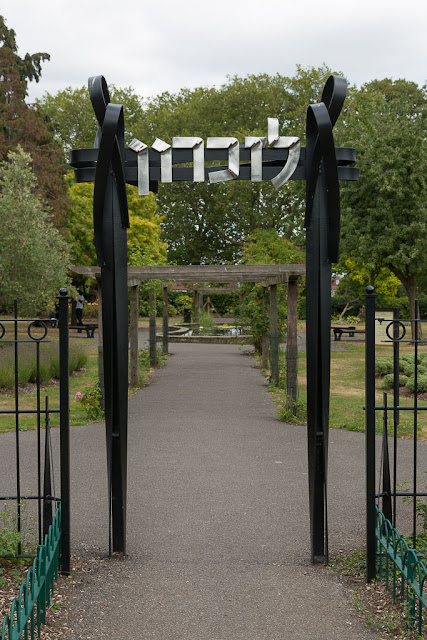 I walked through Hendon Park, where there is a garden in memory of persecuted people all over the world, and a gate specifically memorializing Holocaust victims. (Hendon and nearby Golders Green are historically very Jewish neighborhoods.) Can anyone who reads Hebrew tell me what it says?

While in the park, I stopped at the cafe for a coffee, and a guy behind the counter was wearing a black t-shirt depicting a figure kneeling in front of an American flag and the words, "It was never about the flag. Take a knee." I told him I liked his shirt, and he turned out to be from Queens! So we had a chat about living in New York. Funny.

I took my coffee to a park bench, where I sat until a runner jogged up behind me and asked if she could sit on the other end of the bench. That seemed a little too close for comfort but how could I say no? It's a public bench! So I said yes, and she sat and panted for a while, and I stayed only as long as was polite before I kept walking. 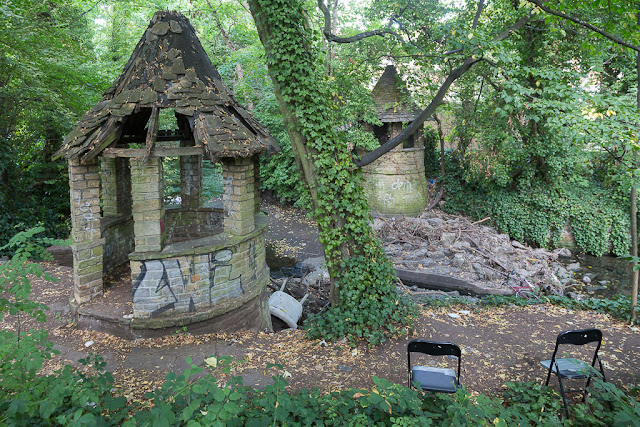 In a park along Dollis Brook I found these deteriorating pavilions overlooking a water-control structure. (A sluice? A weir?) The whole area is suffering from a sense of neglect. I'm sure Barnet council struggles with expenses, especially in these times of austerity, but I counted two bicycles, several chairs and numerous shopping carts in the river, and it seems like someone could get a crew in there to clean those up, at least. 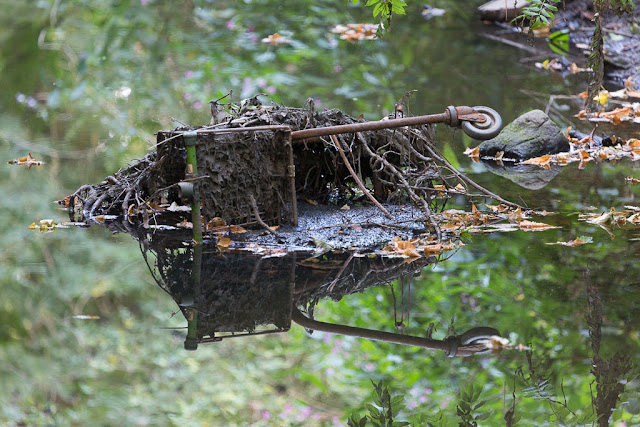 Sometimes the debris can be photographically interesting.

I wandered along, watching speckled wood butterflies and picking an occasional blackberry from the thousands on the bushes lining the path. 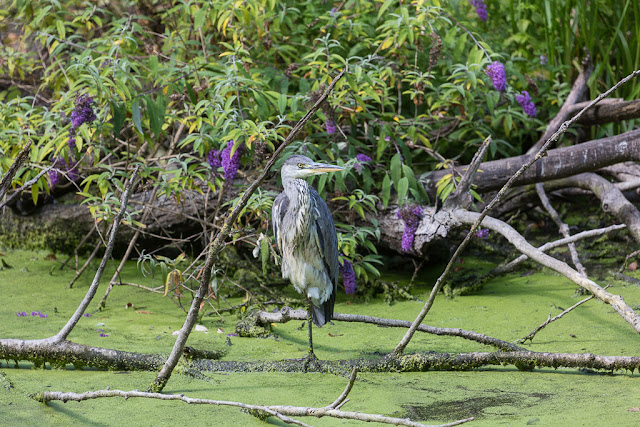 I walked the Capital Ring through the same area almost exactly a year ago. I found some interesting bird life in the ponds, and then walked through the fields where last year I found the funky camper (or as the English would say, caravan). The camper is gone now.

I came back home along Finchley Road through Golders Green, feeling much better for having had some exercise.

Some exercise and a fascinating walk

It's good to get out and about, even when the weather is knock-down hot.
Here in Australia we have a volunteer organisation called Clean Up Australia. Maybe you could start a small local clean up organisation. :)
The sunflowers are as high as an elephant's eye...
Alphie

It is good to get proper walking exercise. Will or won't you have to return to school? It must have been nice to come across a guy from Queens. You NYC people must feel a connection.

I would have told the coffee guy that I liked his shirt too. Glad you got to have a nice chat with another New Yorker.
Love the heron.
Someone just said recently on a blog (I think) that one almost never regrets taking a walk. It's so true. I am going to have a hard time getting back in shape when these ribs heal. Not looking forward to finding out how far I've backslid in the fitness department.

I've never had much luck growing the sunflowers. Mine would always fall over from their weight. I love the bird photo. It's too bad that such a beautiful area has been left to deteriorate so. Your reader is right, maybe a volunteer group could clean up the area. It would certainly benefit everyone. Enjoy your day, hugs, Edna B.

97 degrees in London is a bit too warm. It seems there is a heat wave in lots of places right now. Those old pavilions are interesting. I wonder what they were used for. That must have been fun to run into someone from New York.

nice walk. those sunflowers look great. I could probably have told you what the Hebrew says at one time but no longer. I wonder what those turret things were meant to be for. and a weir is a low water dam.

Great photos. It took me a moment to figure out the tipped over trolley--but love the perfection of the reflection. :) The Heron is a beauty, too.

Yes the walk in your area did provide some good photos and people.

That was a wonderful walk. Love these photos.
I've been thinking about growing sunflowers next year, if I could only remember in time to get the seeds or starts in. My memory these days ain't what it used to be.

Great Blue Herons fascinate me with how calm they are around humans. So beautiful. I was curious. Had no idea what that Hebrew lettering on the arch meant. I found it online: The arch was installed by Barnet Council in 2000. An accompanying plaque explains that the lettering is a Hebrew word, pronounced "Lezikaron", whose meaning refers to both remembering the past and looking forwards. The arch was designed and crafted by John Creed of Glasgow.

A good walk and some good photos. Those sunflowers are awesome. And that bird appears to be "doing a flamingo", i.e. standing on one leg with the other pulled up. Or does he have only one leg. I took the pic to a photo editing site to see it closer but couldn't tell.

That's really hot for you! We're still having above average temperatures and we are really tired of it. Going outside is just not possible after 9:00 in the morning. Neither of us are early risers, so the 7:00 rides have been difficult.

97 in London! Wow that's hot. And I bet you don't have air conditioning. I go on walks everyday too. Today I did a five miler. I don't take Murphy in the heat though..it's too much for him.

Well done on your walk in that heat. I can't do it - I have to wait until nearly dark and some of these humid days I can't even do it then.

I went online to look up how fast it takes to lose fitness levels, as I thought I'd read two weeks. The result that came up that astounded me was a University of Texas study that showed runners begin to lose their fitness at 47 to 72 hours -- and it takes them two days of retraining for every single day missed to get back to their previous level. Wow.

Alphie: I've often thought about joining one of the local clean-up groups for the parks near us (nearer than the one in this post). I should look into it.

Andrew: As of now, we're still returning to school in just a few weeks.

Ms Moon: In Florida, in the summer, I can imagine regretting taking a walk!

Edna: I've never tried giant sunflowers like those -- only the relatively small ones that grow from bird seed. (At least, ours were small!)

Sharon: I think they're just meant to beautify the park. It's a shame they've been allowed to deteriorate so badly.

Ellen: I suppose this could qualify as a weir, but it's got an opening in the middle -- a kind of channel.

Mary: I think sometimes a good photo requires the viewer to look at it more closely to figure out what's being depicted. So maybe that qualifies!

Robin: That's the tricky thing with seeds -- getting them going at the right time. I started my sweet peas too late this year and we're still waiting for blooms from some of them.

Padre: Glad you liked it! Olga has received many treats in your name. :)

Mitchell: Wow! Thanks for the research! The funny thing is, I saw that accompanying plaque, but clearly I didn't read it all the way through -- I only saw that the gate commemorated the Holocaust. Thanks for that!

Catalyst: I'm assuming he has one leg pulled up, though you can't see that leg at all. I think it's buried in his feathers.

Allison: Yeah, this time of year can be a bit challenging! Hold on for just another month or two!

Michael: Yep, no a/c here. Fortunately the houses are very well ventilated with a lot of windows.

Jenny-O: That seems like it must be a very incremental loss. When I was running and working out, I used to find that I could skip a week or two (if I traveled, for example) without any significant changes.