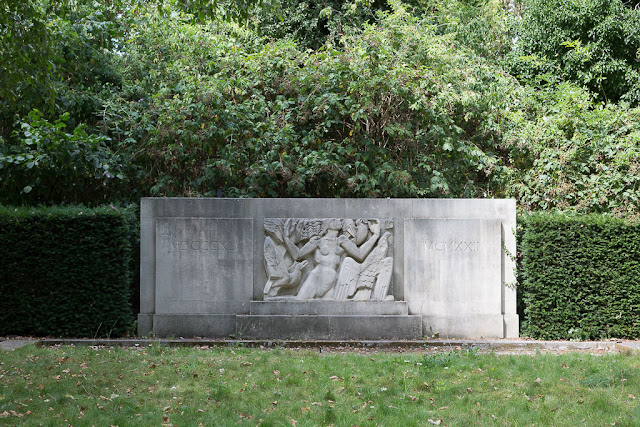 When I was in Hyde Park on Sunday I came across this monument, which I swear I have never seen before, even though I've wandered through Hyde Park at least a hundred times. Funny how something like this could go unnoticed by me for so long. It's a bird sanctuary with a bench and a small fenced lawn, surrounded by trees and set aside in the name of W. H. Hudson, a naturalist and ornithologist who died in 1922. He was also the author of the novel "Green Mansions," which I've heard of but haven't read.
Yesterday morning I was cleaning the house and I had the front windows open. I heard someone yelling in the street and peered out to see what was going on. An older guy was wandering up and down yelling "Grinding! Knife sharpening!" He was trailing a little dolly with a bag and some equipment.
Now, this seems very Mary Poppins to me -- an itinerant knife grinder -- and coincidentally, Dave and I had some knives that we'd been complaining about because they were so dull. So I went out and asked him how much it would cost to sharpen them up. We settled on a (slightly too expensive) price and I plugged in his grinding wheel. He set up shop on top of one of our recycling bins and went to work: 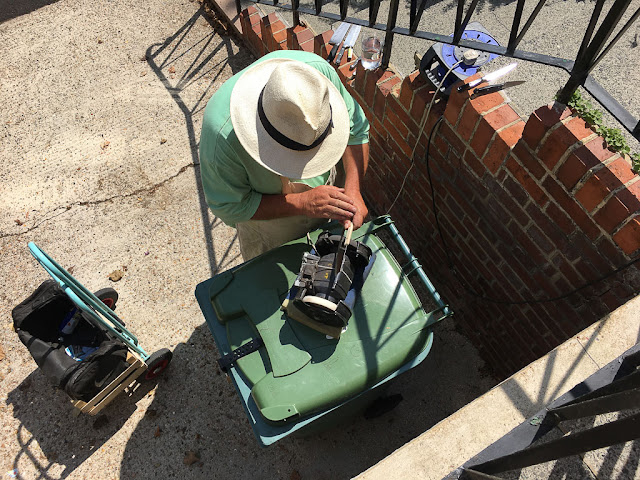 One of my neighbors brought out some knives too, and I overheard him negotiate a better deal. Live and learn!
I could barely understand the grinder, he had such a thick East London accent. He asked where I was originally from, and told me he had relatives who'd moved to Florida. (Doesn't everyone?) Then he asked for a beer or a glass of wine. (It was 11 a.m.) I said I didn't have either, and he said, "Are you one of those people?" I assured him I drank but just didn't have anything handy, and gave him water instead.
When he finished, he scraped each knife blade across the palm of his hand, like a razor across a strop. I'm not sure what this was supposed to show me, but I accepted his judgment that they were adequately sharp. After I paid him he sat on our steps and had a cigarette, and then went on his way. We haven't used the knives yet but I'll let you know.
My allergies have been acting up like crazy this year. I don't know what's going on. I've even had to resort to occasional medication, which is pretty rare for me. There's a brand of allergy medicine here called Piriteze that we've been using (turns out it's the same as Zyrtec), and that's been pretty effective and doesn't seem to make me sleepy.
On her blog, Dana mentioned a recent Internet meme that asks people how old they were before they had a black teacher. In her case it was middle school. I realized, can you believe it, that I didn't have a black teacher until college? This shocks me now that I think about it. I can't even remember a black substitute. We lived in an overwhelmingly white suburb -- there were only about four black kids in my entire high school, and my yearbooks depict a sea of white faces -- but still. You'd think the school system would have insisted on more diversity in hiring.
Posted by Steve Reed at 7:45 AM