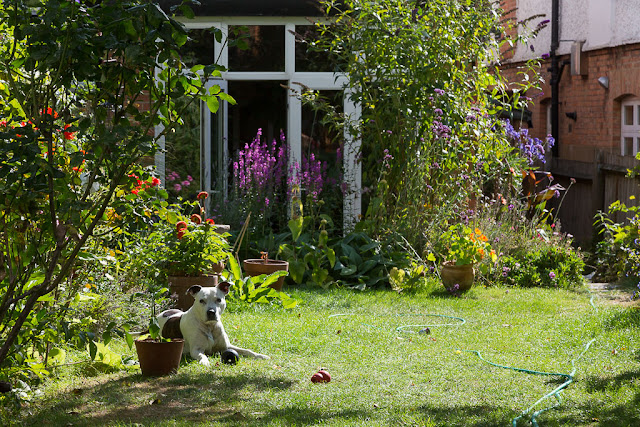 There's Olga, enjoying the late-summer garden with its oranges and purples. The color palette of flowers definitely seems to shift with the seasons, this time of year producing warmer colors than the pastels of spring. In the morning Olga was sunbathing as usual, but as the heat escalated she spent most of the day in the shade.

I've just been wrestling with New Blogger. I have honestly tried to use it, but I can't get my posts to format the way they used to, with centered photos and correct spacing between paragraphs. (The posts look OK on a computer screen but terrible on a phone.) Besides, as far as I can tell, there is no advantage whatsoever to the new system. So why put myself through this change? I'm going back to Legacy for as long as it exists.

We had a quiet day around here yesterday. A trip to the grocery store, some reading in the garden. I finished Stephanie Danler's book "Stray," her memoir about growing up with substance-abusing parents in Southern California and Colorado. She seems to make some bad choices, but she also writes honestly about them. At one point she said she has a sensitive stomach and isn't "physically built for drugs or any binge behavior," but then details the ways pounding a beer, doing a shot, smoking a cigarette or taking acid, opioids or ecstasy affect her. I thought, well, it's not for lack of trying.

Oh! My t-shirt arrived -- the one I ordered from the states back on June 21. For the longest time the tracking showed that Royal Mail unsuccessfully attempted to deliver it on July 23, and would notify me -- and I got no notification at all. Then suddenly yesterday it popped through the mail slot -- no customs fees, nothing. Who knows where it's been for the past two weeks. At least it's here now. (Meanwhile, Dave's birthday present from his parents, mailed in May, has never arrived. We think it may be gone for good.)

I also stepped into another bureaucratic morass by trying to order my annual credit reports from the USA. Turns out I can't do that if I live overseas, so I had them sent to my stepmother's house in Florida. I haven't seen my credit reports in years but I've lately had some indications that my identity may have been used by someone else to secure a loan -- a car loan, specifically, in Massachusetts. I hope I'm wrong, because that will probably be exhausting to try to clear up, but I guess we'll see. 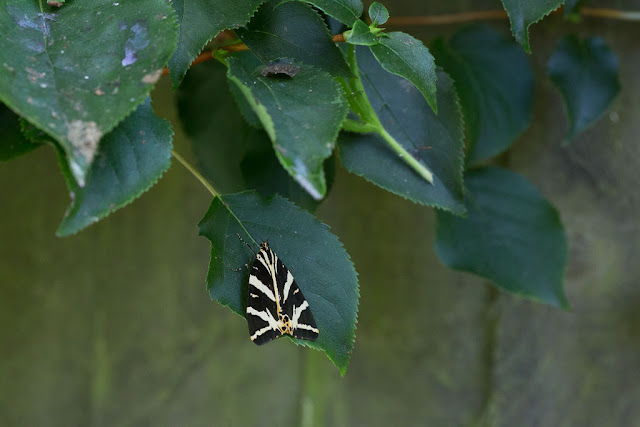 This Jersey tiger moth fluttered through the back garden yesterday, flashing its bright orange underwings as it flew. I tried to make a video of it in flight, to show you how colorful it is, but I couldn't get the moth to cooperate! It seemed intent on resting on that leaf. 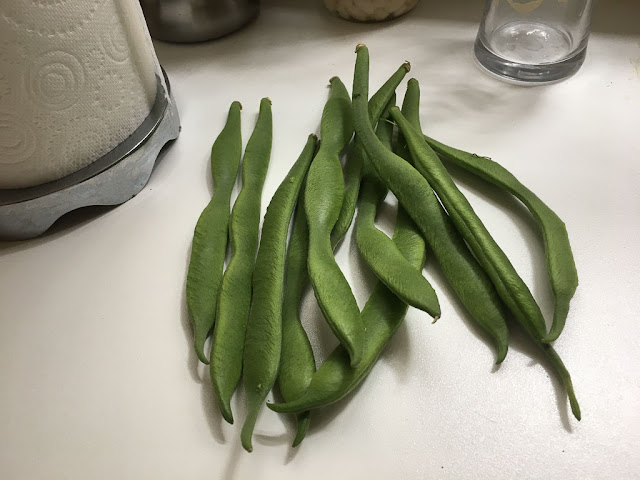 I never mentioned it, but Mrs. Kravitz gave us a bean vine several weeks ago, which Dave has patiently nurtured and trained up some twine at the side of the house. It's started to give us beans! Mrs. K couldn't tell us exactly what kind of beans they are, but she says she eats them pod and all. Dave, however, thinks they're broad beans, like limas, that should be shelled before eating -- the pods have a slightly furry texture. (We ate the ones above complete with pods, and they were fine.) We're also not exactly sure when to pick them. In short, we have no idea what we're doing.
Posted by Steve Reed at 7:10 AM