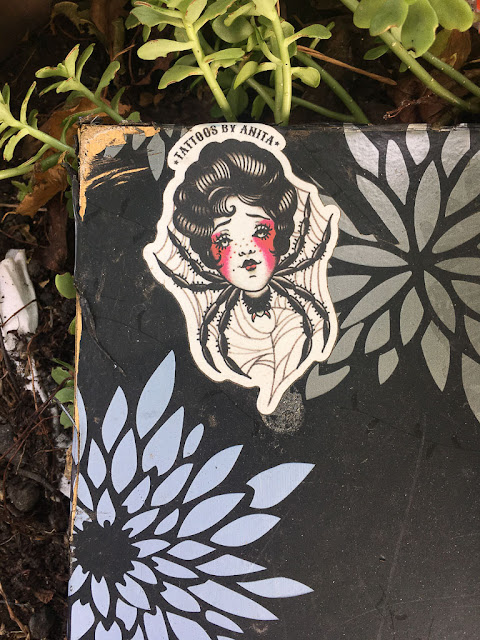 It's been blowing like crazy all night. Somehow all the plants have remained standing, so I don't have to run out and rescue the avocado or the canna lilies again. Apparently, we've had two named storms within the past week -- Ellen and Francis. It's very unusual to have such severe weather in August. I thought we were just having wind and rain!

Anyway, I have to do some reading for a meeting this morning at work. (Which of course I haven't done yet.) So let me catch you up on some accumulated iPhone photos!

First, I found this sticker on a discarded piece of paneling on the high street. It doesn't really make me want to get one of Anita's tattoos. 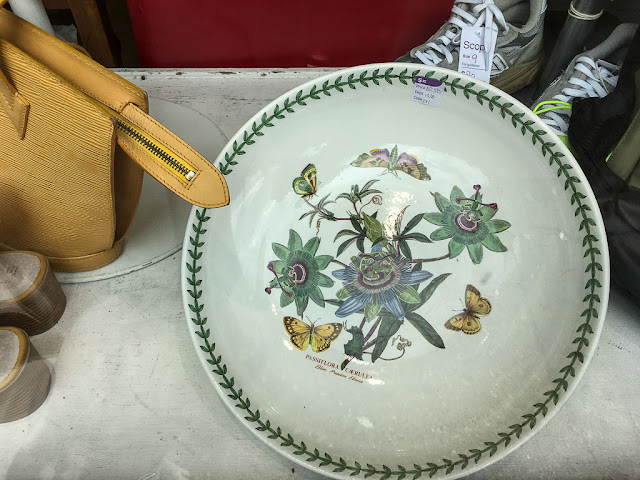 This bowl was in the window of one of our local charity shops. I need another bowl like I need a hole in the head, but I like the passionflower motif. 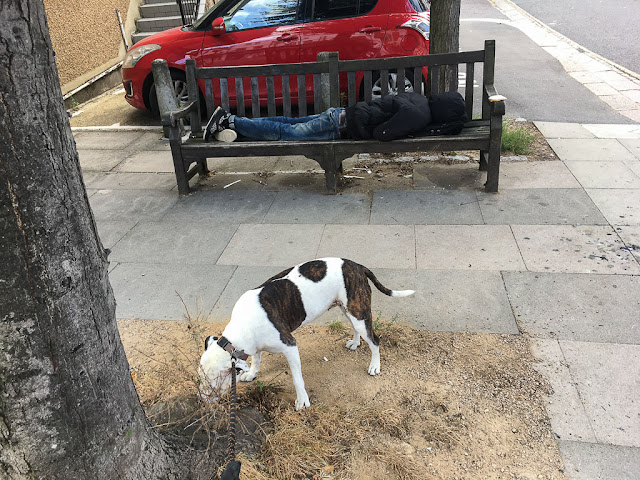 Olga and I pass this bench every day on our dog walks. This might be the first time I've seen someone sleeping on it! Olga was unfazed. 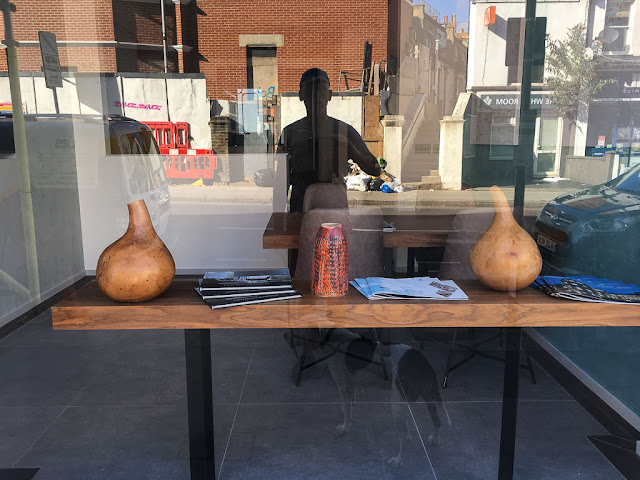 Here's another self-portrait in shop window, this one a silhouette with that cool vase I showed you a few weeks ago. 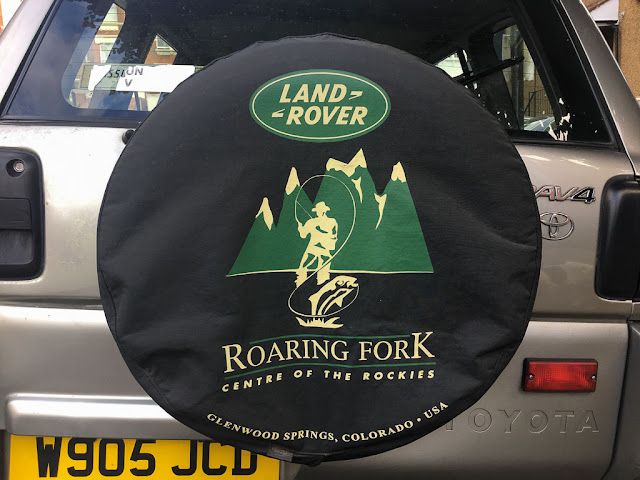 I was surprised to see this wheel cover on a Toyota (not a Land Rover) on our street. Colorado?! It's a British model Toyota with the steering wheel on the right, so who knows. I guess someone is well-traveled and yearning to breathe free in the wide-open spaces. As long as they stay on the correct side of the road. 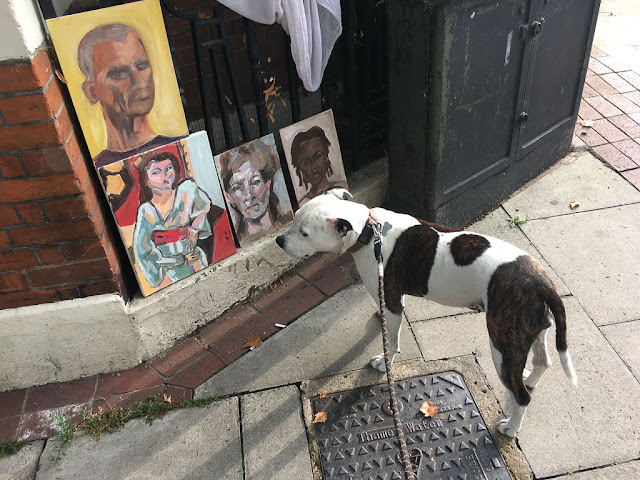 Olga and I found some very bad amateur art being given away (I guess) on the corner. We didn't take any of it. Olga, again, was unimpressed. 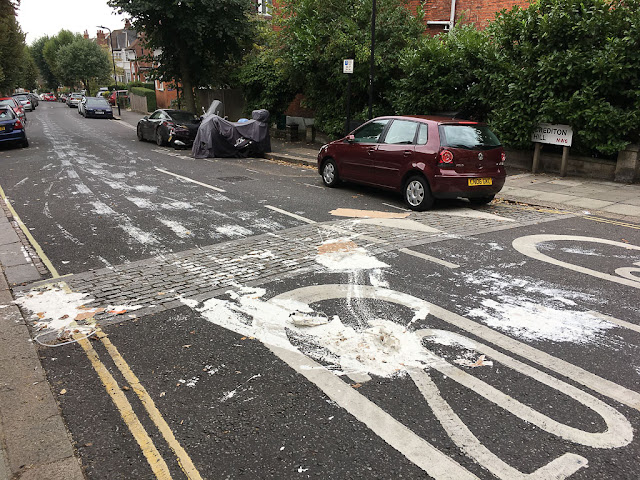 Someone dropped some cans of paint on our street, with far-reaching consequences. Argh! 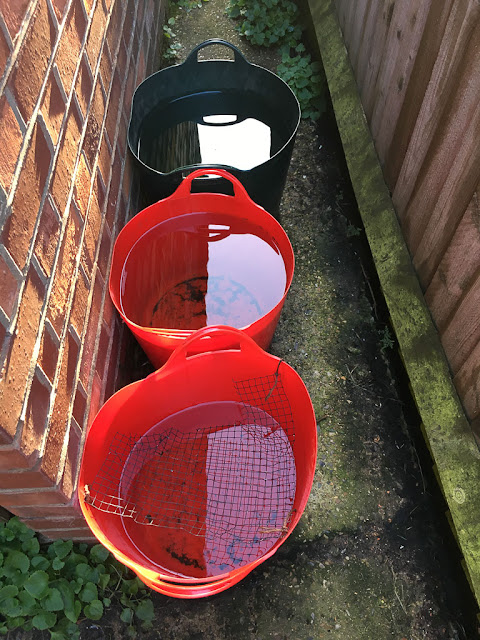 We collected lots of rainwater in our makeshift rain barrels during storm Ellen! It's good for the plants. 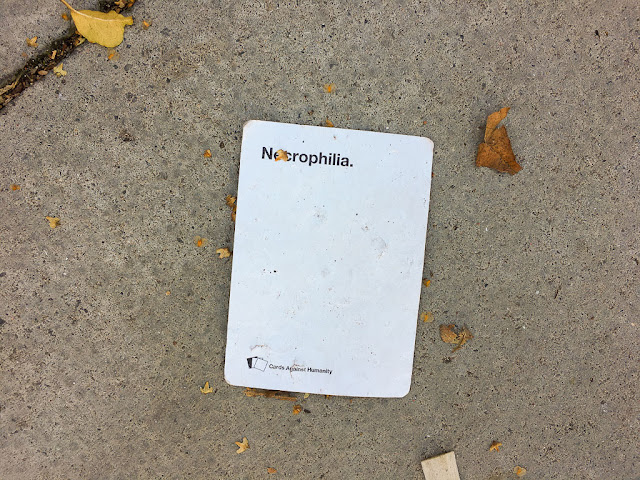 A rather surprising word to come across on the pavement. This is from a game called "Cards Against Humanity," which I have never played, but I've heard is pretty fun. Certainly looks intriguing, in a repulsive kind of way. 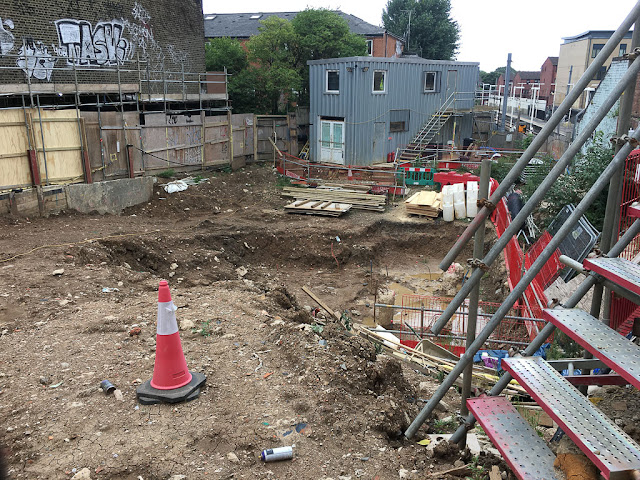 This is the site of an old pub on Finchley Road that has been demolished. (I don't think I even have a photo of it -- it wasn't a very auspicious-looking place.) I have no idea what's going in here, next to the Finchley Road and Frognal Overground station. Right now it's just a big pit. I took this through the security fence around the edges. 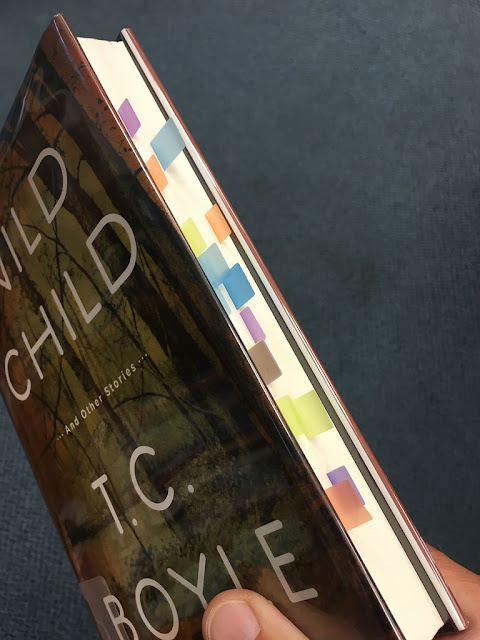 And finally, can I make a rule (or at least a sincere plea) that people should remove all their little sticky page-marking tabs before they return their library books? Because otherwise, guess who gets that job?
Posted by Steve Reed at 6:33 AM