Yet Another Mud Bath 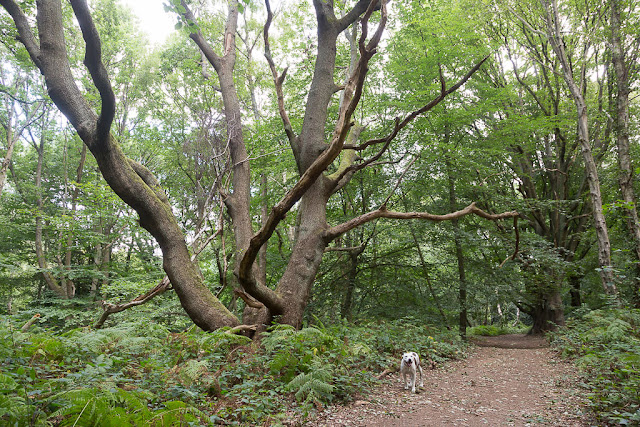 Olga and I were back on the Heath yesterday, where the chestnuts are taking on brownish tinges and it was a cool 66º F (18.9º C) at midday. More indications that we are indeed moving toward fall. 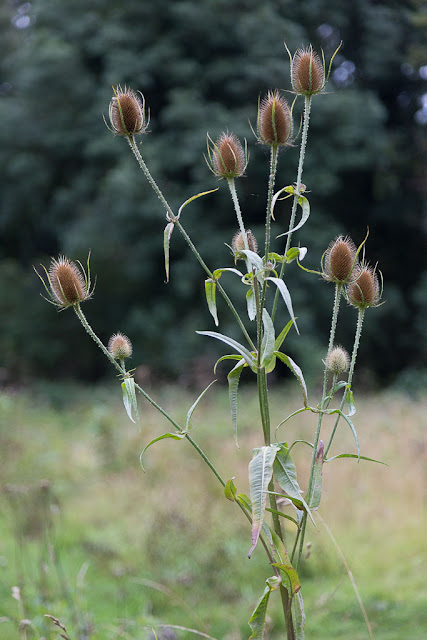 I found this striking teasel growing on Sandy Heath. We have a huge teasel in our back garden, but it doesn't look that great -- the wind bent it over at some point and all the teasel heads grew sideways. Plus they're white teasels, which I find inferior to the purple ones. I've never even photographed it. This plant is a much better example. (We're keeping ours for the goldfinches, though. They love the seeds.)

We have about ten smaller ones coming up here and there in the garden, so next year we should have quite a teasel show. 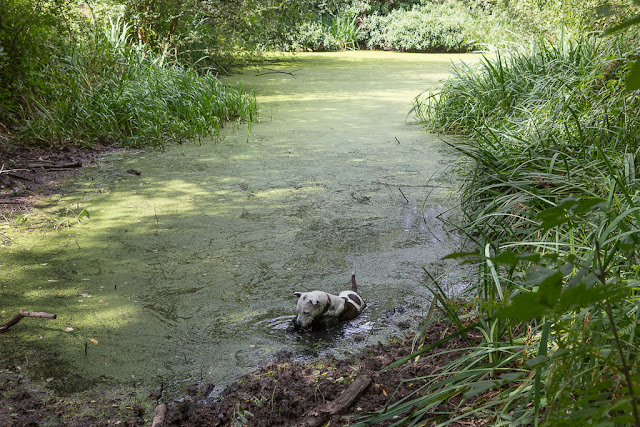 Anyway, back to our walk. Of course, there was the inevitable mud bath... 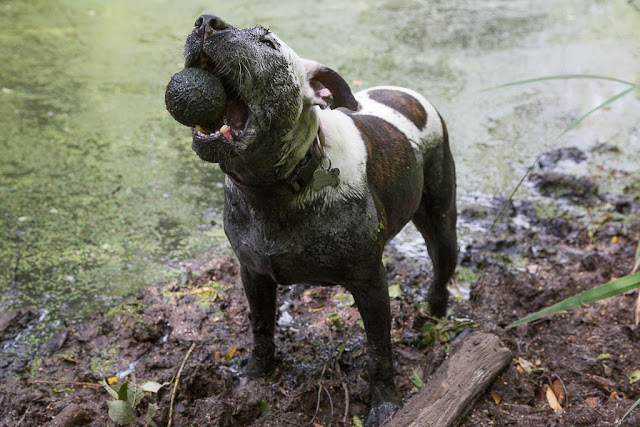 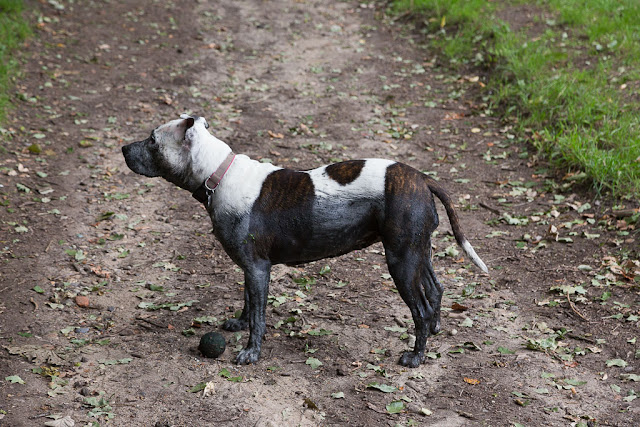 "She looks like a new breed of dog!" one woman exclaimed afterwards, and indeed, several people took a long second look trying to figure out whether that blue-black mud was her natural coloring.

"She's beautiful!" said another passerby to me, as she simultaneously held a conversation on her cell phone. I felt like saying, "Are you freakin' kidding me?" But then again, she was distracted.
Before any of you worry about her health, let me just reassure you that Olga doesn't suffer at all from these dips in the muddy ponds. She's a dog. She's made for this kind of stuff. We just give her a good bath when she gets home and she never shows any ill effects.

Last night we finished the second season of Netflix's "Dear John," about Betty Broderick, a California woman who broke into her ex-husband's home and shot him and his new wife dead back in the 1980's. I thought Christian Slater and Amanda Peet did a great job in the main roles, and overall I found the show very compelling. Dave wasn't a fan at first but he came around after a few episodes.

And today, back to work for both of us!
Posted by Steve Reed at 6:31 AM

Some dogs prefer to stay clean, but clearly Olga is among the many who don't.

I don't even have it in my to WRITE a "Dear John" letter. Forget taking a gun to anyone. Still, thanks for the recommendation. It's not something I'd ordinarily watch.

Whilst I like dogs I tend to go the way of least resistance (tell our very own not so gentle John that and he'll snort). Cats are easy. They don't need baths. In fact, one of my long ago cats (curiosity kills) checked out a bath I was running for myself. Oh, the joy of all that foam, moving, something to chase from the side lines (the rim of the bath tub). I left the room briefly, returned just in time to rescue her (she'd slipped and fallen in). Her being indignant palatable. The next two hours she ignored me. She licked, licked, licked her fur and then some. Sometimes I wish all my life were as self cleansing.

Olga is too funny -- she looks so pleased with herself after her dip in the mud. I hope she likes her follow-up bath as much.

I see Olga's wearing a black jumpsuit with a matching mask. :) Though I sure wouldn't want to put that "fabric" under a microscope.

Olga is a darling mess. That's all there is to it. She just seems so happy all the time. I love the picture of her under the tree. A witchy woods.

Dogs ARE built for that, our springer spent all day in the sound chasing sea gulls, swimming and woofing, When we moved to town, she become so unhappy that she died, Olga must have mud dips, essential! Teasels are weeds here, scooped up , hung on the fence, as an example for the others to see.No mercy.
Olga steals the internet blogworld again, adorable pooch!

I'm going to have to check to see if we have teasels here.

Olga is the cutest, muddiest dog I've ever seen. If we crossed paths with you I would tell her how adorable she is. Now I wonder if she would let me pet her.
Teasel grows like crazy around here, always the purple flower. They're very pretty, but also an invasive species.
Enjoy the fall weather!

Olga looks like a seal in that picture of her with the ball in her mouth. my dog does not like water at all. she tolerates baths barely.

I just finished a book that is set in London and it mentioned several of the places you write about like Hampstead Heath. and because you write about them and show pictures I knew the places instead of them just being names to skim over. so that was fun.

We humans are built for playing in the mud too (tromping around the Thames foreshore?), but somewhere along the line learned we shouldn't get our clothes dirty.

Have you considered putting together a calendar from your photos? Olga would make a great model through the seasons.

Oh my, that is a lot of mud on Olga. She probably loved every minute of it. Those pictures are amazing.

God Bless that Olga! She just loves those mud baths. My little dog doesn't really care for the water. He only tolerates his baths. I really love that tree in the first photo. It's old and very interesting. Enjoy your day back at work, hugs, Edna B.

Olga is a riot. And she would probably give me an anxiety attack... but I'd laugh my way into it. Will see if Dear John is available on Netflix here. Their house was a few minutes walk from us when we lived at our first place in San Diego. So strange to walk by there knowing the story. It was an oddly "Tara-like" house for the area, but there were a few of those on the street. (And I have no idea why I had to tell you that.)

Olga is Joy Personified - I always love to see her as filthy as possible. Ha! And I LOVE THAT TREE. It's by far my favorite scene that you shoot. Happy sigh...

Olga really enjoyed herself there!
Have a look closely at those teasels...do the spikes have a little hook at the end?
If so, they were used after fulling cloth, to raise the nap, which was then shorn with big shears.

Do you have to take Olga through the house for the bath when she's done wallowing, or is there an outdoor dog washing station. She looks so happy in the mud.

I've never met a dog that didn't love mud. They don't worry about tracking it into the house! Good luck now that both of you are back to work. I went in this morning to install updates on my computer. The whole thing is surreal in a way.