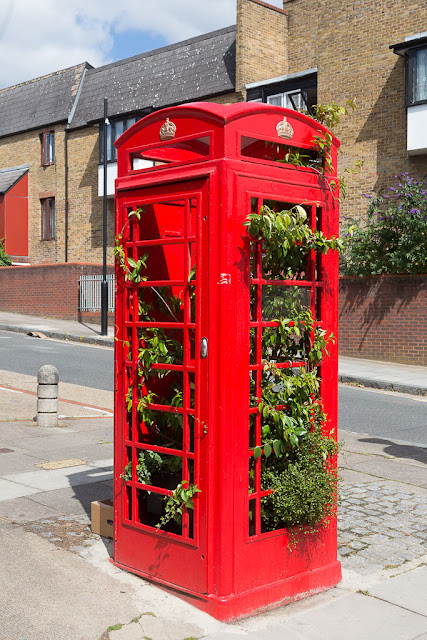 Speaking of old telephone boxes, as we were yesterday, here's an example of one that's been creatively repurposed. I found it in Archway, a neighborhood in North London, where I believe it was rehabilitated just last year. But I've photographed similar planters in Archway in years past, and apparently the old phone boxes were first turned into green sculptures there back in 2012. It's a great idea, isn't it? Provided someone keeps those plants watered.

(By the way, I know those of you reading this blog on a phone see distortion in vertical photos, like the one above. It has something to do with New Blogger. I have no idea why it happens, but I've reported it. If you click on the photo you should see it normally. It doesn't seem to be a problem on computers.)

I think we got a bit more rain overnight -- everything is damp out there this morning -- but so far we've been spared the downpours that have wreaked havoc and flooded streets in other parts of England and Scotland. Yesterday was cloudy but dry. Dave, who was at school for a planning meeting all day yesterday, said it rained there, and that's in St. John's Wood, just a 25-minute walk away. But we didn't see a drop here -- and believe me, I was watching for it.
I spent most of the day reading and doing stuff around the house -- deadheading the dahlias, putting away the rubbish bins after our trash collection. Nothing very exciting. 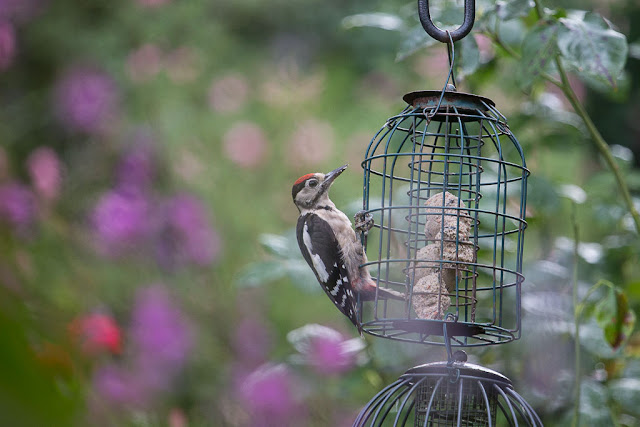 The woodpecker in our back garden finally cooperated and allowed me to take its picture, rather than hiding on the far side of the feeder while it ate.

I picked some more blackberries yesterday, but the harvest is coming to an end. Most of the ones I haven't already picked have gone mushy or dropped. There are still some green or red ones so we may have a few more berries before it's all over, but soon I'll be back to buying fruit to put on my morning cereal.
Posted by Steve Reed at 8:16 AM