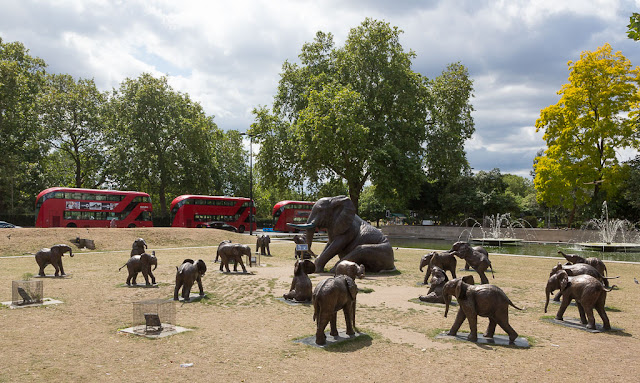 When I was in Hyde Park on Sunday I also discovered this artwork, by artists Gillie and Marc. It's called "The Orphans," and it depicts a mother elephant with 20 orphaned calves running toward her. It's meant to highlight the fact that 55 elephants are killed every day by ivory poachers and in conflicts, leaving behind calves who are often too young to care for themselves.
"Each sculptured baby symbolizes a real orphaned elephant in the care of the Sheldrick Wildlife Trust that the artists sketched on a trip to Kenya," according to the information board with the sculpture. 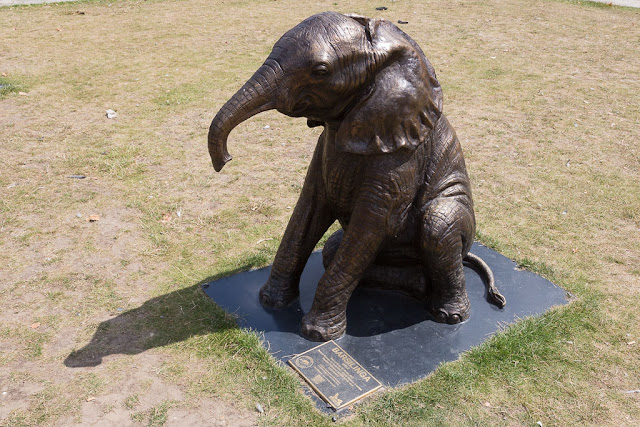 For example, here's little Barsilinga, a male elephant rescued when he was just two weeks old after his mother was shot by poachers.
"The Orphans" is part of Gillie and Marc's broader project called "Love the Last" that uses public art to raise awareness and money for the preservation of endangered wildlife. 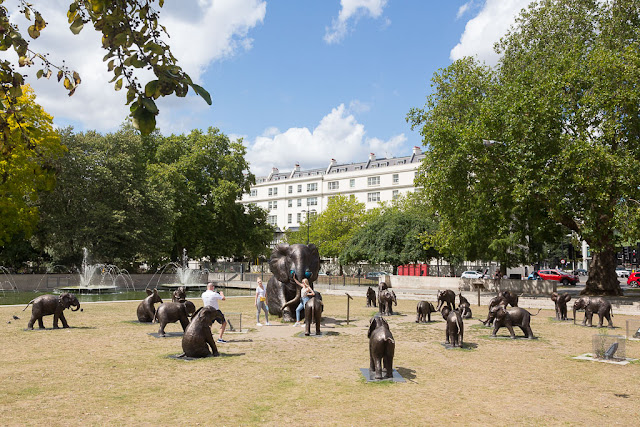 On a happier note, I walked to Homebase yesterday morning, hoping to buy some coleus for the garden. Unfortunately they didn't have any -- in fact they didn't have much in general. I think their garden department must be clearing the summer stock and preparing for fall. I found a tray of gazanias and bought those instead, then came home and planted them after clearing some of our spent annuals.
I also got out our hedge trimmer and fought back "the monster," the neighbor's climbing rose, with its tendrils that arch over our patio. The same neighbor came to our door and said her gardeners are going to cut limbs on our hazel and philadelphus that hang over her property -- apparently her garden is suffering for lack of light. They're supposed to do that work today. I don't mind what she cuts as long as it's on her side of the fence, but it was nice of her to let us know.
I used one of our newly-sharpened knives to cut a tomato at lunch and I'm happy to report it's much better than it was. I'm not sure it would chop wood or cut an aluminum can like a Ginsu knife, but I suppose I don't really need to do that anyway.
Posted by Steve Reed at 8:01 AM

I am pleased to hear that your money wasn't wasted with the knife grinder fellow, but do you not have a sharpener in the house? I regularly do mine on a little gadget bought at very low cost. I also have a " Joseph" cutting board with an integral sharpener.
The baby elephants made me feel very sad.

Sad about the elephants and sad about many poached species.

We bought an electric knife sharpner for not too much money. It works well but I think the quality of our knives is poor as they don't stay sharp for long.

I feel like weeping for the elephants. Why? Why? Why?

Glad you got your money's worth from the crooked knife sharpener! That elephant sculpture collection is powerful.

Oh those elephant sculptures are gorgeous and heartbreaking. Elephants are such beautiful animals. What is wrong with humans? I'm glad your knife is working better. I should all of mine sharpened too. You enjoy your day, hugs, Edna B.

Would there be poachers if there wasn’t money in poaching? It’s never just one thing.
I hope that the art does raise awareness AND money. As far as I know there are no different elephant species waiting in the wings.
Sharp knives are a cook’s delight.

That art work is wonderful with a very sad story behind it. I've seen documentaries about how difficult it is the care for the young elephants when they've lost their mother. It breaks your heart.

That elephant art is so beautiful and touching and heartbreaking. I could go into an expletive-laced tirade about what I think of elephant poachers, but I know you know.
Excellent news about the sharpened knives. You could test them out on some elephant poachers, if you get a chance.

That elephant sculpture is stunning and moving. I hope it is a permanent installation. Thank you so much for posting the photo!

I have used a manual knife sharpener by Chef's Choice for many years now and it works great. It sharpens straight and serrated edges. One of those kitchen things that is useful, inexpensive and long-lasting.

I am so flawed- I relish schadenfreude when a story pops up about a poacher being eaten alive by a wild thing. The elephants are endearing and stunning and the message made clear! Mother's are Mothers, Our raccoons are now traveling with a mother who adopted them, Big Mama must have been injured or died. One baby is sad and hides her head in her paws when she is not on the move.

The sculpture is heartbreaking. I can't even find the words to say what I feel about the poaching of animals that involves leaving babies without mothers. Humans can be terribly cruel.

That group of the elephants is sad, even sadder than the human female throwing her chest out for the photographer in the final shot.

Why is there even a market for poached ivory? Who wants that stuff? It represents murder and sadness. Like Linda Sue, I cheer for the animal who eats a poacher. More power to them.

Adorable baby elephant sculptures. Bastard poachers. But wait, aren't the real bastards the end recipients? I won't elaborate further.
The gazanias will be a worthwhile end of summer purchase.
Alphie

Those elephant sculptures are amazing! Glad the knifes are sharper now! It was worth it!!

The elephant installation is so poignant. It makes its point powerfully.

Frances: We don't have a sharpener! We should probably get one.

Andrew: We have one really good knife which we did NOT give to the grinder man. The rest are garden-variety knives so he couldn't do much damage to them. We'll see how long the sharpness lasts!

YP: I agree. Animal poaching is something I simply do not understand. But then, I'm not starving or having trouble feeding a family.

Mitchell: It IS powerful, isn't it? It made me cry.

Edna: I agree. I wish people weren't so short-sighted.

Ellen: We do have some of those. I didn't give the guy any of our serrated knives, but I'm sure he could have sharpened them too.

Ms Moon: In fact, in some ways, the people who buy the poached products are even more responsible than the poachers. Or at last AS responsible.

Sharon: It's shocking to think of a baby as young as Barsilinga being left on his own.

Robin: And it's not just elephants! It's rhinos and chimps and all kinds of creatures.

Unknown: You know, I should get Dave something like that for Christmas. Hopefully I'll remember when the time comes!

Linda Sue: It's good that the raccoons have been "adopted" by the other mother. Many baby animals simply perish if something happens to their parents.

Jenny-O: It's shocking to me. I suppose the people are desperate, but I wish they'd realize the elephants are a resource that will benefit them in the long run if they protect them.

Catalyst: I wondered if anyone was going to comment on those women. When I was there I thought, "Do they REALIZE what this sculpture is about?!"

Allison: I agree, I don't get the allure of ivory at all.

Alphie: Indeed, the end recipients are the ones driving the market. Just like the ones buying rhino horn and pangolin scales. It makes me ill.

Michael: It was worth it! We'll see how long the sharpness lasts, but anything is better than what we had.

37P: Doesn't it? I was impressed. Apparently Gillie and Marc have had public sculptures installed in NYC too.