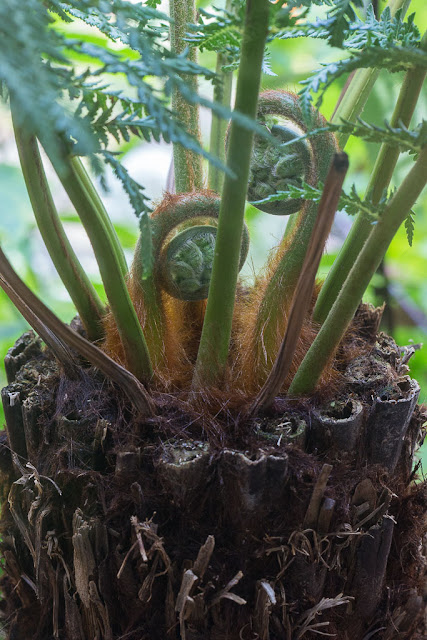 We had a truly perplexing day yesterday, weather-wise. Initially we were told no rain was expected, but then in the morning a 50 percent chance of thunderstorms showed up in the forecast for later that afternoon. As the day went on, the 50 percent dwindled to 10 percent, and the sky remained basically sunny all afternoon and evening. We never saw a drop of rain. We may have heard distant thunder, but it could just as easily have been traffic or the railroad or something else.

That's Dave's tree fern, above, unfurling its new fronds. It seems unfazed by the heat. We've been watering everything like crazy. 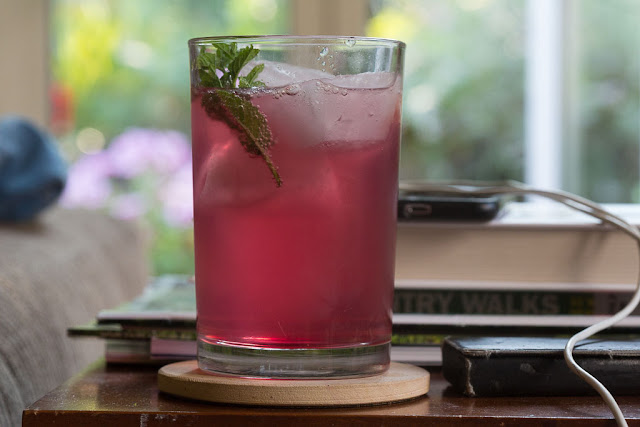 This was my evening cocktail yesterday, a "highland sling," with ingredients provided by the gin club membership Dave bought me. It contained a special cocktail syrup and elderflower "posh pop," and it was OK -- a bit sweet for me. I'm happier with my normal G&T, but it's good to try new things, right?
It required a mint sprig for garnish, so I went outside and picked one, and while there I noticed: 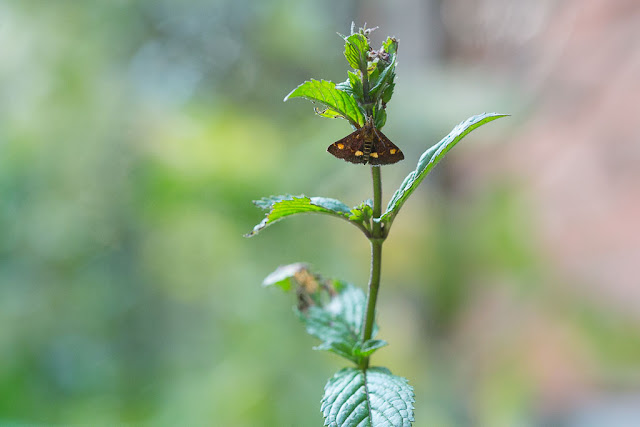 That's a mint moth. Who knew such a thing existed? Apparently they're drawn to mint plants. I find it amazing that we can put something in the garden and the insect appropriate to live on it manages to find it. I don't think the moth is a huge problem, though.
Speaking of which, some of you may be wondering if we got any cinnabar moth caterpillars this year. The answer is no. Our ragwort has gone uneaten and the caterpillars are a no-show. I guess they move around but I've been watching the ragwort in the cemetery and haven't seen any there either. I hope they're not having a bad year for some reason.
I finished Byron Lane's fun book "A Star is Bored" yesterday. It's a novel about an assistant for a Hollywood actress who is suspiciously like Carrie Fisher -- which makes sense because Lane was Fisher's assistant. It's a hoot, as long as you don't mind bawdy humor. Fisher -- umm, I mean, the actress in the book -- has quite a tart tongue.
Oh, and I see that Kamala Harris is Biden's VP candidate of choice. I'm fine with that. Of course Fox News is already picking her apart, saying progressives are unhappy and offering advice from Sarah Palin (!). I'll be so glad when November is here.
Posted by Steve Reed at 7:16 AM

I see that the mint moth feeds on "various labiatae".

Like you, I had no idea that they existed.

Mint moths, wow! You're right about the wonders of nature and how this insects find these plants. I love that. We had two huge Australian tree ferns flanking the entrance to our guest cottage in San Diego. I loved them and they thrived there. I just read the news and thought, "Sarah Palin is giving advice?!?" Did you read the advice? Oh dear god. Anyway, very excited the decision has been made. Harris is exceptional.

Sarah who? Oh yes, her.
It looks like an Australian tree fern. They deal with heat well enough.
A mint moth with a set of four tail lights.

Yay! to Joe’s choice of Kamala. Don’t forget we also ( assuming Trumpster doesn’t win - God help us) have to survive whatever befalls between November and inauguration. A rogue elephant crashing about comes to mind.

That photo of furls of unfolding fern is my favorite of your photos so far! The curlicues are growing what looks like orangutan hair.

Ferns fascinate me. I'm sure you know they're prehistoric--like Sarah Palin. Didn't she kill a mammoth?

I'm thrilled with the choice of Kamala Harris, and also that our Somali-American rep Ilhan Omar handily won her primary--(making her the sure thing).

Love the look of the pink & green drink. (Like Going Gently's new bathroom...)

Love the fern!
And it is amazing how insects can suss out and find the exact plant they need and want. Their intelligence is not the kind we have but it's powerful.
"A Star is Bored." Ha! That's great. Sounds like a very fun book. I hope it comes up on audio from the library.

The fern picture is just delicious - like how your drink looks (although I'm not a gin drinker at all).

I was pretty happy with Kamala Harris too. She seems like she's tough enough to survive what's coming. And I was also thrilled about Ilhan Omar!

November can't come soon enough even though I know the election won't be easy. DJT won't go easily. Your drink looks refreshing. The book sounds interesting. It sounds like the author had a rich source of material. I read one of Carrie Fisher's book years ago and laughed my way all the way through it. "Tart tongue" is a good description.

Love the fern and the moth. You see so many different species of moth there. I think I may need to look more closely in our yard because lately it's been just the boring cabbage moth.
I am happy with Kamala Harris. She's smart, articulate, strong, and ready.

...and people will say so the forecasters are wrong again!

I've never heard of Mint Moths. I do love the mint plants though. You have a super day, hugs, Edna B.

p.s. can you tell us how you manage to link to a specific post in your posts? Thank you in advance.

What a beauty this fern is.

That drink looks good! Gin and Tonic is my go to drink. So it's Kamala Harris. Let's hope that we can see VP Harris after November's election. I don't want to even think of the prospect of Trump winning another term.

Beautiful photos and your drink look divine. I sure can't wait until November either - go team Biden!

That fern has grown beautiful and that drink look delicious. Although I doesn't drink alcohol. If you can remember that orange thing in the white house didn't win in 2016. Hilary had over 300,000 more popular votes than that thing. Russia did something to the electoral vote. During the investigation they know Russia interfered but they refuse to tell us how. I assume they are not going to give anyone else any crooked ideas. That orange thing is already on television calling Kamala nasty. I think Joe and Kamala is going to sit his butt down and do it in a professional way. I know they want to do it another way but refuse to stoop to his level and that is the bottom. He has been nasty with anyone he could be nasty with including the sports teams, and the reporters at the white house and abroad. He need to sit down and shut that pie hole. That what it look like. He eat a lot of chicken (Kentucky fried) so maybe it's a chicken hole. (laughing hard)

AS IF Sarah Palin could ever have advice for Kamala Harris. Twitter was playing old clips of Palin speaking at events during her campaign and it was just sad how incoherent she was. The fern is just lovely.

The Sarah Palin advice was quite unexpected and as nicely written as she could have. I'm still processing it.

Well, now, seeing as how we do have mint growing in our yard (but very little else) I'm going outside right now to see if there are any moths on it, near it, around it, or in the general vicinity!

Mitchell: Sarah Palin offering any advice is, of course, laughable. As you said, dear God.

Andrew: Yeah, I guess being from Australia, heat wouldn't bother them!

Marty: Yeah, that's going to be a very interesting period of time.

Fresca: Yeah, I was so happy about Omar as well! Take THAT, Trump and Fox News!

Ms Moon: Definitely watch for the book. I think you'd get a kick out of it.

Bug: I don't think Harris will be fazed by Republican attacks. And yes, Omar was great news!

Sharon: Fisher really was hilarious. I read "Postcards from the Edge" when it came out and thought it was terrific.

Robin: I don't know why we're having such a good year for moths! At least SOME moths.

Red: Well, the forecasters HAVE been wrong. I guess it's hard to predict weather on an island. The ocean creates so many variables.

Edna: I'd never heard of them either! I left a comment on your blog about linking to individual posts -- hope it helps.

Sabine: It IS really beautiful. So graceful.

Michael: Oh, Lord, I think I'd have a nervous breakdown.

Angelicastar: "Nasty" is what Donald Trump says about women who aren't docile and won't take orders from him. (Or allow him to grab them in inappropriate places.)

Allison: The Palin thing was just so ridiculous.

Catalyst: But it said nothing, really. All she did was cast herself as a trailblazer. Short on substance!

Jenny-O: Yeah, look for them! I don't even know if they live in Canada. Maybe it's too cold there.