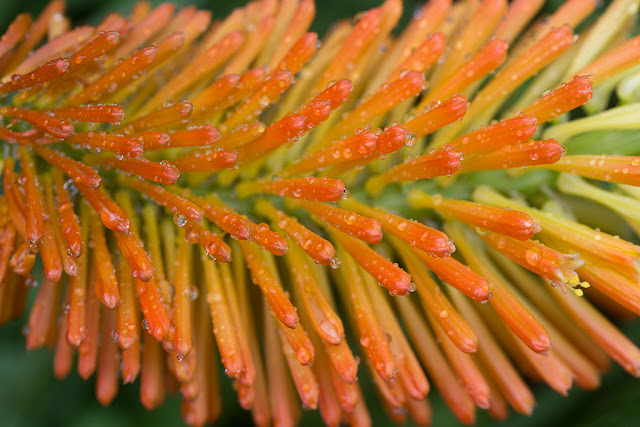 We had another really good rain yesterday. I tried to make a video but most of it came late in the evening when it was already too dark. I swear I could hear the plants almost singing with joy.
The rain is tough on our red-hot pokers (above), which tend to flop over with the weight of the water. 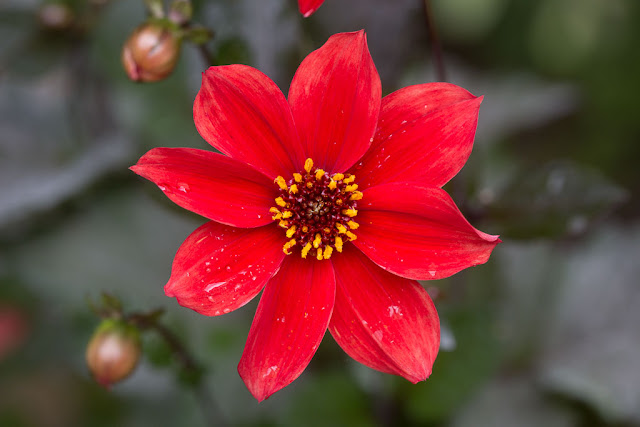 We're still getting new flowers on our dahlias. They can range from bright red to light orange, depending on their age and which plant produced them. (These seed-grown dahlias are all the same variety, "Bishop's children.") 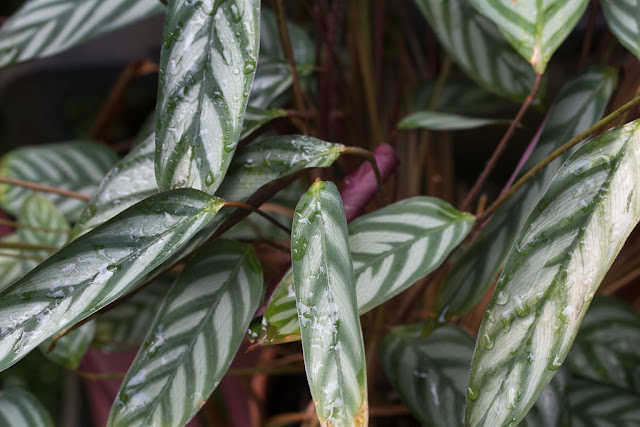 I was walking Olga on Saturday morning when I found this plant (above), as well as some empty pots, sitting on the curb next to someone's rubbish bins. The plant looked terrible -- its leaves were rolled up as tight as cigarettes. I brought it home, watered it and put it in a shady spot, and over a couple of days it has opened up. We'll see how it does in the long term. I think it's a variety of prayer plant. 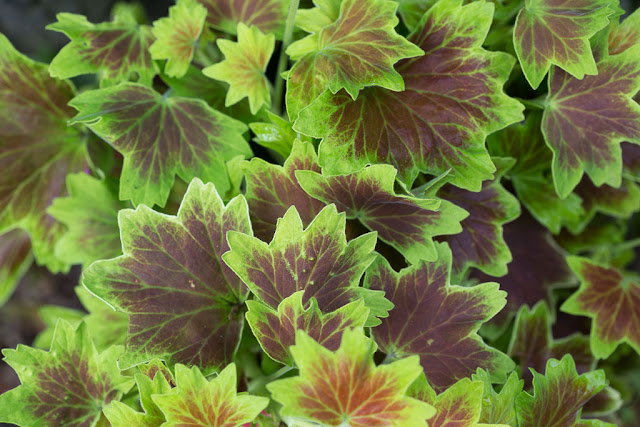 This is a variegated geranium I picked up at the store at the beginning of summer. I love the colorful leaves. 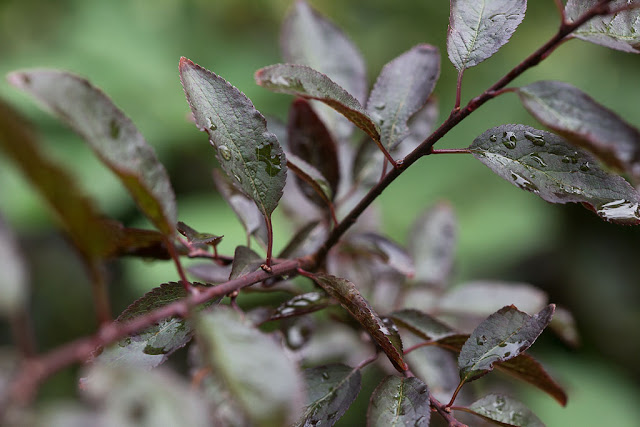 This is our mystery tree, which we replanted to the back of the garden six months ago. It's done well after the transplant and we think we've figured out what it is -- Prunus cerasifera, or cherry plum. (It's one of the purple varieties, obviously.) 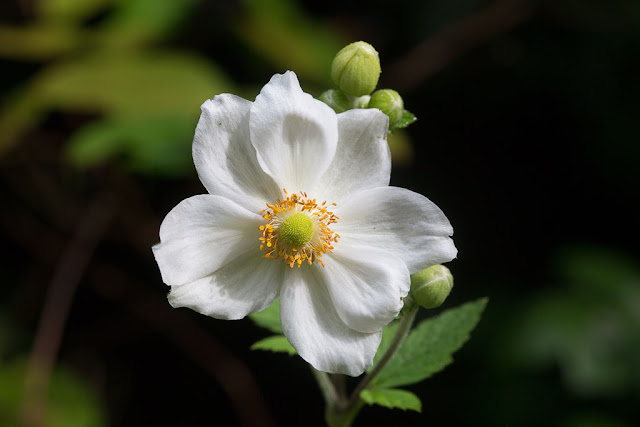 The Japanese anemones are blooming, always a sign for us that it's time to go back to school.
I took Olga to the Heath yesterday. She was quite insistent on going, actually, and basically led the way. We had a good long walk and then on the way home we were joined by a random guy who approached me on the street and asked, as an opener, "Do you believe life is an act?" I thought, Oh lord, who's this lunatic. He was wearing a cross and I thought he was going to proselytize. I said, "I'm not sure I believe that." Undaunted, he walked with us, talking about sentient plants and the psychic Ingo Swann and remote viewing and some other stuff -- but never Jesus. I just nodded and responded as little as possible, and was beginning to wonder if I would ever get rid of him when he kept going toward our high street as I turned toward home. Thank goodness.
Posted by Steve Reed at 7:03 AM

I've seen some pokers of some type out here, but yes, red hot pokers in summer.
Some of us seem to attract the likes of your short term mate.

YP: I had never heard of that song, but I found it on YouTube! If anyone's interested, it's at https://www.youtube.com/watch?v=wPayLGgx_8E

Looks like you were the answer to that plant's prayer.

I absolutely love that Japanese anemone. I don't believe I've ever seen this plant. It does look a lot like the tiny white flowers that I get on my old rose bush, but my flowers only have four petals. Your plants are gorgeous. I wonder who the stranger was and why he picked you to chat with??? You have a super day, hugs, Edna B.

Rain equals new life, renewed life, resurrected life.
No Jesus required. Or even psychic Ingo Swann, whoever he is. Was? I should look him up.

I love seeing all the plants with drops of rain on them. I wish I would see some here. The man sounds a bit off balance. I ran to the art supply store yesterday and while everyone was masked, I did get approached in the parking lot by a man with no mask wanting me to take a business card from him. I politely said "no thank you" but I'm sure my eyes said "are you crazy".

Thank you for reminding me what rain on plants looks like. It's been so long since I've witnessed it. I love that variety of geranium - I've looked at them every spring, but I have not seen one with such lovely leaves.

It's no wonder Red Hot Pokers and Crocosmia/Montbretia look sad when you think of where they originate and the climate there!
Are not Bishop's Children seeds from the variety Bishop of Llandaff? Which is a lovely colour. It is good to see the open faced varieties becoming popular again.

I love seeing the plants from your yard - and that geranium is fascinating!

I would have been so uncomfortable with the guy on the street. How weird!

It seems you prefer talking to plants and dogs rather than random zanies of the human species. Hmmm, does that make . . . you . . . weird?

Your plants look so healthy and beautiful. I love how you rescued that prayer plant. Lucky to have crossed paths with you and Olga.
Interesting weird conversation with that guy. You just never know what's on someone's mind.

What an opening line? I don't think life is just an act but I HAVE heard all the world's a stage. Raindrops on flowers. So beautiful.

We have lots of nutters like that here in Brighton, I think it's a magnet for them. Eyes down when you see one coming or who knows where you'd end up. lol
Briony
x

There is so much going on in your garden! The rain has been good hasn't it? And I am glad it is cooler. Funny about the man who talked to you. I have had some interesting conversations with strange people over the years in London.The most memorable was a man on a train we got into town one evening who was completely obsessed with how the moon landings were not real. He had a whole briefcase full of 'evidence'. My friends all kindly left me to it, probably pleased it was me he had chosen! He became a bit scary in the end but getting off the train solved that!

It's so uncomfortable when a random person comes up to you and starts talking about weird stuff. I never know where to look, and am afraid to tell them to go away because things can escalate so fast. Your garden is looking fabulous.

So you saved another plant and prefer plants to people...missed calling perhaps?

Sentient plants? COOL! I'd have liked to hear what that guy had to say about sentient plants. I'm pretty excited about the stuff they're discovering about how forest plants communicate with one another.

Hm. Now I think of it... Sentient plants...
That guy wasn't Prince Charles, was he?

Mary: Yes, it was praying for me! LOL

Edna: Anemones are pretty common here. There's also a pink variety and one that grows wild in woodlands.

Ms Moon: I should have linked to him! I didn't know who he was either until Mr. Friendly started talking about him.

Sharon: What is he thinking, handing out business cards NOW? Some people are so clueless.

Susan: When you haven't had rain in a while, even the sight of it in pictures awakens a yearning!

GZ: I'm not sure what hybrids the "Bishop's Children" variety comes from! Yours sounds like a good guess, though!

Bug: It was weird. I was afraid he was going to follow me to my door, in which case I'd have kept walking so as not to let him know where I live. I'd have had to come up with some ruse to get rid of him.

Catalyst: Yes! Plants and dogs are much more my speed, and while that might make me weird, I suspect a lot of other people feel the same way.

Robin: It was very odd. I don't know why he was thinking about all that. (Or felt the need to share it with me!)

Mitchell: I should have thought of "All the world's a stage"! That would have been a good comeback to his question.

Brighton: I usually keep my eyes down but in this case it didn't work!

Sarah: To me, the weirdest thing isn't that he thought the moon landings were faked, but that he carried around a briefcase full of evidence!

Allison: Yeah, I just nodded and smiled, basically. I was a bit concerned about what to do if he followed me down my street, because I wouldn't have gone home -- but fortunately that didn't happen.

E: I think a lot of newspaper people are basically skeptical of other people and their motives. It's in my nature!

Fresca: He was talking about some experiment where scientists wired a polygraph machine to plants and then thought about cutting off a leaf or cutting a stem -- and the plants supposedly picked up on those vibes and exhibited signs of stress on the polygraph. I have no idea whether this is for real or not and I didn't try to look it up. If he was Prince Charles I'd have invited him to tea!

love all the pretty foliage and the flowers too in your garden. I'd guess about half of what you have you picked up off the street. Steve the Plant Whisperer.

WoW - These Photos Are State Fair Worthy - OK, Maybe Farmers Market Worthy - Keeping Clicking Away And Thanx For Sharing All The Family Photos From Years Ago - Take Care