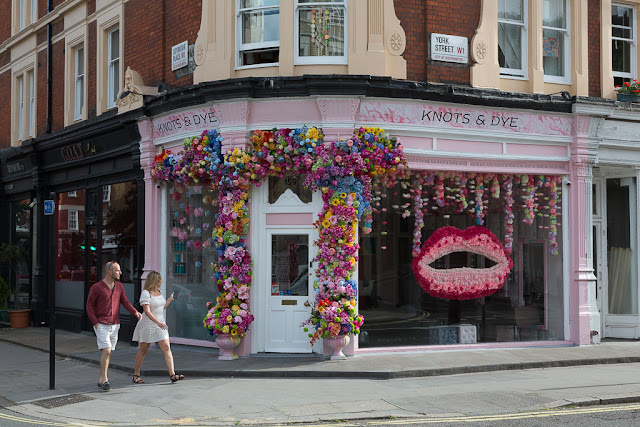 This is a hair salon down in Marylebone. It took me a while to figure out the name -- I mean, "dye" is obvious, but "knots"? Turns out they do hair extensions.

I haven't left the house and haven't done much except routine housekeeping and reading.  I feel like I'm in a weird state of suspension -- I go back to work in just two days, and meanwhile I'm in a holding pattern like a plane circling the airport, waiting for that chance to land. As many reservations as I have about going back to school, I'm really eager to get to work again. 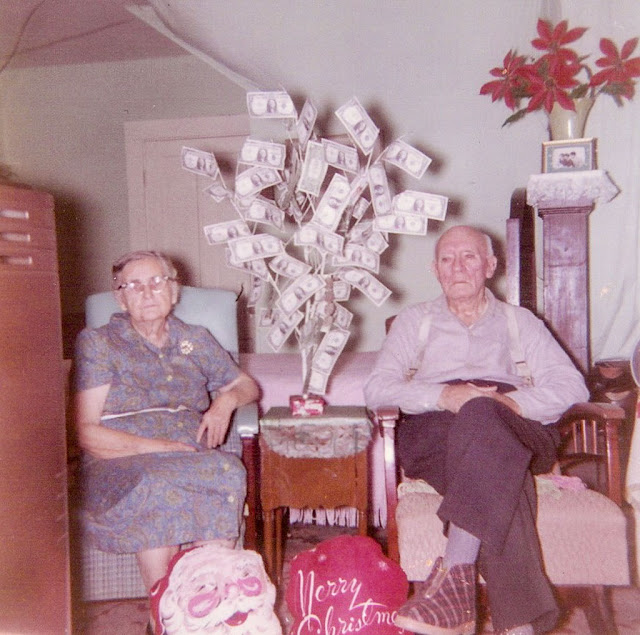 I've mentioned my maternal grandfather a couple of times on this blog, but I've written less about my dad's family. Here's a picture I love of my dad's mother's parents (my great-grandparents). They lived in Arkansas, I believe, and here they're posing with their Christmas money tree. This must have been 50 or 60 years ago. I don't quite know the tradition of money trees, but from looking online I gather that it's a clever way to give cash -- you turn the dollar bills into a tree. I'm not sure whether they were giving the money or receiving it. 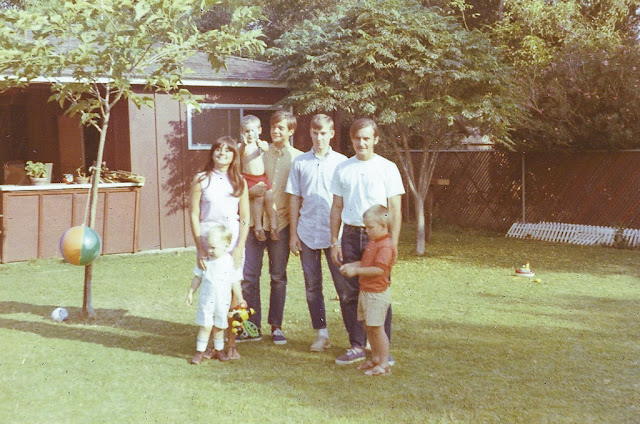 My dad's immediate family all lived in California, where he grew up and where my grandfather (who died before I was born) was a mail carrier. Since we lived in Florida, I barely knew them. In 1969 my parents drove us out west, and I had a rare opportunity to meet my paternal cousins. (Obviously I don't remember this -- I wasn't quite three!) I'm standing on the left (above), with my cousin Linda holding my shoulders. My older cousins, L to R, are Randy, Dennis and Marty. The younger ones are Jimmy and Chris.

There are a lot of photos from this film roll of my older cousins trying to teach me, Chris and Jimmy how to play baseball. Sports-phobic as I am, I never appeared very interested!

I saw most of my cousins again in 1983, when we visited the summer before I turned 17 -- except Linda, who lived elsewhere by that time, and Jimmy, who had died in a car crash. Other than those two times, I've never seen or communicated with them, and now Dennis and Marty are dead as well. I did keep in touch with my paternal grandmother and my aunts via occasional letters, but my California relatives always seemed so distant -- as they were in those pre-Internet days. Maybe sometime when I'm feeling adventurous I'll get in touch with them via Facebook.

You should get in touch with them. You will probably initially communicate a lot and then it will die off, but you will remain in touch.

I think I'd look a lot happier than they look if I had that money tree. lol
Briony
x

YP: Then again, it might have helped! Randy in the states is a fairly common name -- usually short for Randall, though I have no idea in my cousin's case.

Briony: They DO look dour, don't they? They came from the generation that didn't smile in photos -- probably because everyone had bad teeth. Maybe they're annoyed there's not more money on that tree? LOL

If that was money to give, perhaps your great-grandparents were NOT happy to be giving it all away.
Whatever, they were definitely a MeeMaw and PeePaw.
I love the picture of Nots and Dye. So, so colorful! And the couple walking by make it perfect.
I can't believe you're about to go back to work. Strange summer vacation you've had.

Old photos bring back such great memories. As you know, I've been sorting through some lately.
Last night I watched the opening night of the Democratic Convention. It was inspiring and uplifting and so different from what we deal with day in and day out.

I hate to think how old your great-grandparents were in that photo. Maybe 65? 70? I hope to be wearing my skinny jeans and custom-made BTS T-shirt (and looking good in them) until I'm 80. It's scary how OLD people looked in the olden days.

I LOVE these photos. Whether your great-grandparents were giving or receiving that money tree, they sure don't look happy about it. I grew up with a large extended family. Every one of them lived in the Greater New York City Area. I wish some (many) of them had lived in California and I had only rarely gotten to see them!

I wonder how they keep all those fake flowers clean.

I have one cousin from my father's side and none from my mother's side and the one cousin live on the other side of the state. I've seen him less than 10 times in my whole life but he eventually got on FB. he's a Trump man and very religious. sometimes he will comment on my posts and then I have to educate him.

The mention of your west coast cousins and not really knowing them well is similar to my family situation. I grew up in UK/Europe. Dad was in the military and my mother was British so I grew up knowing her side of the family. Didn't come back to the US until my teens. My father's five siblings were scattered all over the US--his parents died when he was a teen. Never met my aunts, uncles or cousins on the west coast. Couldn't even name them all. The aunts and uncles are gone--all would be well over 100. Keeping in touch--especially from overseas--was very difficult in those days so families often drifted apart.

Hope the transition back to school goes well--even if it is all a bit weird. Stay safe--you and Dave.

I had a couple of cousins in Pennsylvania, and one in West Virginia, but the rest of them lived right here were I am now. There were 11 of us, counting my brother and me!

I say Look your cousins up now. Tomorrow may not come. My brother and I were separated from the rest of the family when we were quite young. Even though we had lots of cousins and aunts and uncles, we had no contact through the years. I have finally located a cousin. I'm 80 and she's 83. You don't want to wait this long. Every day my cousin and I get to share is a treasure. Enjoy your day, hugs, Edna B.

p.s. I love the flowers on that salon.

Someone put a lot of work into that shop front!
Yes, do get in contact. Like you say,maybe FB? I know that meeting my 3rd cousin (once removed!) Even though he is Māori, and we are related by his mother , we had so much in common!

So interesting, Steve, I've just been thinking about contacting all of my maternal first cousins lately. There are ten of us and none of us live close enough for a simple visit. Makes me wonder about the evolution of our species and how our community/tribal beginnings led to this kind of distancing.
Love the photos!

Communication these days is certainly different than in previous eras. I remember when I was a little kid that getting a rare telephone call from my uncle in San Francisco was a big event that we planned for and were thrilled with it. Nowadays, I just sit at a keyboard in Arizona and can trade messages with, for instance, a friend living in London.

I think I have two cousins in the DC area, and maybe three somewhere in the south. We were never close so after my parents died there was no more connection. I'm ok with that, I didn't like them when I was young, pretty sure I would not like them now.

I always love looking at old family photos. Your family is sure scattered. Mine is too. Some of my cousins I haven't seen in decades.

BEST old photo EVER! I might try to draw it. Speaking of, I came across a photo of you buying a gorgeous brightly painted pillow in your bright green jacket! Handsome as ever.

Also ,meant to say, good luck with school, don't breath or touch anything

Ms Moon: I suspect they were given the money tree. They don't look like the types to be giving away cash.

Sharon: We watched it too! It's so refreshing to consider another path for the country.

Vivian: My paternal grandmother's father was born in 1879. So he was probably about 80 in that picture. (He died in 1962, so that helps date it.) My great grandmother would have been slightly younger.

Mitchell: They look exhausted, don't they?!

Ellen: Yeah, that's always the risk with getting in touch with people from our pasts. We may not see eye-to-eye today!

Mary: It's especially challenging when you're separated by an ocean. (Certainly in pre-Internet days.)

Bug: It must have been fun to have so many cousins nearby. I liked my cousins (the ones I knew) when I was a kid and I always looked forward to visiting them.

Edna: That's true. There's certainly a level of risk involved in waiting. On the other hand, if I never really knew them in the first place, it's not a huge loss to not be in touch.

GZ: It could be fun, for sure. I think I have relatives here in England on another side of the family, but they're even more distant (on the family tree).

Robin: I know. It is strange now that we're all so mobile and far-flung, when you consider that a thousand years ago we would have all lived in a tight family group.

Catalyst: When I lived in Morocco in the early '90s, it was always an ordeal to plan a call home. We'd write letters and set a time weeks ahead. E-mail has changed everything!

Alphie: I think it was probably a gift for them.

Michael: Yeah, if you consider just my aunts, uncles and cousins, we're literally all over the country!

Linda Sue: I still have that pillow! (And that jacket!) I'll let you know how school goes. I imagine I may have to breathe and touch things. LOL