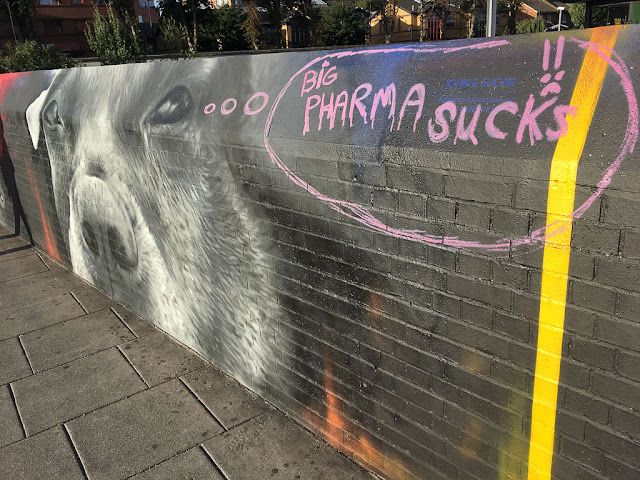 Someone has adorned the mural of John and Sugar on the High Street with a political message against Big Pharma. Of all the things Sugar could be thinking, "food," "ball," "sleep" or "treat" all seem much more likely.

Besides, it seems ill-timed. If we need anyone working for us at the moment, it's vaccine researchers and pharmaceutical companies. Right?

Thanks for educating me in yesterday's comments about Portmeirion china. I'd never heard of it before! You learn something new every day.

The library is slowly coming back together. I've got all the magazines cataloged and put away, and we've developed a system that should let people read them even during this period of viral caution. (Basically, we'll check them out like books, then quarantine them when they return before putting them back on the shelf.) I've got most of the books put away, too.

Today I need to send a reminder message to everyone about what they still have checked out. I also need to go through all our patrons and make sure the ones who have left the school are removed from the system and all their materials are turned in. That might be more challenging this year, since I suspect some people have returned to the states since we closed in March, perhaps rather unexpectedly. 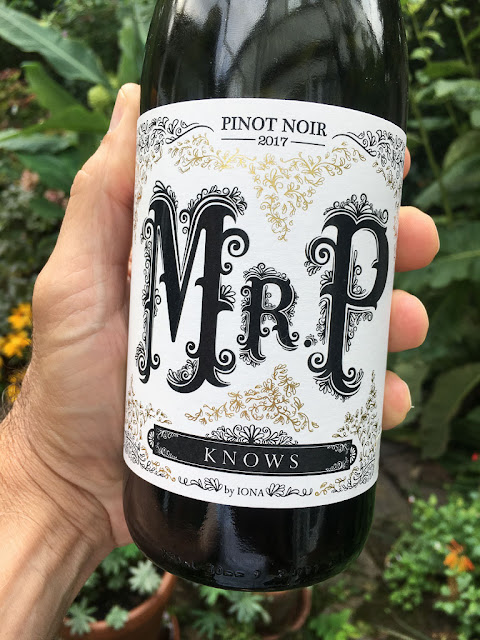 Dave found this bottle of wine at the store a few days ago. We got a kick out of it because all his students call him "Mr. P." I told him he should display it in his classroom, but maybe that wouldn't be ideal, it being wine and all.
I'm not watching any of the Republican convention. I didn't watch the Democratic one either. I much prefer reading about the salient moments in the paper the next day. I think the last convention I watched was the 1988 Democratic convention, when Dukakis got the nomination and Ann Richards made her famous "silver foot" speech. I do remember having a sense that I was seeing history being made, and that was exciting, but I guess I can do without that now!
I read about the appearance of the McCloskeys, the St. Louis couple who brandished a couple of guns outside their house as protesters marched past. They sound like genuinely reprehensible people, litigious and cruel. Did you hear about the beehives they smashed up, belonging to the synagogue next door? And the fight they had with their neighborhood association to prevent unmarried (read: gay) couples from living in the neighborhood? All I can say is, WOW.
Posted by Steve Reed at 7:07 AM