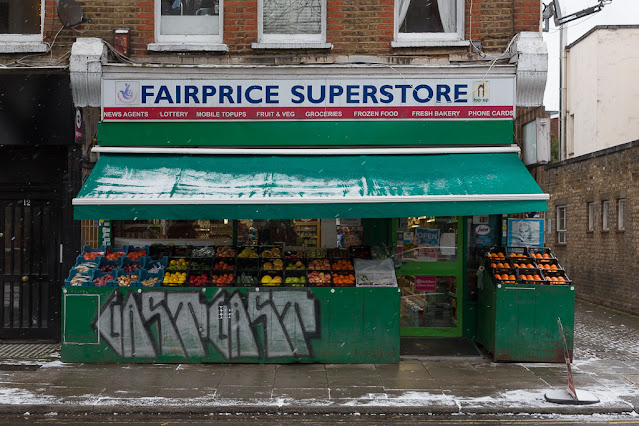 We're still frozen here, but it's not quite as cold as expected. The forecast originally called for temperatures of 17º F (-8.3º C) last night, but according to my weather app, it never got lower than 27º F (-2.7º C). The forecast was so low that I brought in a few more plants and even retrieved the amaryllis bulbs from the shed, thinking it might get too cold in there.

I also wrapped our Chinese banana (below), which is already looking pretty haggard from the frost, to protect the trunk and roots: 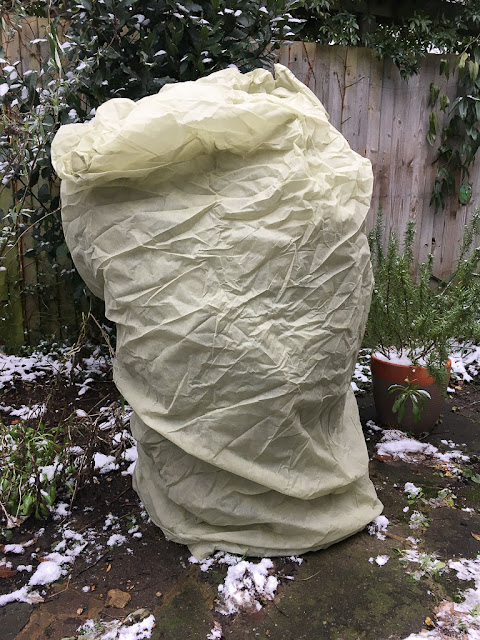 It's supposed to warm up again after Saturday. I'm about sick of all this ice.

Dave and I finished "Halt and Catch Fire," that TV series about the early years of personal computing, a couple of nights ago. In one of the last episodes, as the cast is dispersing to go their separate ways, one of them mentioned taking a cross-country road trip from San Francisco to the East Coast. "I'd like to be in Carson City by nightfall," she said, and suddenly I was filled with longing. "Oh, that sounds wonderful!" I said dreamily to Dave.

Not the Carson City part, necessarily, but the road trip. I haven't taken a long driving trip in years and years. Dave doesn't share my enthusiasm for long car trips -- in fact he groaned at my exclamation -- but when this coronavirus craziness finally lifts and travel is doable again, I'd love to rent a car and spend several weeks driving around the USA. There are so many places I haven't seen, or have barely seen, particularly out West. Of course, we also have Olga to consider, so we may not be taking that trip real soon.

We could do a road trip in the UK. We haven't rented a car here in the entire time we've lived here. And then we could take Olga. But it wouldn't be like driving those sunny, wide-open highways in Utah or Wyoming or Texas.

Speaking of cars, there's a car here in the UK called the Renault Zoe that makes music. It's the strangest thing. I'll be walking along the street and I'll hear a sort of tone, a hum, and sure enough, a Zoe is driving past. Apparently it's an electric car and you can even choose the tone you want it to produce from several options. I'm not quite sure how it all works, but here's a video. I don't think it fully captures how distinctive the car sounds on the road. Anyway, just a little automotive curiosity, there.

(Top photo: A neighborhood shop in South Hampstead.)
Posted by Steve Reed at 6:21 AM

I had heard about adding sounds/music to electric cars. I can understand it. We still scare the crap out of people when we're in our Prius. Not a sound. Anyway, I too would love a road trip. However, mine would be across Spain. SG's not as enthused. Day trips are fine with him. And our cats have become very used to us being around all the time.

A road trip across Yorkshire would be rather like a road trip across Texas but with the added benefit of historical sites and natural beauty. You could also eat genuine Yorkshire puddings and meet some of the lovely people who live in Yorkshire. Seriously though, it is a shame that you and Dave have not rented a car since you came here. It is so easy to drive on the left - just don't get over-confident about it!

That car is a curiosity! I wonder why it 'sings'? Off to google!

Interesting video. I hope you get your road trip someday.

If my car ever starts singing, lock me up.
Seriously, though, why do we need this?

It's not even driving on the left that's the problem -- I did that all through New Zealand and was fine with it. It's that we don't have a British driving license. Apparently if you've lived here more than a year, you need to use a UK license to rent a car, or so I've been told. (Admittedly I haven't investigated it.)

Oh, that's a good point -- it's a way of giving the car some kind of sound for the awareness of people around it. I never thought of that.

It will happen! Just a matter of when!

Ha! Mitchell made a good point above -- maybe it's to make the car more audible so people are aware of it. Electric cars can be awfully quiet otherwise.

That's a pretty small superstore, I must say. One has to wonder how fair the prices actually are.
Yes. Mitchell was right, I'm thinking- the car "sings" to alert others to its presence.
Too bad you couldn't have driven to Houston with Glen although that's a pretty straight forward get-there-and-back trip with a very specific goal in mind.
I hope your little banana makes it! It probably will.

I know what you mean about the wide open road. Several years ago, my DH and I flew to SLC and rented a Mustang convertible (top down almost the whole time). We spent 10 days in October driving to and around (and hiking) the the big Five national park there (e.g. Arches, Canyonlands, Capitol Reef, Bryce and Zion) and then back up to SLC through the Wasatch Mtns. It was glorious. Took a photo of a speed limit sign...80 mph...and pretty much everyone was driving faster on those long stretches. :) Pretty sure this would be a dream trip for you.

A singing car? I'm not sure how I feel about that. A nice road trip sounds very appealing to me too! I would very much like to drive up to Monument Valley.

I love road trips. On the other hand the micro manager hates them.

I loved road trips when I was young. The first time I drove across country I was 18 years old, from New Jersey to California. I fell in love with our beautiful country. I drove many, many times east to west, west to east. One of my favorite journey was driving across Canada. I hope you do make the journey someday after this crazy pandemic is over. I hear the redwoods in northern California are beautiful!

Dennis has a hybrid which is silent. Sound is important . Sarah is an amazing driver, as a passenger I am in awe. Driving there is a puzzle and the lanes are so narrow. To get her license was quite the ordeal, too. Personally i would never pass, but must say, the places where one can go with a car there are pretty fabulous!

There needs to be a balance between car noise needed to alert others and noise pollution from cars. Don't know the answer - just wondering...

I'm sure it's a safety feature as those electric cars are eerily quiet. They creep up on pedestrians. My late husband loved road trips and we did many memorable ones. I'm not as big a fan of riding in the car for long periods of time, but there is no better way to admire the scenery or get a feel for the area.

I'm thinking that Olga might really enjoy a few local road trips. Crossing the USA can wait till later. I hope you get to take your trips. Enjoy your day, hugs, Edna B.

My favorite road trips were when we lived in Mexico. Two days to the U.S. border to renew our papers. When stretch of about 100 miles was straight and level and my good Old Blue (a VW Quantum station wagon) cruised at over 100 miles per hour! And yes, that "superstore" looks more like a neighborhood market (or bodega) to me.

https://www.dangerousroads.org/north-america/usa/6579-salmon-river-road02.html One of the best roads on the way from Wyoming to Washington

Mitchell's point is indeed a good one. As you say, Steve, "awareness of people". By way of example: In the motherland, naturally not in England, a bike will be equipped with a bell. A bell you chime before you creep up on either other cyclists or pedestrians from BEHIND. I swear, I won't be run over by a number thirteen bus but hospitalized by one of those crazy psycholists, or those strange electric scooters that go at an insane speed in pedestrianized areas and walkways.

Having said that, as everyone seems to be plugged into some sort of audio when on the move, how much of an audible warning does filter through?

One of a murderer's many problems is where to hide the body. Steve, dear sweet Steve, you have found the perfect place. The corpse, well wrapped up, under the guise of a Chinese Banana Tree in need of protection. Well, perfect until frost gives way to spring and smell. Still, buys you time to think how best to proceed further down the line.

Nothing Like The Open Road - Stay Strong - Enjoy The Weekend

Long road trips are the best, the US and Australia are well suited for road trips.
The UK not so much...
Alphie

Yeah, it will be fine. It's a variety that's supposed to be frost-hardy. We normally don't even cover it, but we usually don't get THAT cold, either.

See, that sounds AWESOME. I would love a trip like that! I drove through Zion and saw the Grand Canyon with my family back in 1984, but we barely got out of the car!

It's a pretty nice sound, actually. I suppose "humming" is a better word for it.

And where you live, once you get out of town, there's a LOT of open road!

That sounds amazing! You're so lucky to have done that. I'd love to just meander and stop whenever and wherever I wanted. A cross-Canada trip would be awesome too.

I will keep that road in mind! Apparently licenses ARE hard to get here, because the roads can be challenging, as you mentioned. But we know lots of people who have done it and I suppose we really need to at some point.

I find this a sort of pleasant noise -- which is why I equate it to music. It sounds musical to me as the cars pass when I'm on the sidewalk. But I suppose others might have a different opinion.

Yeah, I never even thought about the safety factor. I'm sure that's it. I like train trips, too!

Olga has been with us on several trains, and she always seems to like looking out the window. I often wonder what must be going through her head, though!

As long as there's no coyote or armadillo wandering in the road!

A VERY temporary solution at best!

I agree! I need some open road!

Australia would be great! Dave and I plan to go one of these days -- maybe that's the solution to my road-trip yearning. We'd need a LOT of time, though!

We have done loads of road trips in the UK and I can recommend the coats areas of Wales and Cornwall, also the back roads in Wiltshire (Avebury, Silbury and on to Stonehenge) and those picturesque places in Somerset which are (like) film sets for 1950s pub villages.