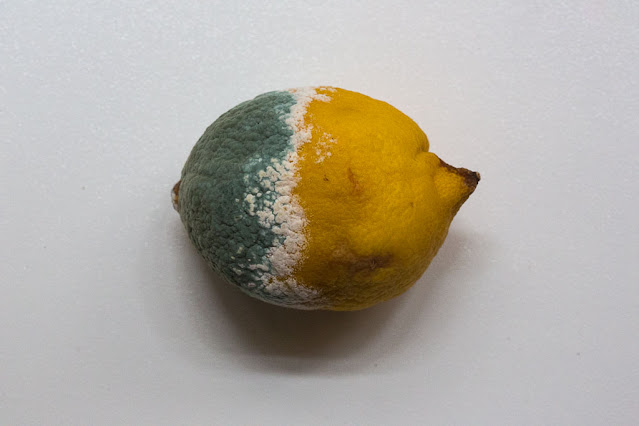 I found this lemon in the back of the produce drawer in our refrigerator, and it seemed both repellent and weirdly intriguing.

It has nothing to do with this post, really. I just needed a picture and that was an eye-catcher. Or an eyeye-catcher, you could say. (You'll shortly see why.)

I've mentioned before that I went through a poetry-writing period when I was younger. During this time in the mid-1980s, when I was taking a poetry class at college and working in downtown Tampa, I would often walk to the downtown library on my lunch hour or after work and peruse the poetry shelves.

One of the books I discovered there was Aram Saroyan's eponymous book from 1968. It was printed in a typeface that suggested it came straight from a manual typewriter, and it was full of curious little minimalist poems, including his famous and controversial one-word poem "lighght." (No, that is not a typo.) Most of them stood alone on a stark white page, with a blank page facing, so that each turn produced only a word or a handful of words. Sometimes not even words -- just pieces of words or even a single modified letter. Flashes of language.

"Eyeye" was another. Two eyes, which makes sense -- but united into one image, like the world seen by two eyes. Read it aloud and you sound like a pirate.

I was thoroughly dumbfounded by this poetry. Saroyan, whose father was famous novelist and playwright William Saroyan, wrote what's known as "concrete" poetry, or poetry that is as much a visual work as a readable one. In fact, many of his poems can't be read at all. They're more like an experience.
Here's another example that I remember from that book: 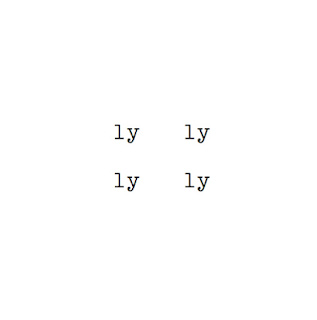 At the time I thought this kind of work was silly, and I remember cynically presuming that Saroyan got published mainly because of his father's connections. But that poem lived in my brain. I never forgot it.

It brought to my mind the "-ly" suffix on adverbs like "slowly" or "chaotically." "Squarely" is an obvious interpretation. Perhaps it's a series of descriptions with a missing core -- "slowly" without the slow, "chaotically" without the chaos. The repetition emphasizes and multiplies the inherent absence. Or "squarely" with the square implied rather than stated -- or maybe it is stated, but differently. I've never read an "official" critical assessment; that's just my interpretation and I suppose someone else might get something else out of it.

Other Saroyan poems repeated the word "crickets" across or down the page, evoking the endless, repetitive sound of the insects. The poem "lighght" is simply that word, standing alone -- an intentional misspelling that makes us pause on the idea or image of light. If the word were spelled correctly it would "pass straight through you," as writer Ian Daly said. The misspelling makes it stick, but not too long -- it also retains a stark, instant quality.

This week I went down an Internet rabbit hole reading about Saroyan and his minimalist poetry, which was republished in a collection 13 years ago. Some of the articles I read are linked in this post. The fact that I was thinking about it is evidence of its surprising durability and effectiveness, I suppose. It took me 35 years to realize it might not be silly after all.
Posted by Steve Reed at 6:30 AM