Remember how I staked up the daffodils in the garden? Well, some critter is having fun with the stakes at the daffodils' expense. I went out yesterday and found one of the stakes lying in the grass, the string gnawed in half, daffodil heads strewn about. This has happened a couple of times. It seems an odd thing to play with, but somebody out there is amused by it. 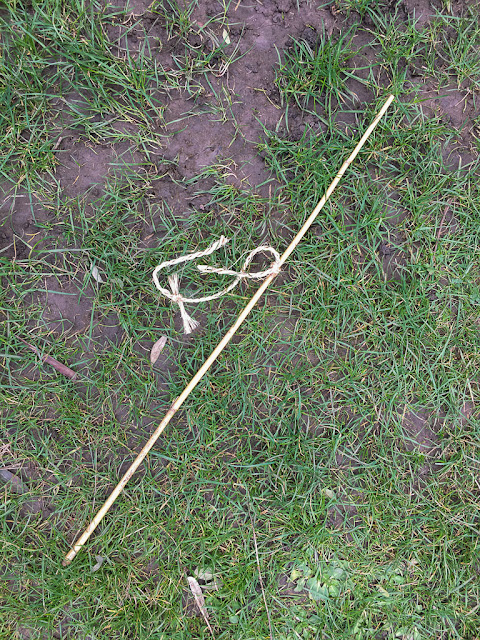 I guess life is pretty boring for garden foxes when they're not being chased by dogs. They need a toy.

And now the daffodil hospital on our kitchen windowsill has several more patients. (I guess it's more of a hospice than a hospital, truth be told.) 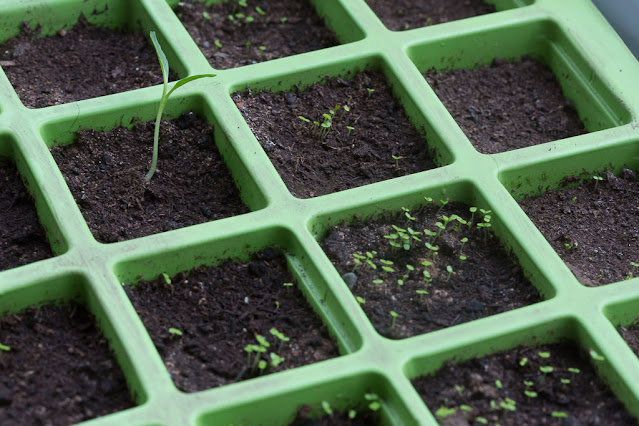 Here's what our seedlings look like -- as you can see, I have one corncockle at upper left, and a sprinkling of tiny foxgloves. Still nothing from the honesty (I'm surprised!) or the jimson weed. 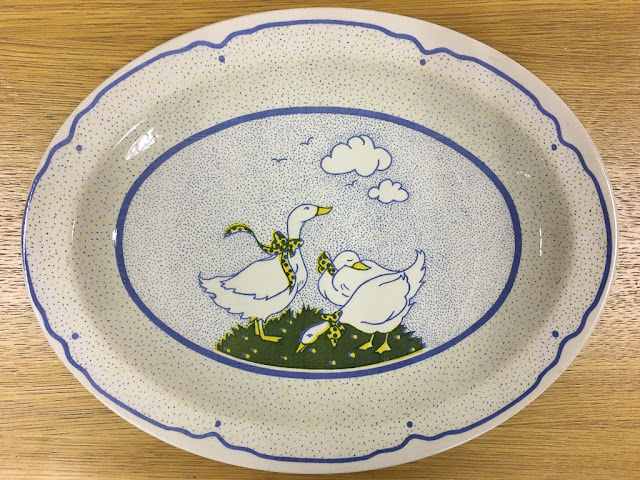 I was walking to work on Thursday when I found this plate in a box of stuff left out with someone's trash. It's not really my style -- more "Pioneer Woman" than "Bald Fiftysomething Gay Man" -- but I picked it up anyway. We have a cabinet of useful dishes at work, for office parties and that kind of thing, so I washed it up and added it to our stash.

Prompted by several of you, Dave and I watched "Murder Among the Mormons" last night. We found it interesting and although I have a dim memory of hearing about the "salamander letter" at some point in the past, I didn't remember anything else about the case, so it was mostly new to me. I was a freshman in college when all that went down and I'm sure I wasn't paying much attention to the news. I read Jon Krakauer's book "Under the Banner of Heaven" years ago and that was a riveting account of Mormonism, particularly as practiced in a couple of fundamentalist communities in southern Utah and northern Arizona. It may have mentioned the "salamander" case as well, I'm not sure.

I took my first Covid test yesterday. As school reconvenes on Monday, the administration has asked everyone to get tested and to be tested regularly in the immediate future, in an effort to catch asymptomatic cases. We've all been given self-tests to perform at home. Well, yesterday I had a test administered by a health worker at school -- just so I'd know what to do for the self-testing. It was negative, needless to say. It seems unlikely this precaution will turn up asymptomatic cases but maybe it will.

Dave made some terrific chocolate chip cookies yesterday -- in fact, more chocolate chunk than chip. He broke up a dark chocolate bar and incorporated it, as well as toasted walnuts, into the cookie dough. When he was baking, he exclaimed happily at how well they were turning out, and I said, "Looking good?"

"No!" he said, in mock annoyance. "They're looking fabulous!"