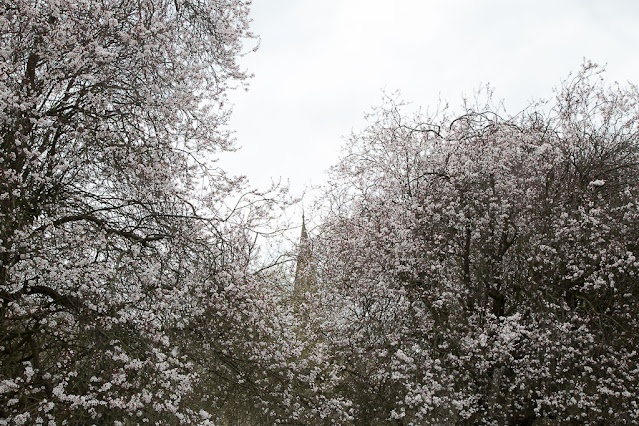 That snowy-looking landscape is actually springlike -- those are blossoms in the trees, with the steeple of the cemetery chapel just beyond. The early blooming trees all seem to have very pale flowers, white or slightly pink. The brighter cherries and crabapples come later in the season.

We went to the cemetery partly because, in late morning, our upstairs neighbors the Russians surprised us by suddenly DEMOLISHING THEIR KITCHEN! I don't mean a domestic spat. They have those all the time. I mean workmen with sledge hammers and drills and god-knows-what-else ripping the cabinets off the walls and smashing all the tile. They hauled all the appliances and the sink out onto their terrace, on the roof of our living room.

The sound was deafening. It's weird, because I'm pretty sure they redid the kitchen just a couple of years ago. I think Mr. Russian did it himself. Maybe he screwed it up, or maybe they just didn't like the end result. Who knows.

Anyway, yes, Olga, Dave and I all went to the cemetery to escape the wrecking crew. 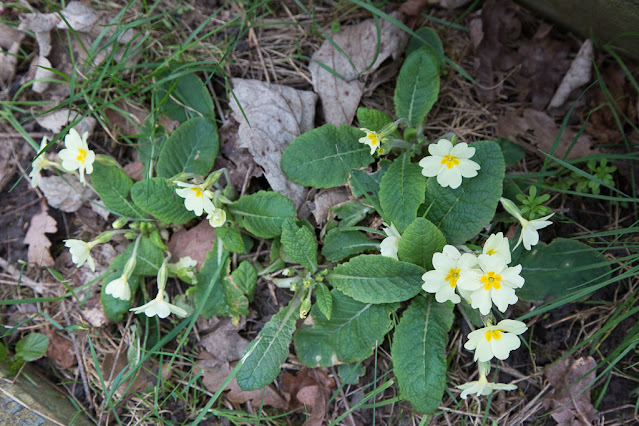 The wild primroses are blooming again. There aren't as many as in past years, partly because the cemetery has seen so much foot traffic during our lockdowns. Like Hampstead Heath, it's had a lot of visitors and many of the plants have been trampled. These are tucked between several gravestones.

Back home again, we also spent time in the garden repotting many of our plants to get ready for spring. 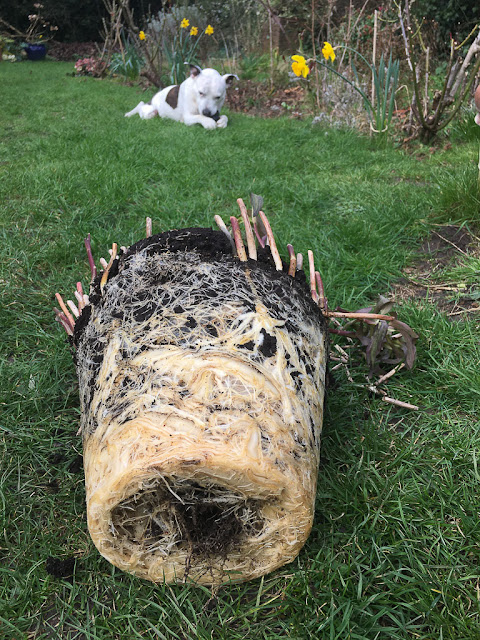 This is our poor alstroemeria, or Peruvian lily. Have you ever seen anything so pot-bound in your life? Dave divided it -- just took a shovel and hacked it in two -- so now we have two of them. (Assuming they both live; it seemed like a pretty brutal procedure, but he swore they'd be fine.) 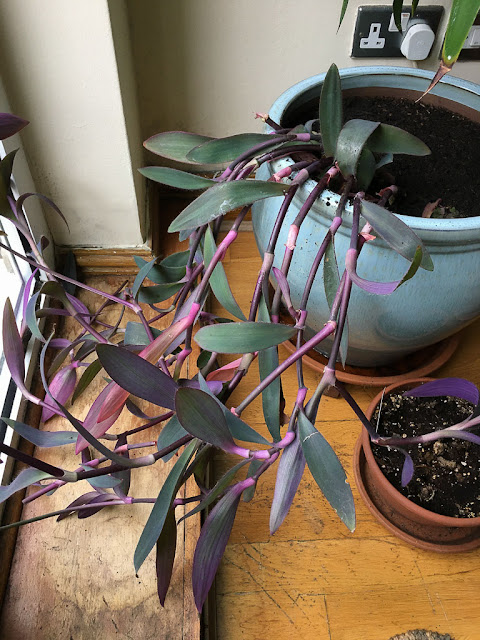 And we bought a gigantic new pot for our purple heart, which has been root-bound for a while now. It's greener and leggier than it should be because during the winter it doesn't get as much sun as it would like. It's a tropical plant, and ideally it should look like this. I think when the weather warms up I may move it outside for the summer, along with the avocado.

We bought the pot online, and you should have seen the packaging that was used to ship it -- giant coils of rolled, wadded brown paper. I've never seen so much paper in my life. I was afraid the recycling guys might not take it all, but they did. I hate to think of the carbon footprint of that one purchase. (But at least it wasn't plastic.)

I also repotted one of our Thanksgiving cacti and our sage, and I lifted and added soil to our Chinese lantern and a couple of our geraniums, which had sunk way too low into their pots. There's more to do, of course, but that's a good start.


Here's some scratchy time with Olga. See all those black spots on the back of her neck? She's always been a spotty dog, but they've become more pronounced as she ages. Her neck used to look much more white. I don't know whether her fur is getting thinner or her spots darker!
Posted by Steve Reed at 6:33 AM