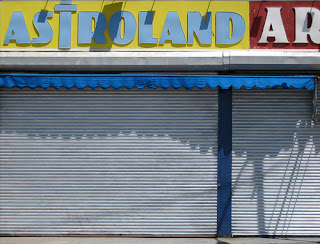 When Mom and I were out on Coney Island, a lot of the amusements were closed. As I mentioned before, we were there on Monday around noon - not exactly peak time for the attractions. The Astroland amusement park had some folks in it, but many of the arcades were shut down.

Astroland is supposed to close permanently after this summer. It's a very old-fashioned sort of carnival midway, with rides and games and stuff like that. A developer has plans to make the area more upscale. Right now it's definitely the land of cotton candy and tattoos.

The legendary Cyclone, an old wooden roller coaster, will remain. I'm not sure about the Wonder Wheel, but that's historic too, so I imagine it will carry on.

I think this aura of age and decline is what led my Mom to call Coney Island "sad." But it also has a kind of nostalgic charm. Even the name - Astroland - sounds so 1957, full of mid-century hopefulness and optimism.
Posted by Steve Reed at 11:33 AM