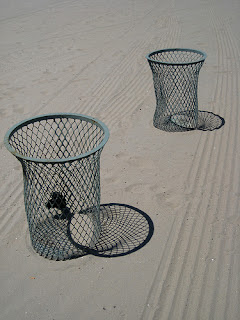 In Coney Island, we had an obligatory walk on the beach. We went down to the waterline and I stuck my fingers in - it wasn't as cold as I was afraid it would be. The beach is wide and pretty clean, considering all the people who congregate there, but you've definitely got to keep an eye out for the occasional piece of broken glass.

I forgot how harsh the sun is on the beach. I usually wear a hat, but I often don't cover my arms or my neck when I walk around in the city, and I seldom get burned. On Coney Island, though, in a relatively short period of time, I got a bit red.

The temperature in New York has been freakishly cool the last several days. I actually wore a jacket to work yesterday, which is unheard of in the middle of June! It's nice to not have to turn on the air conditioner, though.
Posted by Steve Reed at 12:45 PM