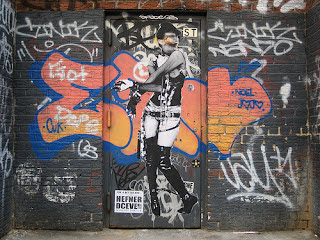 After I met Reya and Ched for lunch on Wednesday, I walked back to the subway and passed this fantastic wall. It's come a long way from its appearance a year ago. The big paste-up is by WK Interact.

My lunch conversation with Reya and Ched touched briefly on koans, the Zen riddles I'd written about a few days before. They were both curious about the nature of koans, and I gave a kind of bumbling explanation. Here is an effort to clarify.

One of the standard beginning koans is "Mu." It is presented like this:

A monk asked Master Joshu: "Does a dog have Buddha-nature?"
Joshu replied: "Mu."

In considering this koan, the practitioner meditates on Joshu's message. What is Mu? What did Joshu mean by that response?

Once again, I am not an expert on koans. But my understanding is that while meditating, the practitioner literally breathes "Mu." By coming back again and again to that word, almost like a mantra, and considering the meaning of Joshu's answer, he or she opens up to a new way of thinking. Or maybe really non-thinking, because it's not literal or cerebral, but much more visceral. The practitioner goes back to the teacher with an expression of that realization, and the teacher may or may not accept it.

Responses to koans don't have to be words or explanations. They can be sounds or gestures. And after the initial response, the teacher may press for more, leading the student to go back and mull it over further. People may work on a single koan for months or, I'm told, even years. (Here is an interesting article if you'd like to know more.)

I've mentioned my own reluctance to start a koan. In fact, I'm about to embark on Mu, which fills me with trepidation. Especially since I have trouble even with a very general explanation over lunch!
Posted by Steve Reed at 11:07 AM