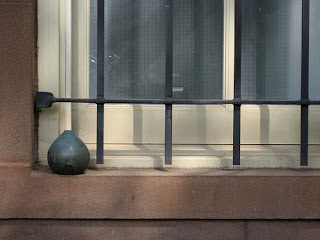 As I was walking around in Brooklyn I passed this house, with this little vase sitting on the windowsill outside. I was impressed that someone could leave something like this outside without it being stolen. Of course, who knows if it's still there!

Saw an interesting movie over the weekend: "Paprika," an animated Japanese film. I've been into some Japanese animation - including nearly all of Hayao Miyazaki's movies - since I saw "Spirited Away" several years ago. "Paprika" was different - flashier and faster paced than Miyazaki, and not entirely coherent - but it was visually beautiful. The Japanese really take animation to new levels of sophistication.

I especially liked the movie because it wrestled with cultural themes like the difference between reality and dreams or delusion, and the balance of oppositional influences (like the male and the female). It was also skeptical of technology. In this way it was very Miyazaki, or maybe just very Japanese.
Posted by Steve Reed at 11:25 AM