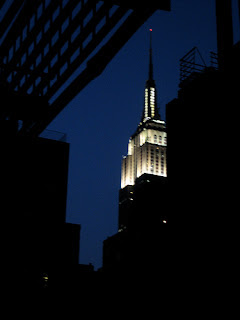 Continuing on the recent "view from my window" theme, here's my view of the Empire State Building. I took this at dusk two nights ago. I especially like the nights when the ESB is lit with white lights - the colors change constantly, depending on the season and holidays, but I go for the simplicity of white. It's very Grace Kelly/Audrey Hepburn, as opposed to the colored lights, which are kind of Stella Stevens.

Most neighborhoods in New York City have very distinct identities. My neighborhood, on the other hand, is kind of an in-between zone. I've mentioned before that the AIA Guide to New York architecture calles my neighborhood Rose Hill, but that's an old historic name that I never hear anyone actually use.

I think we should call ourselves "SoMuHi," for South Murray Hill. Rolls right off the tongue, doesn't it?
Posted by Steve Reed at 11:37 AM