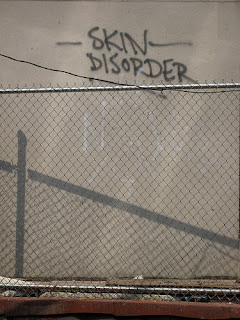 Now here's some bizarre graffiti. Is this someone's street name? If so, maybe I'd rather not meet them.

Mom and I stayed close to home yesterday. We went to the Union Square Farmers Market in the morning and bought a bunch of vegetables, and made a big salad for lunch. Then we went to Madison Square Park in the afternoon, only to find that it had been taken over for a huge Barbecue Festival. We checked that out briefly, and then went to Stuyvesant Square to sit in a quieter spot. (And found another street fair on the way. There's always something going on in NYC!)

Last night I took her to a restaurant near my house called "Country" that I've wanted to try. I had quail, which I've never eaten before, and I have to admit it made me feel awfully guilty to see that poor little bird sitting on my plate. A chicken seems so much less vulnerable!
Posted by Steve Reed at 11:06 AM