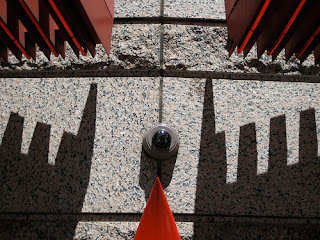 Well, Hillary was a no-show. See? You never know what to expect from the Pride Parade.

I met up with my friends Rob, Dan and Jimmy to watch yesterday’s festivities. We gathered at the corner of Fifth Avenue and Eighth Street, which put us completely by accident at a strategic spot, where the parade turned to go into Greenwich Village.

Of course, there were all the elements one would expect: The Speedo-clad guys, the corporate floats, the big advertisements for bars, the politicians. (Chuck Schumer did show up, and Hillary’s people were there with signs, which I thought was kind of a cop-out. But I guess she’s probably busy working the crowds in Iowa, or wherever.)

The parade was so long that after watching for a couple of hours, we went to get something to eat. When we came back, the drag queens were still on the march. (My favorite was dressed as Madonna circa 1991, complete with conical brassiere and long I-Dream-of-Jeannie wig.)

There were marchers from churches and synagogues. (No gay Muslims, though - at least not that we saw.) There were floats carrying elaborately dressed Peruvian gays and Brazilian gays and Venezuelan gays and Caribbean gays. There was a float for a Mazda dealership in New Jersey. Apparently, pretty much anyone can have a float in the Pride Parade.

Sure, it’s all a little nutty, and quite a bit over the top, but a little celebratory nuttiness is called for now and then!
Posted by Steve Reed at 11:19 AM