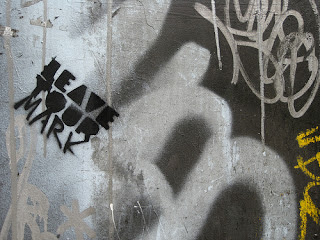 I found this stencil on a mailbox over the weekend, and it seemed appropriate because my Mom and I had been talking about this very idea: leaving a mark on the world.

Our conversation was inspired by our visit to The Cloisters and all its medieval art. We talked about all the nameless people who lived when the art was created, who worshipped it, who were born and died during the 100 years between one piece and the next and in the hundreds of years since. They lived in complete anonymity, and when they died, and those who knew them died, they utterly disappeared.

The next day, on the way to Coney Island, we passed a cemetery where headstones were packed together so tightly that it looked like an aerial view of Manhattan. Burial in general is a disagreeable notion, but headstones seem like pure folly. Why do we all need our own little rock? Do we think it will prevent us from being forgotten? Who are we kidding?

I've always liked the idea of just disappearing. When I die, I don't want a headstone. I don't want to leave a mark. I want to be like all those anonymous millions who lived before and rejoined the vast pool of the cosmos when they died, without holding on desperately to the illusion of a permanent, individual identity. Some might call me morbid, but I think vanishing is a beautiful concept.
Posted by Steve Reed at 11:02 AM