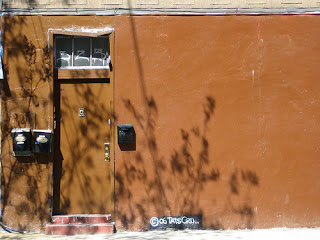 A few days ago, my blogging pal JDZS posted an article on synchronicity, Jung's word for events that seem to indicate some underlying pattern in our existence. I told JDZS at the time that I thought our lives were chaotic, that there really is no underlying pattern or organization, but that humans often build one when they look back on unrelated events and find that they seem connected.

I'm doing exactly that this morning, as I look back on the past week. I mentioned my brother's dog Utah dying on Friday. But I didn't mention Sandino, the fluffy gray cat belonging to my friends John and Sue, who also died last week. And last night I learned that my friend Kevin's cat, the elegant and mischievous Sassafras, died yesterday.

None of these animals were young. But there's still a measure of shock that comes with the death of a pet, no matter its age, and the fact that I've known so many trustworthy companions who died within the past week does indeed seem like some kind of unhappy synchronicity.

These were the pets of our youth, the ones we adopted as we set up housekeeping in our post-college years (or in my brother's case, during college). Yesterday I mentioned my old cat Howard, who I adopted in college and who died a few years ago. My friend Sue lost a cat of similar age, Chester, around the same time.

The connection, the synchronicity, in all this is our own transition out of our young lives. We've all entered a new space, this odd place called middle age, and while it's not to be dreaded, it demands adjustment. Life is a continual evolution of gain and loss, and within the past few years we've all been saying goodbye to the remnants of our twenties. (Not to be premature, but my cat Armenia's recent illness is also an element of this.)

Buddha pointed out that loss is inevitable. When it happens, we can't cling. It's hard, but clinging only makes it worse. All we can do is open ourselves to the advancing years and face them with equanimity, remembering those who came with us as far as they could, and carrying them on as part of ourselves.
Posted by Steve Reed at 10:50 AM