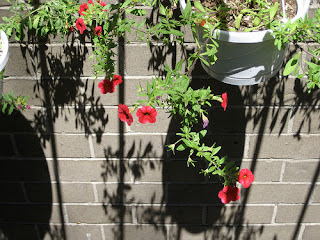 I feel a little bit as if I’ve dropped into a black hole for the past week. The office move took up so much of my time and energy that I haven’t been able to do much else. I did get out and take photos on Saturday, and of course there was the parade, but I haven’t been sitting at all. I’ve missed my quiet time to reflect and collect myself.

I did watch a great old film two nights ago: “Forbidden Planet.” Remember the chorus from the song “Science Fiction Double Feature” from “The Rocky Horror Picture Show”?

Ever since I first saw “Rocky Horror,” I have wondered about “Forbidden Planet.” So I rented it, and what an awesome old sci-fi movie it is! From 1956, it’s more than just a yarn - it has a message, like a lot of the old “Star Trek” shows. Highly recommended!

I’ve also learned that one of the theaters here in New York has a midnight showing of Rocky Horror on weekends. I haven’t seen it in a theater for 20 years or so. I might just have to go - if I can stay up that late.
Posted by Steve Reed at 11:07 AM