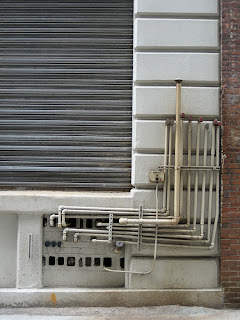 Yes, there is actually a neighborhood called Dumbo. It's actually an acronym for Down Under the Manhattan Bridge Overpass, which pretty much describes exactly where it is.

I went to an interesting talk Friday at the Zendo about koan study. As I mentioned not too long ago, I've never done koans, which are more or less Zen puzzles that allow some insight into Buddhist teachings. In fact, they intimidate me.

But we did an interesting exercise in which we paired off and one person in each pair asked the other the famous koan, "What is the sound of one hand clapping?" When we gave an answer, the questioner said "thank you," and then asked the question again -- over and over, for ten minutes.

You haven't lived until you've tried to answer a rationally unanswerable question over and over for ten minutes.

I started with probably rather unoriginal answers like "everything," and "nothing," and by the end I was making sounds and pounding the floor. Your capacities get pushed to their limit, and the idea is to not let your mind intervene in your answer - just let it come, whatever it is. If you truly enter the koan you don't answer with your rational mind and you begin to see more deeply.

I pretty much hit a wall. I did not ever leave my rational mind behind. I found myself thinking about my answers, thinking about feeling silly and how I couldn't make a certain sound because someone else in the room had made it just a few moments ago. But I saw the wall, at least, which I thought was interesting.
Posted by Steve Reed at 11:53 AM