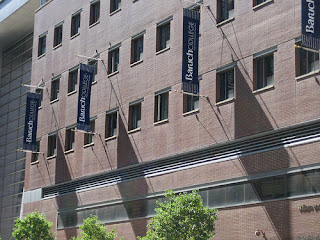 I’ve had a busy Broadway week. I went to see “110 in the Shade” on Tuesday night, with Audra McDonald, and it was terrific. For some reason I was initially kind of lukewarm about seeing it, but her accolades are well-deserved - she puts such incredible energy into her performance. The rest of the cast is excellent as well.

Last night I went to see “Frost Nixon,” the play about David Frost’s legendary TV interview with Richard Nixon in 1977. Again, more good performances, but I thought Michael Sheen as Frost was stronger than Frank Langella as Nixon - and Langella won the Tony. Go figure!

Now I’m off to Southampton to spend the weekend with some friends. I think I need a bit of a blog break, so I’ll be away from the blog (and Flickr) until Monday. In fact, I may not even take my camera - SHOCK.

Have a great weekend everybody!
Posted by Steve Reed at 11:34 AM