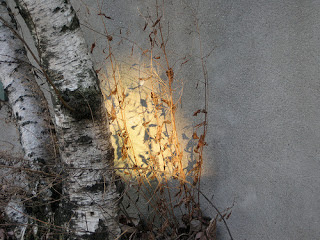 I finished my Paul Bowles novel last night; what an excellent writer! The passage I gave you yesterday really spoke to me, partly because it’s so Zen in its admonition to pay attention to life and acknowledgment of how hard it can be to do so, but also because I’ve been feeling that way myself lately. Time is passing! Am I paying attention?

There were lots of little Zen moments in “Let it Come Down,” although the characters are seriously flawed. (Even worse than most of us, I suspect, though I suppose it wouldn’t have been a very good book if they weren’t.) Bowles is such a nihilist -- no one ever comes to a good end.

Yesterday we had more snow than I’ve seen so far all winter. It began coming down in the afternoon, whitening the sky outside the glass walls of my office. As I walked home I noticed that the falling snow became blue in Times Square, reflecting in mid-air all the neon and the lights from the jumbo video screens. Kind of a cool effect!

The office building where I work has an atrium that’s carefully planted with moss and eight birch trees. It’s kind of our own little Zen garden. Those birch trees looked so great in the snow -- a slice of New England in Midtown!