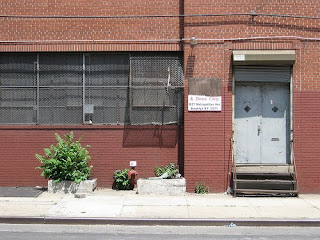 I was introduced to a new art form last night when I went to a competition sponsored by Drum Corps International at Giants Stadium. It's kind of like watching a series of stadium half-time shows on steroids, and I don't mean that in a bad way. The bands participating are incredibly well trained and outfitted, and have perfect timing and movement, with elaborate flag-waving-and-throwing groups known as Color Guards. It was spectacular!

It seemed from my untrained perspective to be a uniquely American art form -- a combination of ballet, Broadway stage spectaculars and athletics. So many people think of marching bands merely as support for the football team, and this showed what bands can do on their own, propelled by nothing more than a desire for excellence in music and showmanship.

It was also interesting that the Color Guard groups work with artificial rifles and sabers, twirling them like batons and throwing them high in the air. I guess this is an outgrowth of the military traditions behind marching bands, and to me it's kind of funny that they're throwing around fake guns -- but Dave said he doesn't even really think of them as guns anymore, but as their own unique props in the show.

Anyway, it was a really terrific evening. I had a great time, and it's yet another example of how Dave and I are showing each other things that we wouldn't have experienced otherwise.