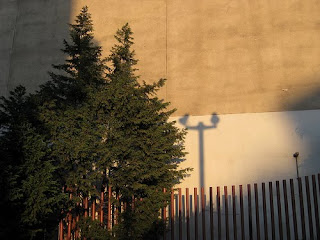 -- My friend Reya pointed out a Web site that will create an anagram of your name. When I entered my full name, Stephen Gager Reed, it came up with "REPRESENT EGGHEAD" -- which is more brilliant than you could ever imagine, given that one of my childhood nicknames was "Egghead." (Not a particularly complimentary nickname, but hey, I own it.)

-- I saw "Moon" last night, a movie starring Sam Rockwell about an astronaut living by himself on a mining colony on the lunar surface. It was good and well produced, with excellent effects depicting the bleakness of an industrial facility on the moon, but it was emotionally pretty dark. Definitely not a happy film.

-- Went to dinner last night with my friend David at an Italian place, where I had seared tuna with broccoli rabe. Broccoli rabe is probably my favorite vegetable, and it's sadly underappreciated.

-- Ran into Stuart again on the sidewalk as I was walking to the movie. It's so funny that I would see him that way just a day after having lunch with him (see previous entry), and after having not seen him in months. The world is so strange sometimes, isn't it?

-- Meeting up with my Dave and his friend Kellee today for some fun in the city. We may try to have lunch, and we'll definitely get together tonight. Then it's off to Jersey for the weekend!