Surreal Saturday, and Julia too 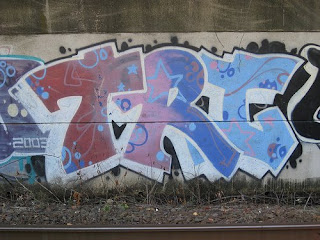 So here's a brief summary of our Surreal Saturday: Dave and I got an 80-minute massage in the early afternoon, and then -- perhaps slightly woozy from over-relaxation -- set out for a pool party at a friend's house in Pennsylvania. We drove and talked, talked and drove, and only after a considerable distance realized the trip was taking far too long. Consulting a map brought us to the horrible realization that we were on the wrong road entirely, and were south of Camden, New Jersey, which was considerably out of our way.

So we pulled over and made a brief detour through beautiful scenic Camden, which wasn't nearly as fearsome as I thought it might be, and took the Ben Franklin Bridge into downtown Philadelphia to head back north again. Then we realized we were almost out of gas, so we pulled over in north Philly and began cruising side streets for a gas station. We asked directions from some guys hoisting car parts in the street, and eventually made our way to the only readily visible gas station for miles around, where we became victims of what I'm told is a common Philly scam -- a man unaffiliated with the gas station pumps your gas and then demands a tip. (We didn't completely become victims, because I refused to tip him.) We were also assailed by a tattooed, narcotized woman -- wearing Daisy Dukes and a rhinestone choker that said "sexy" -- who wanted $5 to fill her tank. (I would have given it to her if I'd had change.)

Finally we made it to the party, which mostly entailed eating Dave's wonderfully light grilled salmon dinner and drinking lots of wine. (I did swim briefly, but that pool was DARN cold.) Late that night Dave and I headed back home again and stopped at a Wawa, which is sort of a fancy 7-Eleven, to get some ice cream. We grabbed some pints of Ben & Jerry's, went to the cash register and had a hilarious exchange in line with a girl who claimed to be a beauty pageant contestant. She showed us a photo of her dress -- an amputated black prom gown with rhinestone trim. Dave gave her extensive fashion advice, but speculated afterward that her lazy eye might detract from her overall score.

We came home and ate our pints of ice cream, and I confess I felt a little guilty about it -- it's been ages since I've just snarfed down a pint of Ben & Jerry's in front of the television. (But it was great!)

Then, today, Dave and I went to see "Julie and Julia," the new movie about Julia Child and a blogger who cooked her way through Julia's "Mastering the Art of French Cooking." It was a terrific movie. I came away with a powerful message about couples and the ways they can support and inspire each other. Of course, part of that feeling came from seeing it with Dave. I saw so much of what I feel for him in the way the couples in the movie interacted. I also appreciated the way Julia Child loved good food, and it made me realize I was silly to feel guilty about a pint of ice cream -- why not eat ice cream, for Pete's sake? Meryl Streep does an amazing job as Julia, and I identified with Julie's compulsion for blogging, so I didn't feel -- as some have said -- that the modern storyline detracted from the Julia Child biography.

I also bought a copy of "Will You Take Me as I Am," Michelle Mercer's book about Joni Mitchell's "Blue" period, when she wrote what is surely one of the best albums ever recorded. I can't wait to read it!