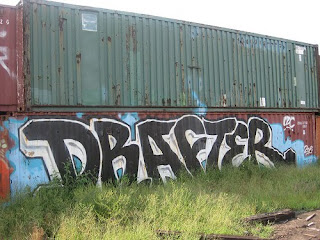 Today I came back to New York from Dave's, to spend time with the cat and prepare for a doctor's appointment in the morning. I'm on vacation this week, but because I'm an idiot, I managed to schedule the doc during my time off. Good thing I'm not going anywhere, I guess!

Anyway, on the way back from New Brunswick, I got off the train in Elizabeth, N.J., because I'd seen some good graffiti in that area and I wanted to try to shoot it. I walked the streets near the railroad tracks from Elizabeth into Newark, and I found lots of interesting stuff. It was in the low 90's today, so I got bloody hot, and I had to go through big holes in a few fences to get the good stuff. But I managed! 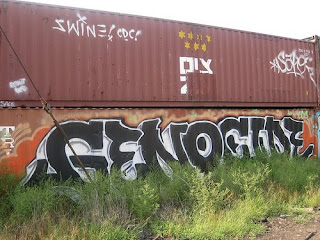 Afterwards I stopped into a Popeye's Fried Chicken and had a large iced tea, and then a second large iced tea. When I say tea I use the term loosely -- high fructose corn syrup would be more like it. But it was the best tea I ever drank!

This Popeye's was in Newark, and I saw something there I've never seen before: fast food cashiers behind bullet-proof glass. Interesting. 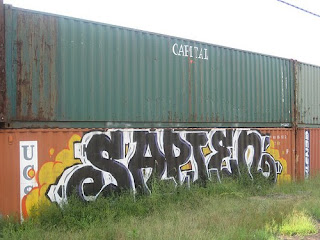 Anyway, here's some of the graffiti I wanted to shoot. I've been seeing these three boxcar-sized pieces for weeks from the train, so it was nice to get them up close!
Posted by Steve Reed at 1:50 AM