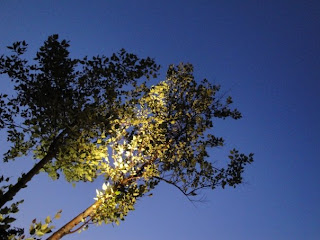 I don't have anything particularly cohesive to say today -- just some scattered stuff about my week. I'm still on vacation in New Jersey.

I mentioned going on my graffiti safari in Newark a couple of days ago. Well, I stopped off in Harrison, N.J., on Tuesday on a second graffiti run. This was yet another area where I saw lots of great pieces from the train and decided I had to shoot them up close. So I got off the PATH train, and went skulking around near the station with my camera. At one point, I think someone called the cops on me! But I got lots of good shots, which I'll be posting on Flickr.

The photo above I took at the rooftop bar of the Hudson Hotel a couple of nights ago, when Dave and I went there with Kellee. The sun was setting and the sky was a dusky blue, and this tree was lit from beneath very dramatically. Plus I'd had a gin & tonic, so it looked even MORE dramatic to me!

Today I went to the New York Sports Club gym in New Brunswick, which was a first for me -- it's swanky and clean and suburban, and I kind of missed my grubby city gym with weights all over the floor, I must admit. But it's nice to have a gym so close by that I can get into with my city membership.

I spent the afternoon reading "Guns, Germs and Steel," which I'm about halfway through. Dave and I drove over to Princeton tonight for dinner -- we found a cute wine bar and I had pizza with fig paste, mozzarella and scallions. Terrific!
Posted by Steve Reed at 3:14 AM